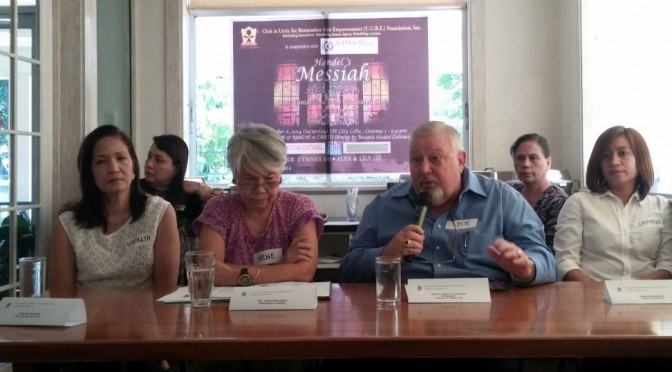 Two of the best choirs in the Philippines unite to present the popular English-language oratorio Handel’s Messiah in a Christmas concert in Cebu City on December 6, 2014.

The New Life Sounds and Coro Cantabile will perform portions of the music of German-born classical composer George Frideric Handel for the benefit of sexually abused and trafficked children in Cebu, said Pastor Nene Pagaduan of the Club in Unity for Restoration thru Empowerment (CURE) Foundation, Inc.

The Christmas concert, which will be held at SM City Cebu’s Cinema One, will have matinee and gala shows, with both choirs singing five choruses and three solos of Handel’s Messiah as well as Christmas carols, said Sharon Abesamis of the Coro Cantabile.

Proceeds of the December 6 Christmas concert will go to the building of the Rancho ni Cristo, a haven for sexually exploited kids below 12 years old, in the foundation’s 3-hectare property in Asturias, she added. 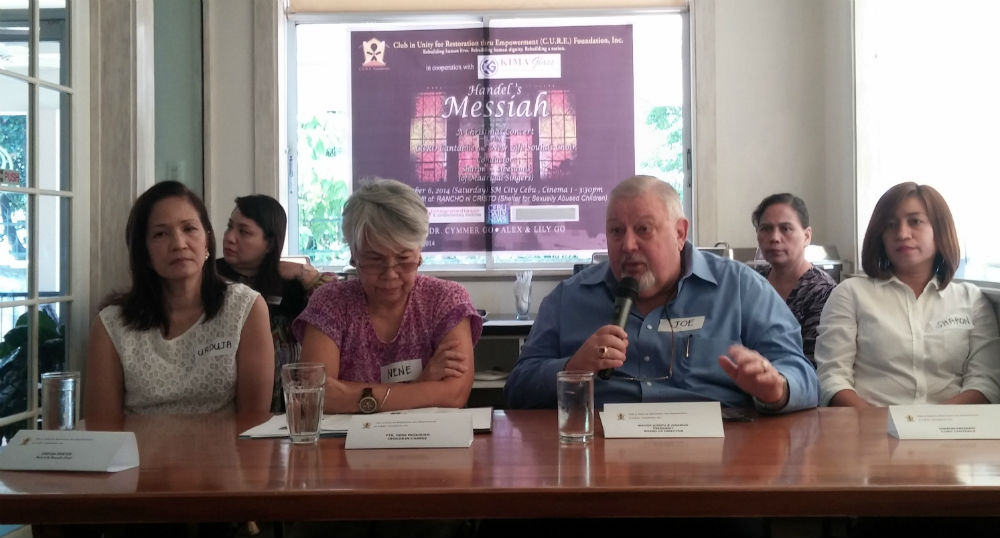 Bishop Joseph B. Disarno, CURE Foundation president, says proceeds of the Christmas concert will be for the benefit of sexually trafficked and exploited children.

Bishop Joseph B. Disarno, CURE president, said they’ve started constructing two buildings and will need a third more before they can start initial operations by the first quarter of 2015.

“The three buildings are only the beginning. We intend to start small, with six children, and expand as we gain more expertise,” he explained. The first building will be for maintenance, the second for admin staff, and the third will serve as the orphanage.

According to Disarno, the foundation’s goal is to build 10 houses that can each accommodate 10 children. Since a building costs around P1.8 million, completing the Rancho ni Cristo will probably take about five to six years, he explained.

The Christmas concert Handel’s Messiah, which aims to sell over a thousand tickets, is one of the foundation’s fund-raising activities, said Urduja Santos of the New Life Sounds choir. The matinee starts at 3 p.m. while the gala begins at 7 p.m. Get tickets for the best seating for concerts at a low price.

Pagaduan added that tickets will be available during the first week of November at the Maranatha World Outreach Center along V. Gullas corner P. Burgos streets. Those interested in watching the concert can reach them at +63-32-520-5164 or +63-32-253-2491.

According to her, they will arrange to have more outlets available soon to make it easier for people to buy tickets for the Christmas concert.

Ticket proceeds will go towards completing the Rancho, which will enable the CURE Foundation to work closely with Cebu local officials and the Department of Social Welfare and Development (DSWD) in helping with the healing of children below 12 years old who are sex trafficking and cybersex victims, she added.

The New Life Sounds and Coro Cantabile choirs will be bringing their excellent music together to perform Handel’s music.

New Life Sounds, headed by Santos and made up of Christian men and women, has served heart-touching beautiful music to people in Cebu and several times in the Senate.

On the other hand, the Coro Cantabile headed by former Madrigal singer Sharon Abesamis is a Filipino Christian A capella singing group composed of people from different walks of life. With its wide repertoire of classical, gospel, pop, OPM, international, and local folk songs, the Coro Cantabile has sang at different events both locally and in other countries.

The Coro Cantabile went on a European tour in 2005 when it was awarded a gold medal by UNESCO in Athens, Greece. Everything Yummy in IT Park perfect for small groups 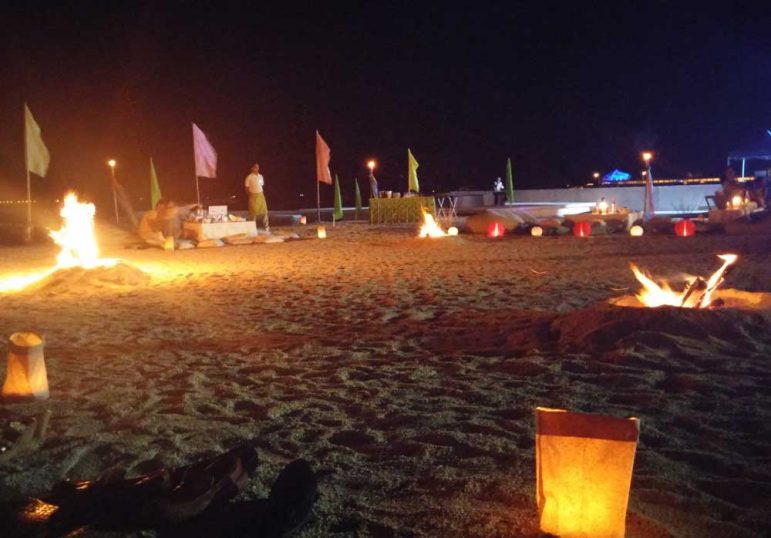 Be Resorts holds Bonfire Fridays weekly up to December

Out on the wide white sandy beach and under a clear starry sky, we lounged about on native handwoven mats, roasted marshmallows on a large…