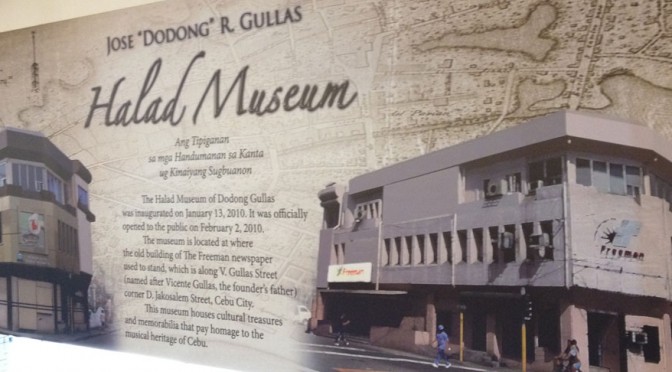 The museum displays memorabilia of Cebuanos who contributed to the formation of Cebu’s musical culture with their compositions celebrating the Visayan language and their favored instruments.

Standing at a corner, a piano used by no less than Ben Zubiri, that popular ’50s-’60s Visayan entertainer and radio personality behind the timeless piece “Matud Nila.” On a glass case is an original music sheet of Maning Velez’s “Sa Kabukiran,” popularized also by his daughter, the actress Lilian Velez. Then there’s a guitar, not just anyone’s but Minggoy Lopez’s, the artist behind the folk song Rosas Pandan that has become a favorite choral contest piece even in international competitions.

MUSICAL HERITAGE. The Halad Museum displays memorabilia of Cebuanos who contributed to the formation of Cebu's musical culture with their compositions celebrating the Visayan language and their favored instruments. It is located in the old The Freeman building on V. Gullas St. in downtown Cebu City. Click on image to enlarge. (PHOTO BY MAX LIMPAG)

These are just some of the wide ranging and enduring legacies of Cebuano cultural heritage expressed through music and available for everyone to see at the museum. There are also old photographs, musical scores, lyric sheets, vinyl records, awards, and personal items from gowns to gadgets of Visayan musicians.

Behind this laudable undertaking is Jose Gullas through his Tipiganan sa mga Handumanan (Treasury of Memories) Foundation. The idea came to him in 2007 when he started a series of concerts that were to serve as tributes to Filipino composers.

Gullas explained he created the museum as a way of preserving and treasuring beautiful Cebuano songs that would otherwise have been lost or forgotten and honoring the memory of his parents Vicente and Inday Pining.

The museum has something for the younger crowd, too, with its video screens and sound stations where Cebuano classics can be played in its various interpretations — whether by Pilita Corrales, Susan Fuentes, or Dulce.

In contrast, a high-tech phonograph from Europe is also on display.

Aside from the Halad Music Gallery, the museum also hosts other exhibits including the:

A walkthrough is a rediscovery of Cebuano traditions from the distant to near past. Every image tells its story, and the photo collection depicts Cebuano life cycles, popular practices, and religious expressions.

The life of the man behind the museum. A section that traces his story, lineage,and passion.

Cebuano songs played on old-school phonographs and digital music stations. Imagine a time in old Cebu when serenades were common and expected. See a vast collection of LP records and journey back to a time when life was and afternoons were spent listening to music. Touch and play instruments like no one’s watching. Explore displays that will bring you to a magical musical journey.

Thematic exhibitions aimed at capturing the spirit of prevailing events. These change year round and promises something for everyone.

The Halad Museum is located on the corner of V. Gullas and D. Jakosalem Streets in Cebu City. The site is the old offices of The Freeman, Cebu’s oldest newspaper, and taxicab drivers know where it is. It is less than 30 minutes away from Cebu City’s big shopping malls.

As one of the highlights of Marco Polo Plaza Cebu’s Culinary Journey, the hotel asked two of Cebu’s culinary icons, Cristina “Tina” Ebrada and Señorita…

An overnight stay at the Mövenpick Hotels and Resorts-Cebu in Lapu-Lapu City comes with a free sunset cruise for local tourists. The promo is good up…