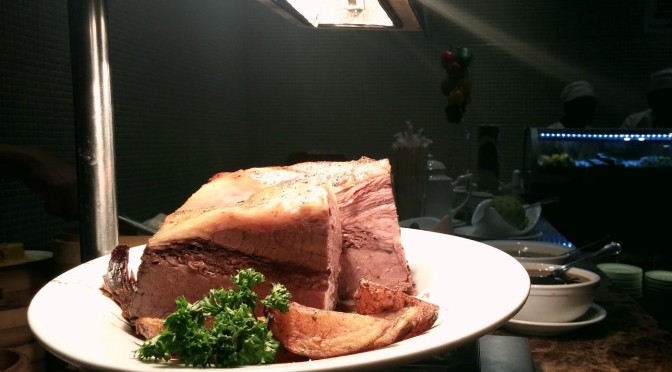 Good food at an affordable price is what Grand Majestic, one of three restaurants at the Grand Convention Center in Cebu City, aims to provide customers.

With their selection of varied cuisine, iHoldings Inc. president Winglip Chang said they’re offering what Cebuanos are used to in a buffet without them having to pay a lot.

“We want to show that a good buffet doesn’t have to be expensive,” he said.

THROWBACK PRICING. When we ate in Grand Majestic yesterday, the restaurant announced a “throwback” price of P195 for the buffet from the regular P499. The restaurant will hold more throwback pricing promotions, which will be announced on the day it happens, in the days leading to the grand launch in September.

Although many of Grand Majestic’s dishes are Chinese-influenced Filipino fare, there are sections that carry international flavors. There’s a Japanese food display, carving station for steak, as well as dessert and salad bars.

Chang said they have full-time food technologists working in the kitchen to ensure the quality of every dish served at the Grand Convention Center of Cebu.

“We make sure that the manufacturing and cooking process follows the standards,” he cited.

The two other restaurants at the newly renovated Grand Convention are Tsay Cheng and Seafood City.

Tsay Cheng is a Chinese restaurant with function rooms where small groups can meet for business or leisure while Seafood City is tailored for travelers who want to experience the fresh bounties of the sea at affordable prices. Like the popular Sutukil (for sugba-tuwa-kilaw), diners get the option of having their fresh seafood grilled, stewed or prepared as ceviche or kinilaw.

From today up to the grand launch in September, Chang said they’re running promotional campaigns that include a price throwback for Grand Majestic and discounts for Tsay Cheng and Seafood City. Each of the restaurants can seat around 300.

Chang said the announcement for Grand Majestic’s price throwback may be done on their Facebook page on the day that it happens.

Tsay Cheng diners get 10 percent off on their lunch bill until September 15, 2014 while travellers who can present a boarding pass or ticket with Cebu as destination enjoy a 15 percent discount at Seafood City.

Dessert. Have your fill of sweets at the desserts station.

Chang said they would like to compete in the MICE market and believe their second floor facilities, which can accommodate a maximum of 1,200, are well-equipped for such events.

At P550 per person for a minimum of 300 people per event, Chang said Grand Convention has the lowest charge among similar establishments. He added that although the minimum cost for a function is P165,000, they’re flexible and prospective customers may request for other arrangements.

Grand Convention has international chefs as well and can accommodate food preferences of guests.

Take a slice or two of carrot cake.

It’s hard to imagine today but the Fuente Osmeña circle was considered dangerous in the 1900s because it was far from the city center. Fuelling…

Be Resorts Mactan introduces Boodle on the Boat

Island visits, fish feeding and snorkeling, and food make up the fun experience called Boodle on the Boat that’s now being offered by Be Resorts…

3 Comments on Be Resorts Mactan introduces Boodle on the Boat
facebookinstagram
Loading Comments...