Have app, will order turkey rice 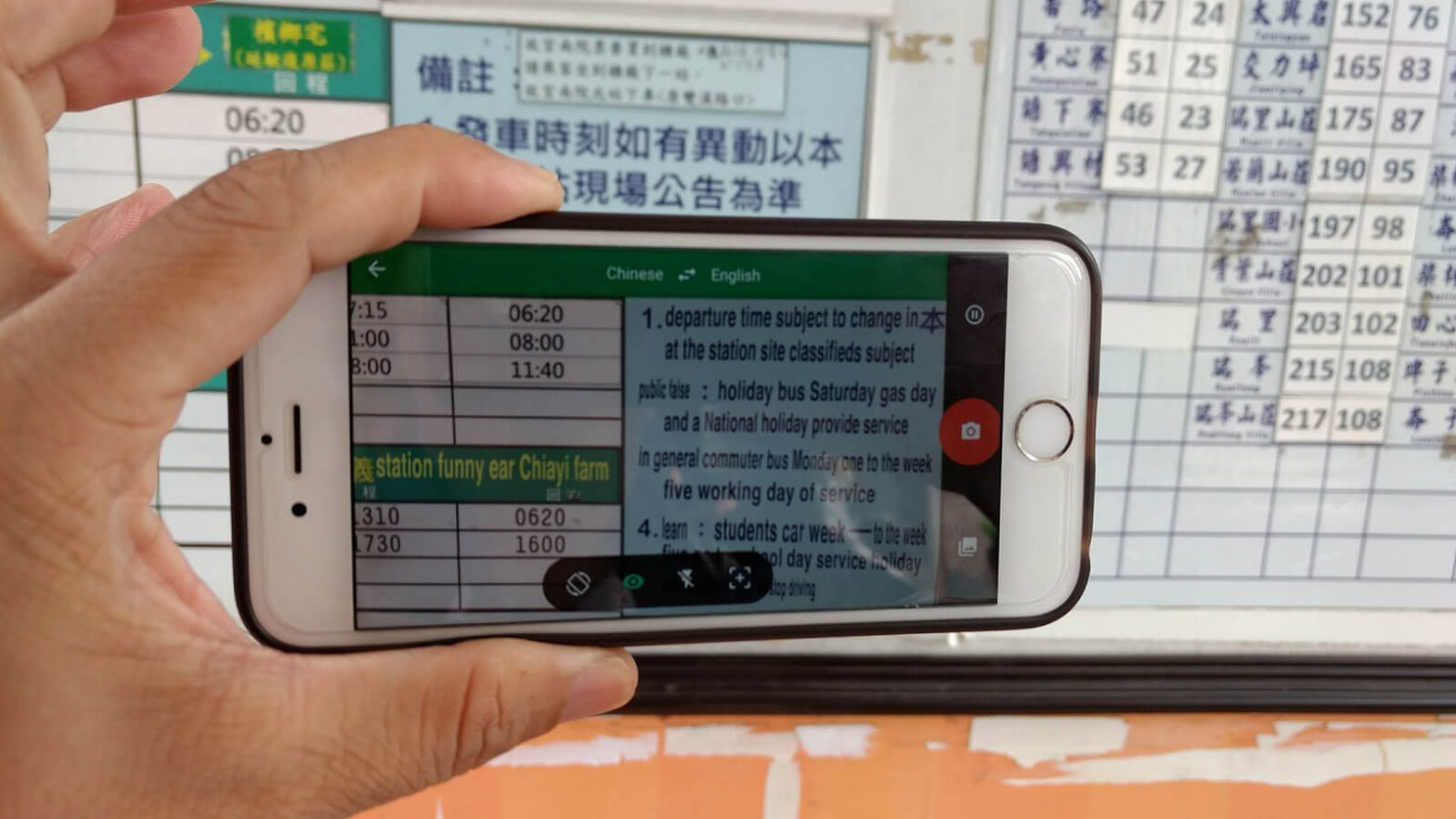 I had my first taste of Taiwanese milk tea at a shop in a train station on our way to the remote township of Alishan. My wife and I headed straight to the station from the Taiwan Taoyuan International Airport to catch the train to Chiayi in time for the last bus to Alishan.

We had time for snacks since the train was still several minutes away and proceeded to check out the food stalls at the station. There were no English signs. Unlike other destinations, English isn’t as widely used in Taiwan, whether written or spoken.

It was then that we used the Google Translate app that we downloaded prior to our trip.

The app translates in real-time and via phone camera text such as those you find in billboards, menus, and other documents. Real-time translation works in several languages, including Chinese. Apart from real-time translation, you can also choose to take a photo of the sign or document and highlight the text you want translated. 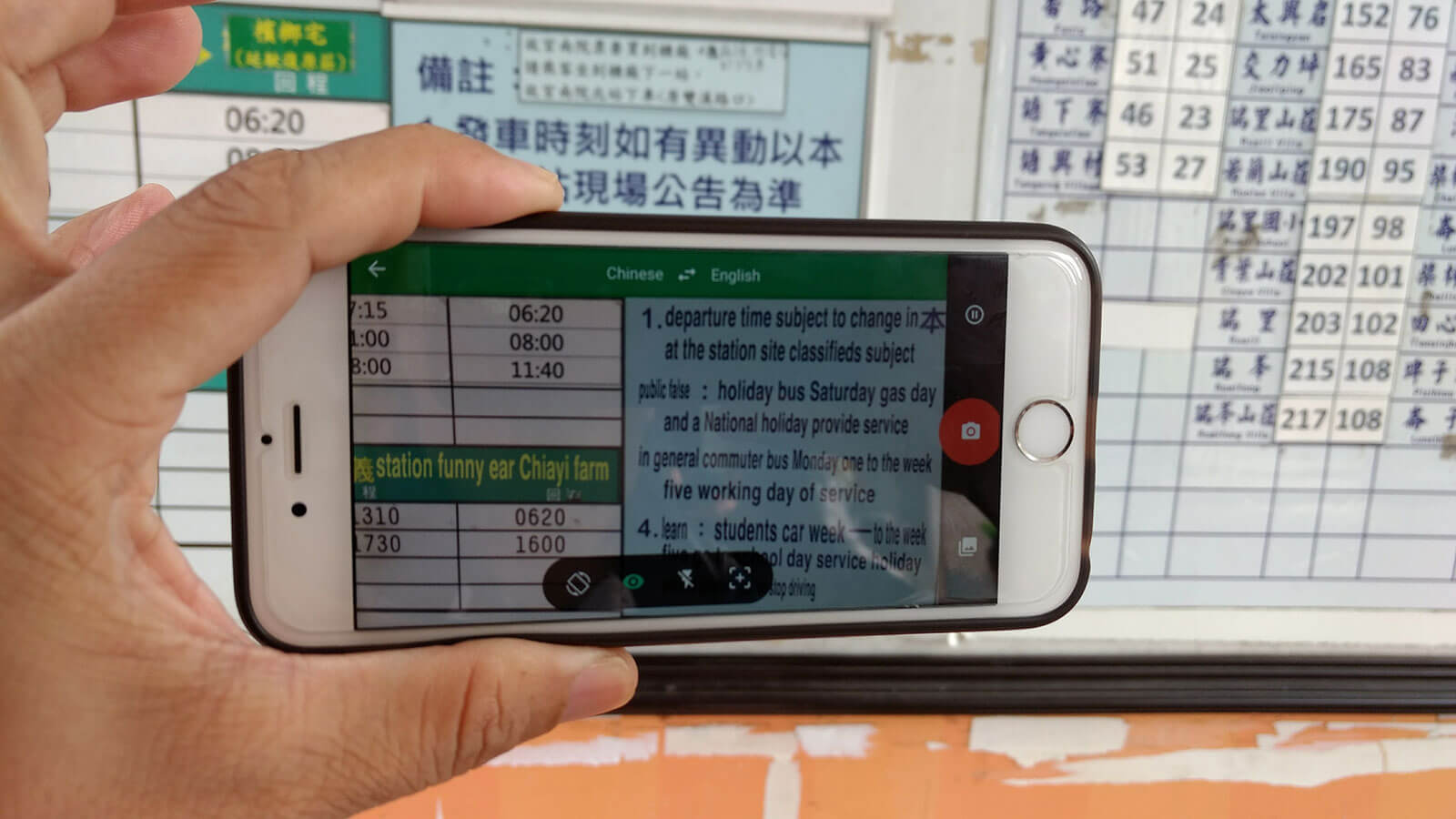 We used it to understand the signs on the different shops in that train station in Taipei. We confirmed that what looked to be pesto bread indeed was. We also used it to choose from the different varieties of milk tea sold in one shop of the station that was manned by a young shopkeeper who barely knew a word in English. In real time, Google Translate unmasked the Chinese characters in the menu of teas: honey plum, pearl pudding, vermicelli.

We then typed “less sugar” in the app and flashed its automated Chinese translation to the shopkeeper. He nodded in understanding and said “3?” We were puzzled at first until we realized they had a numeric scale for the sweetness of drinks.

Machine translation via web interfaces isn’t new. Among the first was the now defunct Babel fish by AltaVista, which is also now defunct. The initial attempts at automated machine translation were inaccurate and even outright funny. There’s a sign for what is apparently a toilet for persons with disabilities with an English translation of “special for deformed.”

But what really stuck on my mind was a restaurant banner that I found in Hong Kong that listed its menu. Below a photo of a delicious-looking chicken dish was the phrase “saliva chicken.” I wasn’t using Google Translate then so I wasn’t able to confirm the translation at that time. I had half a mind to go local and go inside to try it. I chickened out. I later learned that the closer translation should have been “mouth-watering chicken,” a famous Sichuan dish. 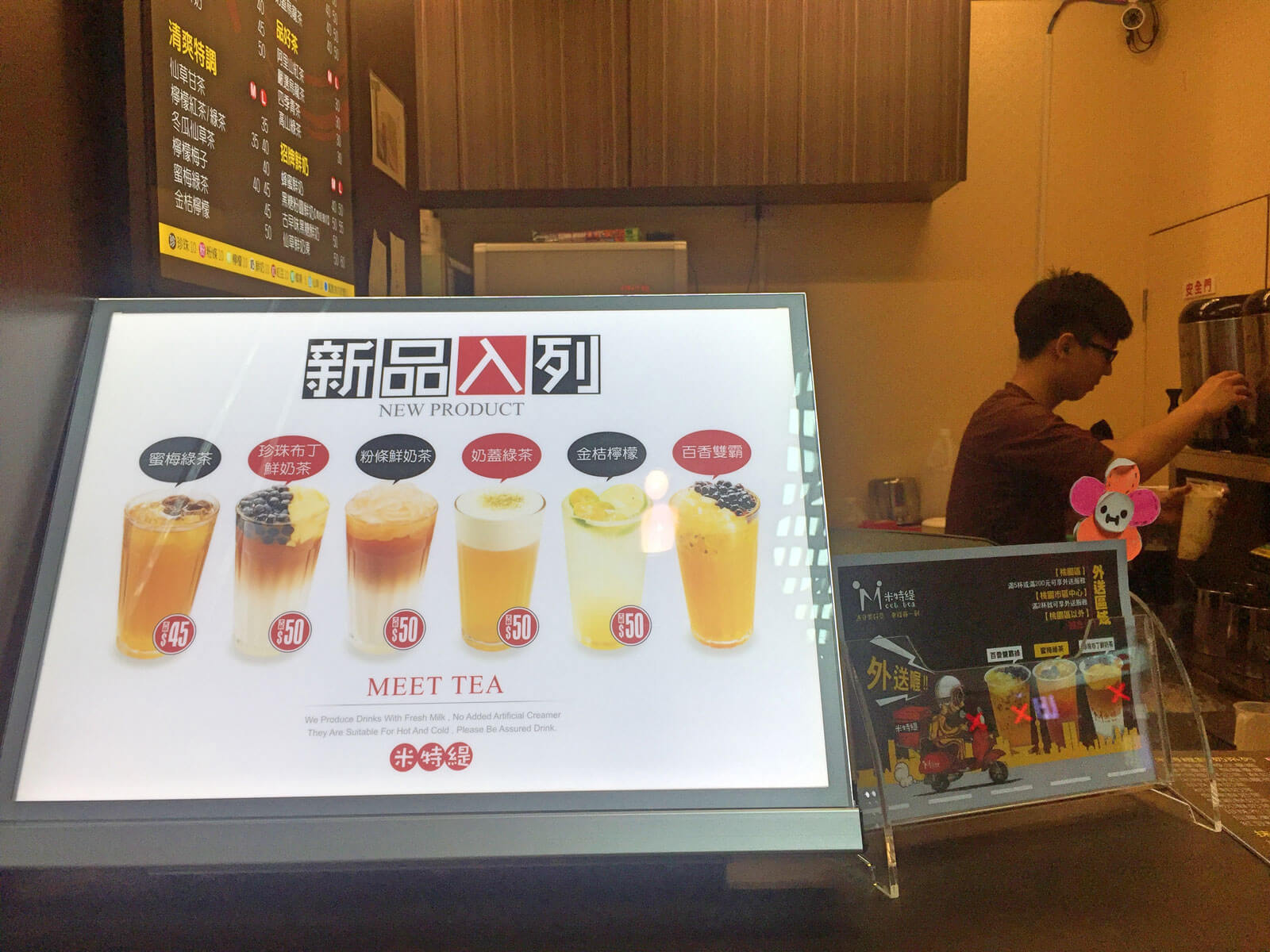 MILK TEA. There were only a few words in English in the food stalls in the train station on our way to Chiayi City in Taiwan.

In our Taiwan trip, Google Translate was of great help fathoming the signs all around us. We used it to check and double check bus schedules and directions. It wasn’t totally accurate, often you have to figure out the bits and pieces of words and phrases, but it was good enough to get by.

Dr. Raymund Bontol used it in a recent family trip to Japan and found it indispensable. He also uses it for online shopping in sites without English translations. And in an ultimate vote of confidence, Bontol also uses it to communicate with Korean patients. 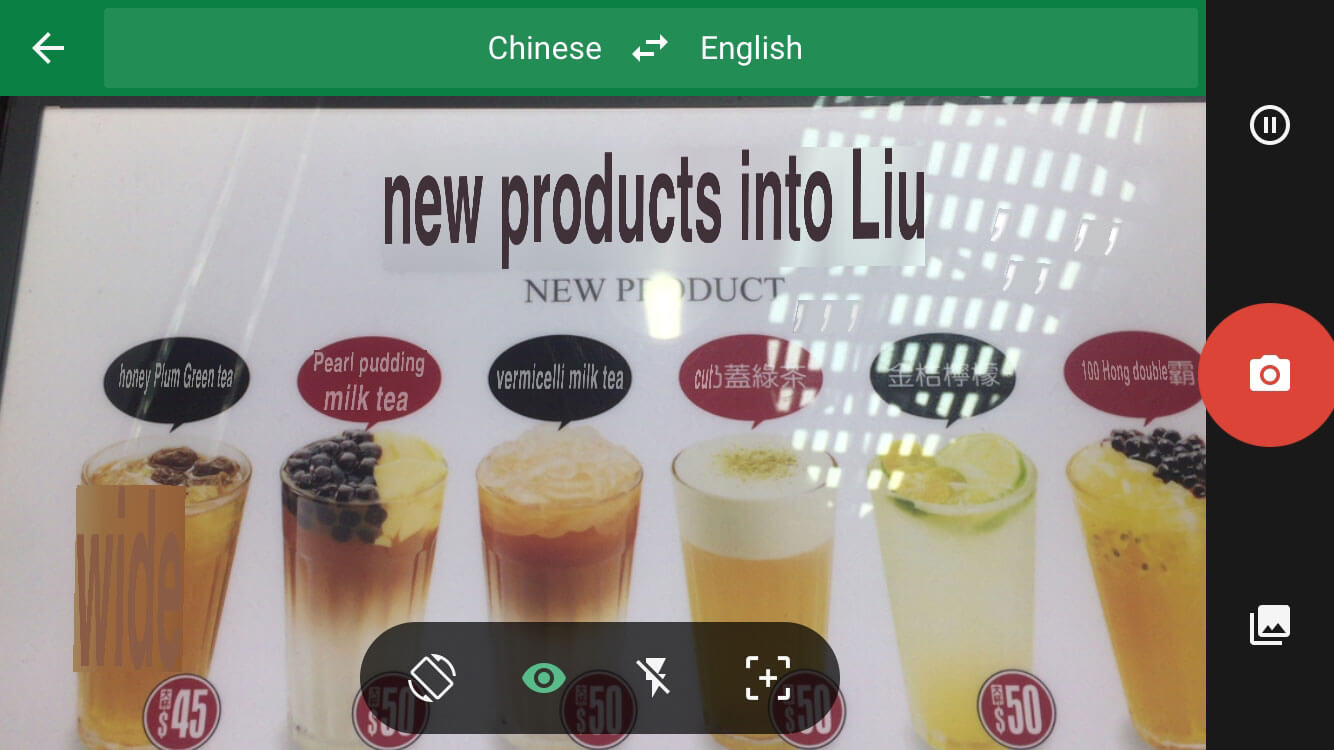 What makes Google Translate very useful is that it’s mobile. Its Android and iOS apps aren’t pared down version of the website service – these are actually more powerful iterations with its mobility and capability to use the camera. If you download the available language packs, translations are faster and can be done even without an internet connection.

When we were in Chiayi waiting for the train back to Taipei, we had some time for lunch. We decided to look for a specialty of the region: turkey rice. Google Maps took us in a circuitous route to nowhere and, in exasperation, we finally stopped at a non-descript eatery near the station. There was a huge turkey in front of the counter. As with many Chinese restaurants abroad, you order by filling up a slip. By scanning the slip and then double-checking by asking the person at the counter, we managed to get our bowls of turkey rice.

Peek into the future

While useful right now, Google Translate offers a peek at a future of instant machine translation. Google says the app can do spoken translation. I haven’t tried it yet.

It would have been useful in Ximending when I ordered for breakfast a wrap of vegetables and some meat from a street stall. The woman preparing the dish asked me a question in rapid Chinese. The only word I caught was “chicken.” 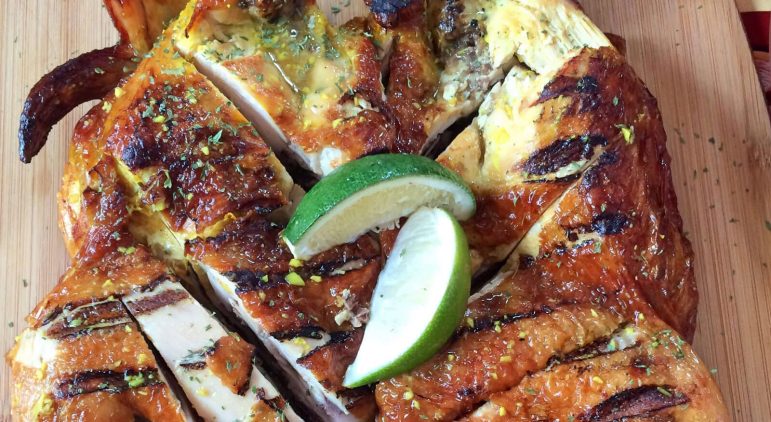 Peri-Peri Charcoal Chicken and Sauce Bar gives Cebu one more dining option and brings to the island the best of Portuguese and African flavors. The… 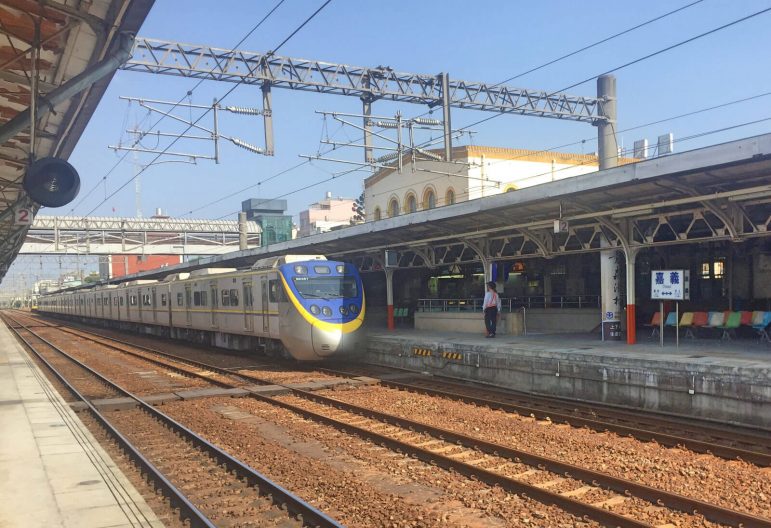 How to get to Alishan in Taiwan

There is a wide range of options for getting to the Alishan National Scenic Area in Taiwan. The first step will be to get to…