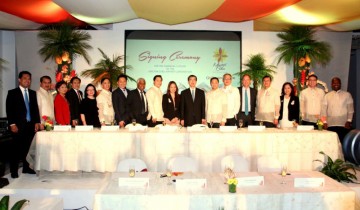 GMR-Megawide celebrated a collaboration with the Asian Development Bank (ADB) and a consortium of Philippine banks that ensure solid funding for the rehabilitation and expansion of the Mactan-Cebu International Airport (MCIA).

Executives of ADB and six Philippine banks and officials of GMR-Megawide Cebu Airport Corp. (GMCAC) recently marked the project’s financial closure with a ceremonial signing of the Omnibus Loan and Security Agreement (OLSA).

GMR-Megawide executives sign loan agreement with officials of ADB and a consortium of six Philippine banks for Mactan airport project.

The OLSA allows the corporation to cover 70 percent of the total Mactan airport project cost, a press statement from the company said.

It was amended in January 2015 to include the $75 million loan for the airport project from ADB, the biggest social development funder in the Asian region. ADB and the six big Philippine banks provide a total of P23 billion in debt financing to GMR Megawide for the project.

GMR Megawide was represented by its President Manuel Louie Ferrer and Chief Executive Adviser Andrew Acquaah-Harrison during the ceremonial signing at the Mactan airport last February 18, a company statement said.

It added that ADB President Takehiko Nakao and the presidents or key officers of the banks participating in the consortium attended the milestone event.

Undersecretary Jaime Limcaoco of the Department of Transportation and Communications and Public-Private Partnership (PPP) Center Executive Director Cosette Canilao were also in attendance.

The support of the ADB and wide participation of Philippine banks in the financing of the MCIA expansion is a validation by the banking industry of the financial viability of the MCIA project and its role in the growth of Cebu and the rest of the Philippines, Ferrer said in his welcome message.

He stressed that infrastructure improvements boost the country’s growth, “particularly in tourism and other key sectors that create employment opportunities and promote sustainable and inclusive economic progress.”

With Cebu contributing 6.2% to the Philippine gross domestic product, the expansion of MCIA is considered a significant catalyst to economic development.

Citing that the Philippines was ranked in 2014 by the World Economic Forum 113th out of 148 countries in terms of airport transport facilities, Ferrer says the MCIA is poised to raise airport standards through “hard work” and “genuine, impeccable service.”

He added that GMCAC is mindful of “the chance we have been given to improve, not only this facility, but also the country’s competitiveness in airport infrastructure.”

The concession will effectively expand the annual passenger handling capacity of the MCIA from its present 4.5 million to 12.5 million. The existing terminal currently operates well above its capacity with about 7 million passengers yearly.

GMCAC was formed after the consortium of GMR Infrastructure Ltd. of India and the Philippines’s Megawide Construction Corporation was awarded the concession for the renovation and expansion of the country’s second busiest aviation hub.

Under the concession agreement, it will manage landside operations for 25 years. The project is the first large-scale PPP project rolled out under the Aquino administration.

The GMR Group, with a diverse portfolio of businesses, is the world’s fourth largest airport operator. Megawide Construction, on the other hand, is recognized in the Philippines as a leader in the infrastructure sector, pioneering cutting-edge technology and innovation within the industry. (Press release)

At least 16 schools and colleges in Cebu received around 6,000 books from the Moneygram Foundation during a recent turn-over ceremony attended by its celebrity…

For allegedly raping three girls—his two stepsisters aged six and seven, and their cousin aged three—a 17-year-old boy was taken into custody by the police….