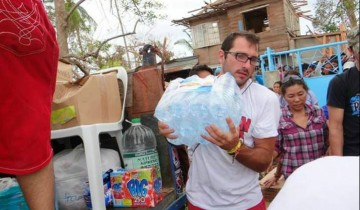 In what is believed to be a case of mistaken identity, a German national was fatally shot inside a fastfood outlet in Talisay City. Two other foreigners, whom police said were the actual targets, were injured in the shooting that happened after an argument.

Meanwhile, Talisay City Mayor Johnny de los Reyes did not show up for a signing of an agreement, which angered the investor and cost Talisay City nearly P10 million.

Primary Homes, which sponsors the Cebu News Digest, prides itself as being “your reliable partner” in building your dream home. In Cebu City, it has The Courtyards at Brookridge, “a mix of three-level and four-level walk-up condo that answers the challenges of the enclosed spaces of high-rise buildings. It also features al fresco courtyards and landscaped gardens where you can rejuvenate amidst lush greenery out in the open.” Open space living is what life at The Courtyards is all about. Check it out in the company’s website.

German engineer killed in shooting in McDonald’s in Talisay City, 2 other foreigners hurt

Henry Haffner, 31, a German engineer who frequently visited the Philippines for volunteer work, was fatally shot at dawn yesterday inside a fastfood outlet in Talisay City after an argument broke out involving customers in the next table.

He was mistaken for another foreigner who had earlier tangled with the assailants. The police believed that Haffner was only mistaken for a friend of the two foreigners. He died of multiple gunshot wounds.

VOLUNTEER WORK. German engineer Henry Haffner was a frequent volunteer for relief efforts in the Philippines. He was killed yesterday in a shooting in Talisay City. (Photo posted by Volunteer in Cebu, who said Haffner was one of their volunteers)

The shooting was captured on the fastfood outlet’s security camera. Cebu Daily News reported that the men taunted the 2 “dili pautang … pautanga mi, Turko! (He won’t lend us money… give us a loan, Turk)” playing to the local stereotype of Indian nationals as moneylenders. Sun.Star Cebu said the argument broke out when the locals made a snide remark after Saparaiya ordered garlic rice.

Talisay City Police arrested one of the suspects, identified as as Allan Velos, 35, of Barangay San Isidro, Talisay City.

He was identified by a witness as one of the those who shot the foreigners. Dayon said the witness was about to go inside McDonald’s when the shooting broke out. The witness, who knows Velos, saw him during the shooting. Dayon said Velos was involved in several robberies and a shootout with Talisay City policemen last January 22.

German national who was killed in McDonald’s was a frequent volunteer who helped survivors of Bohol earthquake, Yolanda

Talisay City Mayor Johnny de los Reyes did not show up yesterday for the signing of an agreement with Asian Marine Transport Corp. who wants to lease the City’s idle fish port spans 24,846 square meters.

“I think the City is sick… I don’t know what kind of professionalism. Di man ni mahimo nga ingon ani (This is not acceptable), there’s something wrong here… If this is the way they run their city, I don’t think any investor would like to invest here.” –Asian Marine Transport Corp. CEO Paul Rodriguez

City Attorney Alfredo Sipalay said that the mayor wanted some changes in the contract, including P1.098 million (computed at US$1 per square meter) as monthly rent instead of P800,000 as offered by Asia Marine.

The Freeman: No Charter Day for Cebu City Hall employees

The Freeman: Board of Investment Cebu exports more pledges this year

Nancy swims with words, day in, day out. She owns and writes for The Memoriter Writing Service, a duly registered professional service provider that offers to write high-grade content for business owners, organizations and individuals across varied platforms.

It began with an eye dotting ceremony for the guests of honor, was followed by the lion dance and firecrackers, moved on to the Yee…

The Filinvest Group of the Gotianun family from Cebu will beef up its mall portfolio this year. Festival Supermalls Inc., the wholly owned subsidiary of…