In Oslob, Fr. Bermejo looks out to sea he protected in his lifetime Just outside the compound of the Inmaculada Concepcion parish church in Oslob, southern Cebu, stands a forlorn statue of a slightly hunched priest holding a cross — as if to offer a blessing — while looking out to the open sea.

The statue is that of Fr. Julian Bermejo, an Augustinian priest who played a pivotal role in protecting Cebu and other parts of the Visayas from devastating Moro raids in the 19th century.

He was called “El Padre Capitan” and served as the commander-in-chief of the defense network, centered in nearby Boljoon, against Moro raiders who staged regular pirate attacks for looting and slave raiding, said Paul Gerschwiler in his book “Bolhoon A Cultural Sketch.”

Behind his statue are the ruins of a watchtower, a defensive structure that he organized into a grid that served as sentinels against the marauding Moros. That network and the defensive system he set up ultimately stopped the pirate raids in the middle of the 19th century.

Bermejo was born in Pardillo, Ciudad Real, Spain in 1777. He entered the Colegio de los PP. Agustinos in Valladolid Spain when he was 15 and made his religious vows the year after on July 25, 1793.

He sailed for the Philippines in December 1795 and arrived in Manila the following November. He finished his religious studies at the Monastery of San Pablo, known today as the San Agustin, in Intramuros, Manila.

Fr. Bermejo then went to the convent of the Santo Niño de Cebu where he learned Cebuano. This was common among Spanish missionaries, wrote Fr. Jose M. Cruz, S.J. in his foreword to the seminal book Barangay Sixteenth-Century Philippine Culture and Society by William Henry Scott. The missionaries thought that with the large population of locals “it was more efficient for them to learn the local languages than to teach Spanish to the entire native population.”

The priest from Spain organized the defensive network of watchtowers and bulwarks that ultimately stopped pirate raids in southern Cebu and other parts of the Visayas.

On October 9, 1802, Fr. Bermejo took over the parish of Boljoon. The church was still unfinished when he got into town. The previous structure was razed in a devastating raid in 1782.

In that raid “Bolhoon was reduced to ashes almost in its totality, with the parish house and church plundered and set on fire, saving only some sacred clothes and the image of the Patrocinio del Santisima Virgen, the titular patroness of the town.”

Bermejo, according to Gerschwiler, “was a man of enormous valiant willpower, a leader with great talent and industriousness.” Beyond the spiritual needs of his parishioners, “he worked with immense personal energy and dedication for their material welfare and their safety and defense.”

Boljoon was vulnerable to the slave raids by Moros from Mindanao. The town “never grew in population due to the frequent piratical incursions where many of its people were captured and carried away,” Gerschwiler wrote. The Moro raiders enslaved townsfolk, mainly to sell as laborers for tea plantations throughout the region. Demand for tea was booming.

To protect the town, Bermejo set up defensive structures. He built “a fort around the church complex that formed a quadrangle, reinforced in its four angles by bulwarks.”

The El Gran Baluarte that you see today was finished in 1808. The ground level was a store room for weapons and held a prison cell while the upper level, which serves as belfry today, was armed with cannons. Bermejo also had a baluarte built on Crag or the top of Ili Rock.

Gerschwiler wrote that baluartes had been built even before Bermejo came south, but these were individual fortifications that were ineffective against the raiders. Bermejo’s innovation was to set up a system that connected various watchtowers in different locations into a defensive network and the organization of local militias to fight the pirate raiders.

The system was put to test in 1813 when seven Moro pancos attempted a raid on Boljoon. The sentinels caught sight of them and the watchtowers sounded out a warning. A fleet of barangayanes was then launched to pursue the raiders. They caught up with them off Sumilon Island, where a fierce battle broke out.

Markers based on Bolhoon A Cultural Sketch

The Boljoon fleet sank three Moro pancos and took one as booty. The three others managed to escape, “heavily damaged yet still strong enough to bring the surviving Moros back home to tell the sad story of their disastrous defeat.”

The Boljooanons sailed home victorious, hanging the head of the decapitated Moro leader Gorandeng to the mast.

“The bravery and dexterity in battle of the Boljoanon fighters caused much consternation among the Moros and from then onwards no Moro ever dared to step into the shores of the town.”

“Boatbuilding had become a flourishing industry in Bolhoon. A great number of barangayanes were built and sold to other islands and divisions,” Gerschwiler wrote.

The Moro raids dwindled. It ended when Spaniards brought in steamships that could outsail even the fastest pancos.

On February 16, 1848, Governor-General Narciso Claveria led an attack staged via steamships on the Moro stronghold of Balanguingui. When they were victorious, they made “a several-hours stop” in Oslob, where they were received by Fr. Bermejo and town officials. It was “one of the last highlights of Fr. Bermejo’s eventful life,” Gerschwiler said.

He led the attack, mounted from steamships, on the Moro stronghold of Balanguingui, finally ending pirate raids in the south. After their victory, he stopped by Oslob and was received by Fr. Julian Bermejo.

Bermejo was elected provincial prior in 1837 but resigned after two years because of ill health.

“His excessive work, his many arduous travels by land and by sea, which we read about in his letters, had taken their toll and gradually weakened his health,” Gerschwiler wrote.

But there are those who said that ill health was just part of the reason. Bermejo felt homesick for Boljoon and wanted to return to the town, which he did in 1839, the same year he resigned.

According to Oslob parish records, Bermejo was one of three church officials nominated by the Bishop of Cebu to the King of Spain to become the first Bishop of Jaro in Iloilo.

Fr. Bermejo was also described as being “very dedicated to the proper education and schooling of the children of his parish. He even produced ink for his pupils.” The ink, according to Gerschwiler, was lasting. “His letters, today preserved at the Museo Naval in Madrid, still look very good. Nothing has faded to the present day.”

Bermejo died in the Monasterio del Santo Niño on April 30, 1851. 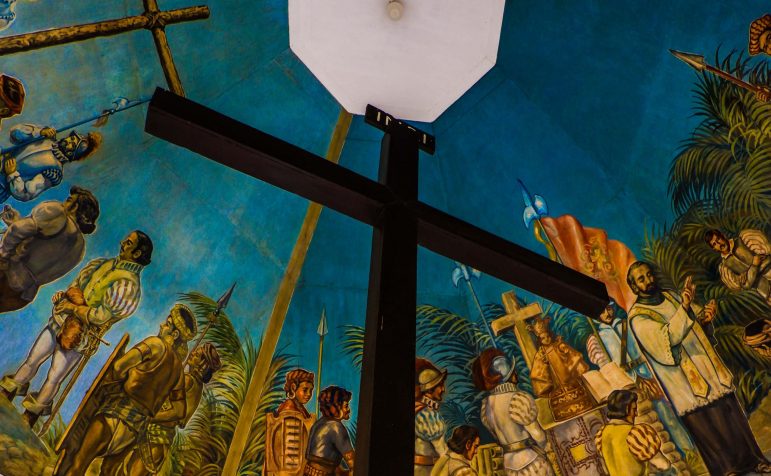 Augustinian friar Santos Gomez Marañon, who served as bishop of Cebu from 1829 to 1840, granted the Magellan’s Cross plenary indulgence to those who pray…