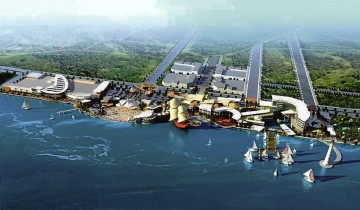 The Filinvest Group of the Gotianun family from Cebu will beef up its mall portfolio this year. Festival Supermalls Inc., the wholly owned subsidiary of Filinvest Land Inc., said it will bolster its presence nationwide with the launch of new malls in Cebu and Laguna and the expansion of its flagship mall, Festival Supermall in Alabang, Muntinlupa.

Festival Supermall’s expansion and the opening of the Il Corso at SRP in Cebu City and Brentville’s Village Front in Laguna will increase the gross leasable area of Filinvest by nearly 60 percent to 219,195 square meters from 134, 090 square meters.

With Lantaw at SRP already operating at Il Corso, the mall within the 50.4-hectare business and residential community City di Mare (City by the Sea) of Filinvest opened recently its second restaurant, the Parilya (Lechon • Seafood • Grill) operated by the Laguna Café Group.

IL CORSO. An artist’s perspective of the Il Corso at SRP in Cebu City.

“The Central Piazza where the main entrance and amphitheater are located has started to welcome guests,” said Filinvest Land senior vice president for commercial center and retail management Joy Polloso.

The first tranche of the Il Corso development will be a central area with two buildings which will showcase Cebuano-artisan food concepts, she added.

“We would like to attract not just the locals but also the tourists that abound in Cebu and the region. We envision Il Corso to be Cebu’s newest, unique, refreshing dining, shopping and recreational destination,” Polloso said.

Among largest in Asia

Also, with a gross floor area of 328,756 square meters upon completion of its expansion area, Festival Supermall is seen to be in the top 25 largest malls in Asia and one of the top five in the Philippines.

Meanwhile, Filinvest announced it also has two more malls in the pipeline for 2016.

Fora, a mixed-used development of Filinvest in Tagaytay City, will have 32,000 square meters of retail and mall space.

The Center Square Community Mall in Molino, Cavite is also scheduled to be launched next year, adding 20,000 square meters in new retail space for Filinvest.

Other than Il Corso at SRP, the Gotianun-owned real estate firm has been committed to the growth of Cebu with various projects, including Amalfi Oasis and Sanremo Oasis also at SRP, and One Oasis Cebu in Mabolo, three separate exclusive, resort-style, mid-rise condo community.

Developing high-value properties in Cebu since 1997, Filinvest is also expanding Seascapes and Aldea del Sol in Mactan, and Escala at Corona del Mar in Talisay City. It has also completed the first of four buildings at Filinvest Cyberzone Cebu in Apas-Lahug beside Cebu IT Park.

In what is believed to be a case of mistaken identity, a German national was fatally shot inside a fastfood outlet in Talisay City. Two…

We know this building today to be Compañia Maritima, but in the 1930s it operated as the Shamrock Hotel. Built in 1910, this structure named…