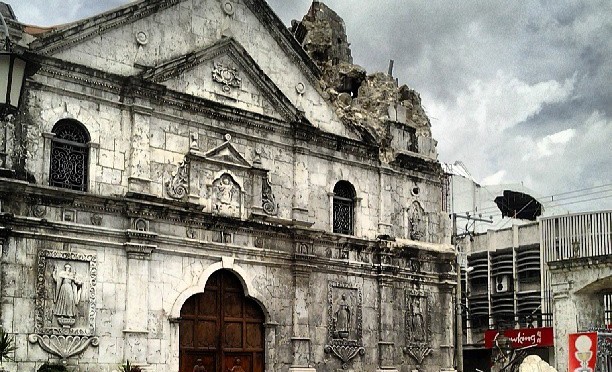 A strong 7.2 earthquake hit Cebu and Bohol at 8:00 this morning and reports have been coming in of lives lost as well as damage and destruction to commercial buildings and residential houses.

What’s also devastating are reports of destroyed and damaged heritage structures in the quake epicenter that is Bohol and nearby Cebu. Social media carry pictures and posts of the destroyed belfry in Baclayon and collapsed churches of Loboc, Loon, and Loay.

In Cebu, the belfry of the 1735 structure Basilica Minore del Sto. Niño is no more. The Sto. Niño de Villanueva Church in Pardo, Cebu City also reported damages to the facade.

In the beautiful and historic cabecera de Argao, the strong earthquake with its epicenter in Carmen, Bohol caused the collapse of a portion of the roof of the Casa Real, among the oldest Spanish period town halls still in use today.

BASILICA MINORE DEL SANTO NIÑO. Another photo of the damage to the Basilica Minore del Santo Niño. The church, which is the center for Santo Niño devotion here in Cebu, lost its belfry during this morning’s earthquake. (Photo by Bernie Arellano posted in his Instagram account)

Coral stones have fallen off from the belfry of the San Miguel Arcangel Church and in the structure’s interior.

ARGAO CASA REAL. The roof of the Casa Real in Argao which houses the offices of the Argao Municipal Government. (Photo from Jotham Saragena)

Other reports are coming in of damages to other heritage churches and structures.

I’m hoping restoration works are possible and start on the structures that can still be saved.

He hadn’t wanted the task of overseeing the Catholic Church in Cebu but has come to love the Cebuanos. When Ricardo Cardinal Vidal was appointed…

Baking the perfect Argao torta requires a confluence of several things, revealed one of the town’s top makers Jessie Magallones. The tuba (coconut wine) must…