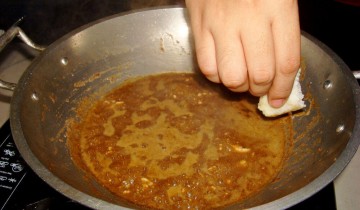 Tuslob buwa is basically puso (rice cooked in woven coconut leaves wrapping) dipped into a sauce simmering away in a frying pan, hence the name tuslob (to dip) and buwa (bubbles) or more accurately, the froth that is formed when the soup of pig’s brain with liver and spices simmers in a frying pan until it is reduced to a thick sauce.

Locals say tuslob buwa has long been plied by vendors on the streets of Barangays Pasil and Suba in Cebu City although the delicacy is also available in nearby Carbon, the city’s main public market.

The tuslob buwa of old is cooked by the vendor on a food cart with diners gathered around the pan, chasing the froth with their puso and eating it, often double- or even triple-dipping into the mixture with strangers until the puso they are holding is consumed. The buwa is free; they pay for every puso they consume at P3 per piece.

TUSLOB BUWA is eaten by dipping puso or hanging rice into bubbles formed from frying pig’s brains with liver and other spices. (Photo provided by Smart Communications, Inc.)

This version of tuslob buwa survives to this day in these barangays, where most of its patrons do not think twice about sitting or standing around a frying pan along the street and wiping it clean with puso for a tasty yet affordable meal. They appreciate that with tuslob buwa, their hard-earned peso goes a long way. Since tuslob buwa is rarely eaten alone, it also makes for friendly neighborhood encounters that lighten the rigors of the day’s work.

The rest of Cebu, though, sat up and took notice only when Azul, an uptown convenience and liquor store, offered a version of the tuslob buwa experience that was palatable to more finicky eaters. The diner and his or her friends now cook and consume their own buwa, effectively limiting the sharing (and the double-dipping) among friends.

For P100, they are provided with 12 pieces of puso, a butane-powered stove, cooking utensils and ingredients that include cooking oil, pork brain, liver, pork fat, soup stock, and spices like onions, bagoong, soy sauce and chili flakes. They mix and stir fry all ingredients until bubbles appear in the mixture, which they scoop out and eat with the puso.

TASTY MEAL ON A BUDGET. For P100, diners get 12 pieces of puso and all the ingredients for them to cook the tasty dip that completes Tuslob buwa.

Doon Po Sa Amin is the country’s first and longest-running crowd-sourcing competition designed to uncover the best and the most unique Filipino hometown stories.

Vanessa Harayo, who heads the Google Educators Group (GEG) – Sugbo community which produced the winning entry, says their group decided to showcase tuslob buwa because they are proud of this novel Cebu cuisine which has come a long way from the areas surrounding the markets of Pasil and Carbon. More places offering tuslob buwa have sprouted in uptown Cebu and in the neighboring city of Mandaue.

GEG-Sugbo community is a group of Information and Communications Technology (ICT) coordinators of the Cebu City Division of the Department of Education (DepEd). The group counts Smart as a partner in its mission to provide ICT trainings to teachers and help them use ICT tools in delivering quality education.

Harayo said that as ICT educators, they see the value of DPSA as a venue for people to use online and digital technologies to promote what is unique about their locality. Thus, their group decided to join the DPSA in the hope of giving Cebu City its first win since Smart launched DPSA in 2008.

She says they are all familiar with tuslob buwa because they often order the dish from Ronnie Perigo, a member of their team who composed and sang the song that accompanies their DPSA video entry. For a fee, Perigo would bring a set to their office and prepare the buwa for lunch. And yes, they celebrated their DPSA win with tuslob buwa, she laughs.

Harayo says they intend to join this year’s DPSA contest, which is accepting entries until September 25. All they have to do is decide on an entry with all the right ingredients for a win, just like tuslob buwa.

MyCebu.ph works with the top brands in the country to reach out to the Cebu market. For inquiries, please send an email to <strong><a href="mailto:[email protected]">[email protected]</a></strong>.

Businessman Jaime Blas Villaceran was killed in an ambush at the intersection of Colon St. and Osmeña Blvd. past 7 a.m. yesterday, shortly after he…

A labor group filed a petition yesterday for an across the board P145 increase in the daily wage of Central Visayas workers. The Cebu Labor…