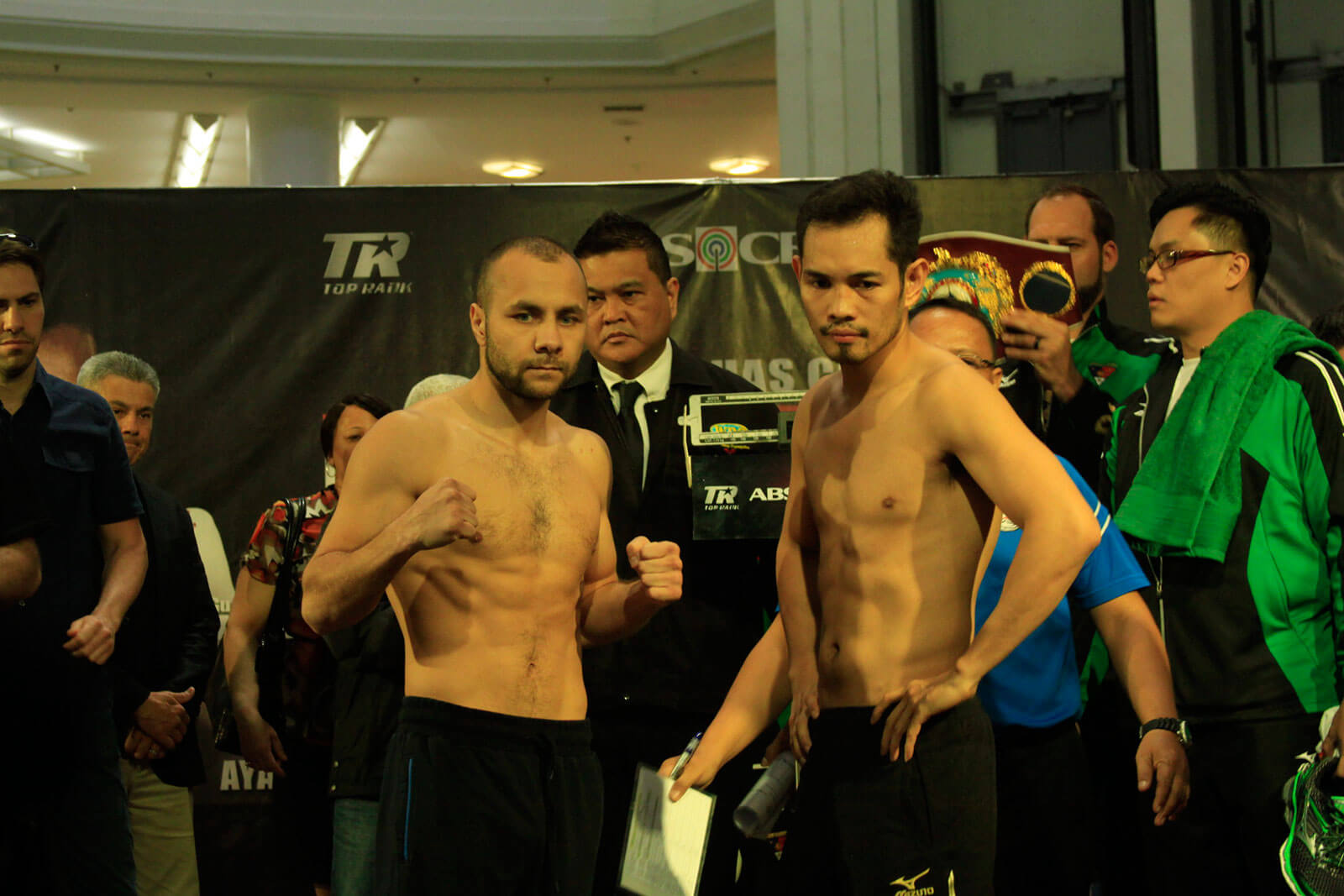 A visibly pumped Nonito Donaire Jr. is drawing energy from the home crowd, hoping for an explosive finish against challenger Zsolt Bedak in his first defense of the WBO super bantamweight title at the Cebu City Sports Center.

“I feel like there’s a fire burning inside me. Dako kaayo akong pasalamat sa mga tawo, I am very motivated because of the crowd,” the defending champion said after hitting 121 and 3/4 pounds in his first try at the official weigh-in today.

Donaire, a five-division champion with a 36-3, 23KO record, is making his first title defense of the belt he won against Cesar Juarez in his first fight in Cebu.

Zsolt Bedak, who is 25-1 with 8KOs, also made the limit easily at 121 and 1/2 pounds. He expects the fight to go the distance as he came prepared to last 12 rounds against the champion.

I CAME HERE TO BOX, that’s what challenger Zsolt Bedak (left), a technical former Olympian, said about his fight tomorrow with WBO super bantamweight title holder Nonito Donaire Jr. He said the match will go 12 rounds. However, for Nonito Donaire Sr., the trainer of the champion, the fight will end with Bedak’s knockout in the sixth round.

However, for Nonito Donaire Sr., the trainer of the champion, he sees the fight ending as early as the sixth round.

“I think it will be until the sixth round only,” said Donaire Sr.

Though he said his son is no longer looking for that one-punch KO, he still sees a knockout win.

“It’s not like before that he’d go in and throw a punch. We will be looking at combos, straight,” he said. “If you feint, Bedak covers up.”

The elder Donaire sees the fight ending in the later rounds should Bedak opt to hold and run, but said the technical former Olympian is perfect for his son.

“I like a fighter who throws a lot of punches, because that’s when you can see an opening,” said Donaire Sr.

However, the challenger said he won’t be running come fight night.

Bedak has won his last 10 fights since losing to Coliseo Rodriguez in their WBO super bantamweight title bout.

Meanwhile, ALA Promotions president Michael Aldeguer expects a crowd of 30,000 for tomorrow’s bout, eclipsing the 24,000 who saw Z Gorres’ fight against Fernando Montiel.

Aldeguer is hoping for an exciting night in boxing to burnish Cebu’s unofficial status as the boxing mecca of the Philippines.

Meanwhile, Mark Magsayo (13-0, 10KOs) and Chris the Hitman Avalos (26-4, 19 KOs) also made the weight easily for their clash for the vacant WBO international featherweight title.

The two, who had some heated exchanged during the press conference, also got into an intense staredown with Magsayo, slashing his throat. Avalos, whose camp described the match as a fight between a man and a kid, merely smiled. Both fighters weighed 125 pounds.

Undefeated Paul Fleming (21-0, 14KOs) also hit 129 pounds, while Miguel Angele Gonzalez (22-7-1, 12KOs) was on the dot at 130 pounds. They will fight for the WBC Continental Americas super featherweight title.

FWD shakes up Visayas, brings “Live to Move” to Cebu

A 30-minute run to kick start the day. Biking to and from work. Yoga classes thrice a week after work. A trek to the mountains…

This is the roundup of stories that came out in local publications today, April 22, 2016. Fight day traffic The Cebu City Transportation Office is…