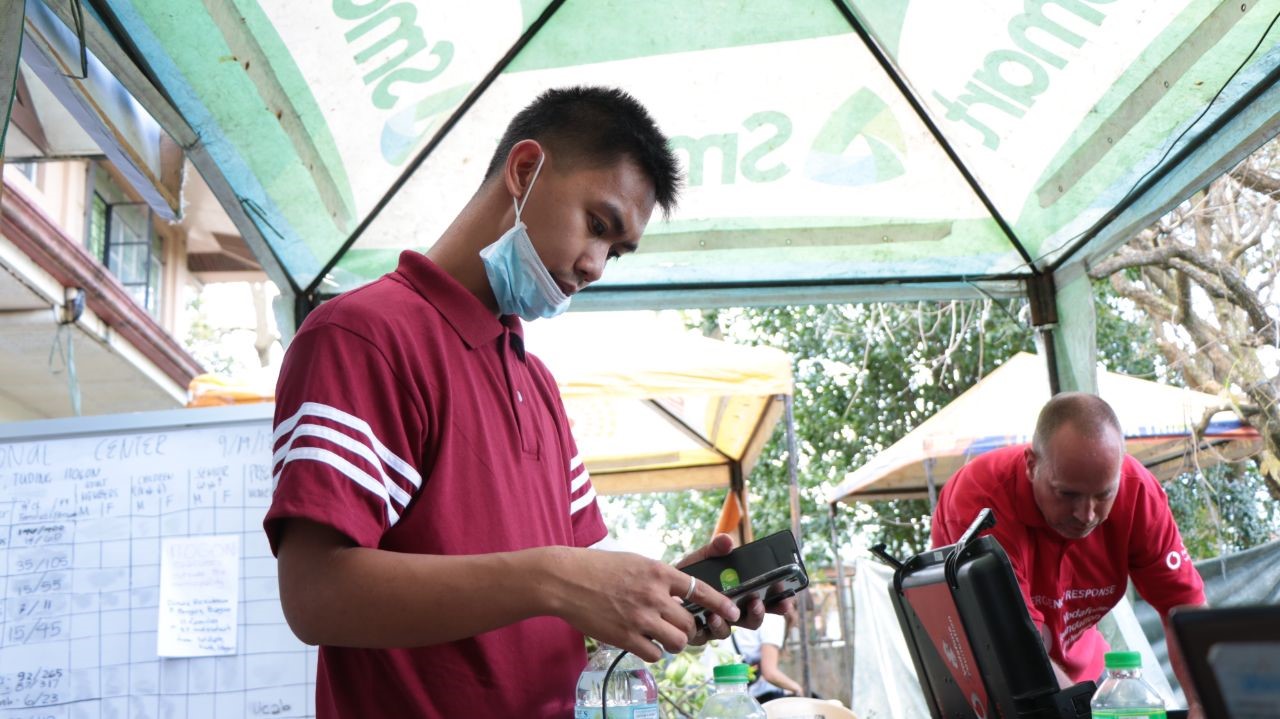 Communication services, technological innovations and partnerships with various organizations—these factors have helped communities all over the Philippines bolster disaster preparedness and response efforts.

As the Philippines faced typhoons, volcanic eruptions and other hazards in 2018, several communities weathered the storm with the help of solutions initiated by PLDT wireless unit Smart Communications.

As part of its #SafePH advocacy, Smart ensured the availability and quick restoration of its services in areas hit by calamities. These areas include Albay, which was affected by the eruption of the Mayon Volcano; Benguet and other provinces in the Northern Luzon, which bore the brunt of Typhoon “Ompong” (Mangkhut) and “Rosita” (Yutu); and other areas all over the country that experienced heavy rains, strong winds and floods.

A resident from Benguet (left) uses the free charging station put up by Smart and Vodafone Foundation at the Typhoon Ompong command center in Itogon.

In areas where communication services were limited because of damage to infrastructure and power lines, Smart offered libreng tawag (free calls), charging and Wi-Fi services to both affected residents and responders.

When Ompong hit Northern Luzon and triggered a deadly landslide in Benguet, Vodafone Foundation teamed up with Smart to provide emergency solutions for those affected by the typhoon. Smart and Vodafone set up free charging and Wi-Fi stations at the command center and the retrieval site in Itogon for the use of both responders, evacuees and family members of landslide victims and others in need of assistance.

Nokia also tapped Smart to be its connectivity partner for a program that employs drones and network solutions for disaster response. The Nokia Saving Lives program seeks to provide communications technology and technical assistance to emergency response teams. In the Philippines, Smart will provide high-speed connectivity to the drone system to help boost the disaster response efforts of the Philippine Red Cross.

Vodafone volunteers (in red) get help from Itogon residents as they set up the free charging and Wi-Fi stations for responders and affected residents near the area hit by landslide in Barangay Ucab.

Since 2016, the TNT Tropang Ready program has covered more than 10,000 students and school personnel in more than 10 state colleges and universities nationwide. Joining the roster of Tropang Ready schools this year are the following universities: Holy Name University in Tagbilaran, Bohol; University of Southeastern Philippines in Davao City; Mariano Marcos State University in Ilocos Norte, and Mindanao State University in Marawi City. The students were trained to cascade their learnings to their extension communities, bringing the lessons to more residents and amplifying its benefits.

A resident of Naga, Cebu, uses Smart’s free calls service to contact a relative following the landslide that hit their community.

Smart also extended support during nationwide earthquake drills by providing various emergency communications facilities, allowing residents and responders to experience first-hand the solutions that are available to them as the need arises. The drills were held in San Mateo, Rizal; Davao City; and in various locations all over Metro Manila.

As Filipinos gear up for 2019, Smart also recognizes the importance of being prepared for the year ahead. Smart continues to ensure the reliability of its services and, in times of distress, offer communications as relief, as part of its commitment to a #SafePH. (Press Release)

Relive the music of the 90s and listen to such Pinoy icons as Jett Pangan of The Dawn, Paco Arespacochagga of The Introvoys, Glenn Jacinto…

DiaGold, synonymous with elegant and timeless jewelry, marks a decade of brilliance. Through the years, the premier jewelry brand for engagement and wedding rings, and…