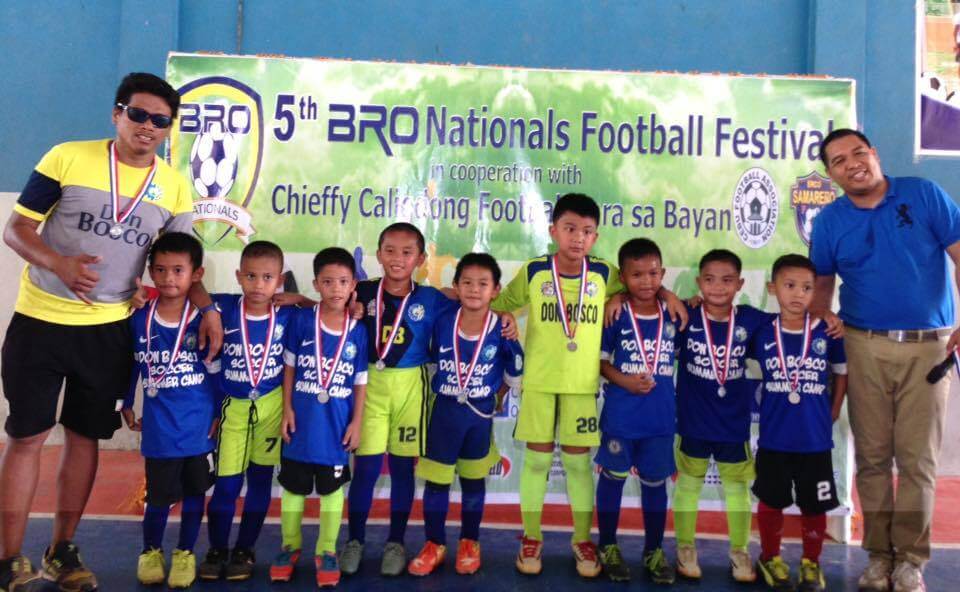 FIRST MEDALIST. DBTC’s Players 7 team was the school’s first medalist of the tournament, finishing second in their division.

A REVAMPED football program of Don Bosco Technological Centers seems to have started on the right foot after winning six titles in the 5th BRO Cup, its first tournament since making some changes in their football program.

Don Bosco named high school head coach Glenn Ramos the head of the football program for this year and he is now tasked to oversee training and identify which coach will handle which category.

“This year, before the summer clinic started, we also had a three-day refresher course for the coaches,” said Engr. Keith Buyco, one of the backers of the DBTC football.

I GOT THIS. A DBTC player intercepts a pass against Consolacion in the P12 division.

The first tournament after the 12-day clinic, which was followed by a football camp, was the 5th BRO Cup–named after Buyco, Ramos and Engr. Rodney Orale, and the DBTC acquitted themselves well with six titles and six runner-up finishes in the three-day event which attracted over 100 teams, including those from Dipolog and Bohol.

In the Players 11 division, DBTC A collected the title after earning six points, while DBTC also blanked Dipolog, 2-0, to win the Boys 13 division.

On the other hand, DBTC A also finished second in the Players 7 and Boys 15 division in the first day.

In the second day, DBTC added three more crowns in the Under 8, Under 12 and Boys 16 divisions.

DBTC A routed Dipolog, 4-1, to win the Players 8 title with Gabriel Zapanta and Aldous Tabar scoring, while DBTC added the 12-Under crown with a tough 1-0 win over Suba Basbas.

DBTC added its final title in the Boys 16 division with a 1-0 win over SURE FC.

Aside from the hosts, St. Theresa’s College also won two crowns in the two divisions it joined—the Girls 15 and 18 divisions.

STC blanked Phoenix Warshockz, 2-0, in the Girls 15 and San Roque, 2-1, in the Girls 18 division, thanks to an own goal and a goal by Amber Villaflor.

In the first day, Giuseppe won the youngest division of the tournament with a 1-0 win over DBTC, thanks to a brilliant goal by by John Colina, who hit the top bar from an acute angle with his left foot after a lovely turn and shoot. Aside from Tabar, the other members are Lawrence Gedorio, James Mañapac, Stacy Soria, Icho Kuroda, David Smith, Timothy Smith, Caliv Cavan, Hjanry Nino and Jasper Colina, Nini Jose and Roman Yosef Tiongko.

In the older divisions, Erco A defeated Erco B, 3-2, to win the Ladies Open, while Shooting Star won the men’s open over Aegis FC, 3-1. The Cebu Amateur Football Club also won the 45-above, 3-1, over DBTC, while Don Bosco Alumni won the 38-above crown.

This is the roundup of stories that came out in local publications today, May 6, 2016. Iglesia Ni Cristo chooses Osmeña over Rama The influental…

This is the roundup of stories that came out in local publications today, May 4, 2016.   USC grads make top 10 in Bar Exams…