Cordova’s bakasi and other bounties from the sea 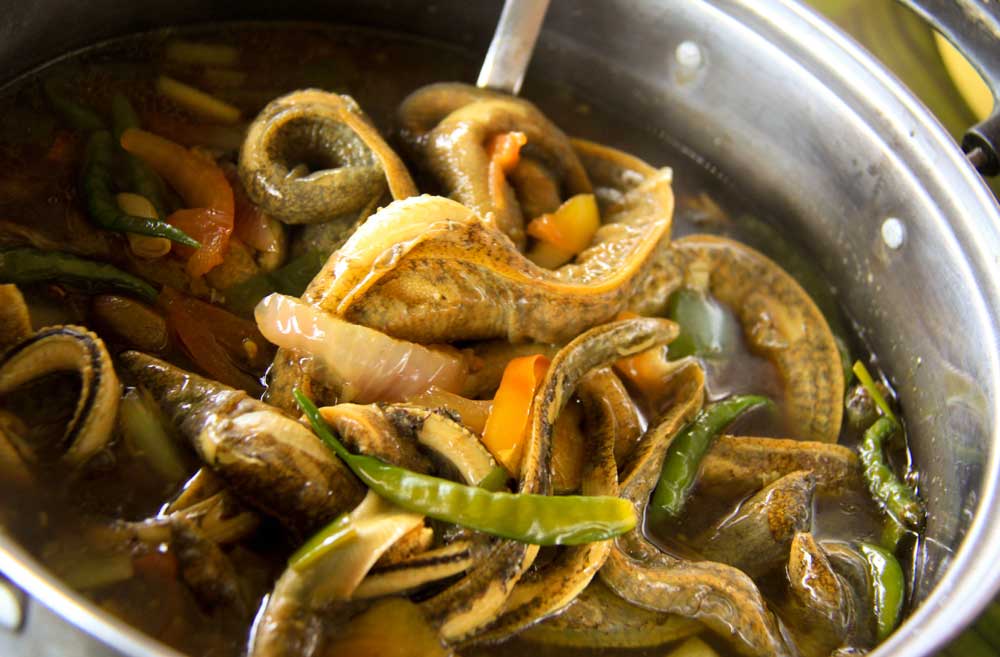 Text and Photos by Boboi Costas

The bakasi (saltwater eel) thrives abundantly in the town of Cordova, Mactan Island, a 45-minute drive from the city of Cebu. In taxonomic classification, eels belong to the Muranidae family which includes 200 species in 15 genera.

In Buwagsong, Cordova, a local fishing community; the bakasi is a prized catch. Because Cordova’s tidal flats are mostly muddy and grassy, the bakasi is caught in abundance. It has become a common but famous fixture in its local cuisine.

The most famous restaurant serving bakasi is Entoy’s Bakasihan. Entoy has been serving bakasi for over three decades now. He says it was his friends who liked his cooking and who advised him to open a restaurant. The rest is history.

He serves linarang nga bakasi which is eel sautéed and then stewed in soy sauce, black beans and sambag (tamarind). The dish is the equivalent of the Asian tom yum. It enjoys a huge following, mostly from men who think (and feel) that eels are a potent aphrodisiac. (The time I was there, the diners were mostly men: taxi drivers, salesmen, Korean and Vietnamese tourists. And it was Valentines Day!)

There is also the piniritong bakasi (fried eel). The eels are deep fried to make it crunchy and appealing to picky eaters. It is dipped in vinegar and soy sauce with lots of chili. There is a slight bitter aftertaste when you eat a fried eel because the eel remains ungutted. (It is a time-consuming process because a bakasi is only about 8-12 inches long, and the bile is supposed to have medicinal properties.) If you are a first-time eater, try the small ones first then gradually increase the size as you go.

And how are eels caught? Fishermen use a bantak, an eel trap fashioned from woven bamboo that looks like a small vase with a neck. Because eels by nature like to inhabit muddy flats with crevices, the bantak is just the perfect device. The opening allows the eel to crawl inside and since it doesn’t open from the inside, the eel is trapped.

It is alfresco dining at Buwagsong. You can order the bakasi from Entoy’s and bring it to the cottage set up by the barangay council. The view is remarkable, affording you to see Cordova’s local color unfold.

Summer, the season for travel, is here. Where do you plan to hie off to? If Singapore is on top of your list, check out…