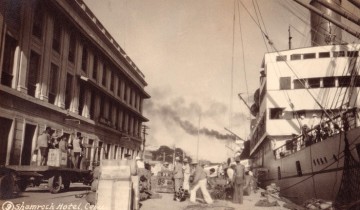 We know this building today to be Compañia Maritima, but in the 1930s it operated as the Shamrock Hotel.

Built in 1910, this structure named the Fernandez Building had Shamrock at its sole occupant during the 1930s, said Lucy Urgello Miller in her book “Glimpses of Old Cebu: Images of the Colonial Era.”

AT WATER’S EDGE. This building was known as the Shamrock Hotel in the 1930s and was built on reclaimed land at water’s edge. (Lucy Urgello Miller collection, used with permission)

Compañia Maritima got to occupy the building built on reclaimed land after Shamrock, which at one time printed postcards of the structure as a means of advertising, added Miller.

Miller said it was not clear who the occupants of the building, located right here on Quezon Boulevard – between P. Burgos and Lapu-Lapu Streets, were before Shamrock.

The Cebu Waterfront Heritage and Urban Conservation Study done in 2000, however, said Shamrock shared it with the Manila Steamship Company, which had offices in the building’s ground floor while the hotel utilized the upper floors. This could have happened before the 1930s, though, since Miller pointed out in her book that Shamrock was its only occupant during this period.

POSTCARD. Shamrock Hotel printed postcards like this as a means of advertising. (Lucy Urgello Miller collection)

According to the study, the building was owned by Fernandez Hermanos Inc. and was abandoned after it was bombed down during World War II.

It described the building as “3 storeys tall with arched windows…ornamental beams…sculptured railings on its roof decks.”

The building contributes significantly to the understanding the development of maritime, trade and shipping activities at the turn of the 20th century,” the study cited, adding it was among the first structures built on the reclaimed port area.

Cebu City Mayor Michael Rama, in an interview in November 2012, said he plans to restore this building and put up mosaic of historical areas in Cebu on its windows.

Compañía Maritima or Shamrock Hotel today. The shell of the building still stands today as a beautiful, silent sentinel at the South Road Properties.

The Filinvest Group of the Gotianun family from Cebu will beef up its mall portfolio this year. Festival Supermalls Inc., the wholly owned subsidiary of…

POWER went out in several areas in Cebu early this morning and have just started coming back as of this posting. A graduate of the…