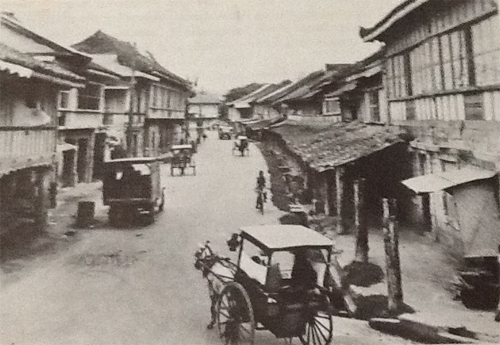 COLON STREET. This thoroughfare in downtown Cebu City is the oldest street in the Philippines. The undated photo of the old Colon Street above was taken from the book City Of Cebu, which was published by the Cebu City Government in 1970.

It may look like any ordinary street but this crowded stretch overflowing with shops, stalls, sidewalk vendors, people, and passenger jeepneys is, believe it or not, the oldest in the Philippines.

This thoroughfare in downtown Cebu City known as Colon Street existed way back in time, since Spanish conquistador Miguel Lopez de Legazpi commissioned its creation in 1565 as part of a settlement called “Villa de San Miguel (St. Michael’s Town)” that also had Fort San Pedro as its nucleus.

It was named after Italian explorer Christopher Columbus, who sailed for the king and queen of Spain and whose name translates in Spanish to Cristobal Colon.

Today, no trace remains of Legazpi’s Colon or as it was during the 19th century, with its rows of two-storey houses facing one another on both sides of the street. The residential homes of olden times featured a store, shop, or office on the ground floor and living quarters upstairs and belonged to the forebears of prominent names in Cebuano society like Briones, Gantuangco, Lu Do, Rallos, Osmeña, Singson, Cuenco, and Martinez, among others.

Markers containing short information on Colon of old, like this one about the Vaño Residence, are placed on both sides of the street.

Colon Street connects to the old Chinese district of Parian, where wealthy Chinese-Filipino merchants used to live and do their trade in the 1950’s. The name Parian reportedly comes from “paripari,” which means “to sell or barter.”

Before the 90’s, when malls sprung up in other areas of the city, Colon was the center of economic activities in Cebu. Before SM and Ayala, Cebuanos flock to commercial establishments in Colon like Plaza Fair, Gazini Plaza, Rosita’s, and Gaw Trading, Inc.

The street has developed a bad reputation through the years as a lair of pickpockets and snatchers. If you do decide to check out this historic street in Cebu, go with a group. Don’t wear jewelry or bring valuables with you.

An obelisk detailing Colon’s historical significance stands at its northern end, and on either side of the street are markers on lampposts that contain information about the establishments or houses that used to be in the area.

If you’re in Cebu City, getting to Colon is easy. Almost all jeepneys that ply different city routes end up in or close to Colon Street. By taxi, Colon Street is 15-20 minutes away from SM or Ayala.

This small octagonal structure in downtown Cebu City may appear unimpressive, but it houses a valuable relic and marks an important spot for Cebuanos. Enclosed…

Cement, iron, and steel come together to form the towering Heritage of Cebu Monument built right on the original Plaza Parian in Cebu City. Conceptualized…