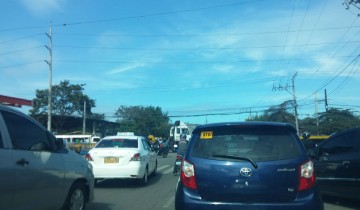 Considering the heat, less traffic in the evenings and with most people at home after work, Mandaue City is planning of having garbage collectors do their daily rounds at night.

Instead of relaxing, at least 138 families or 570 individuals in Sitio Mansanitas, Barangay Cogon Pardo, Cebu City found themselves sifting through the rubble after a fire hit their part of the neighborhood.

Due to the inaccessibility of the area, fire fighters were not able to immediately stop the flames from spreading. They received the call for help at 12:05 p.m. and, with the area being closely packed, raised it to a third alarm right away. Connecting at least 15 hoses to reach the site, the fire fighters took 30 minutes to get the flames under control.

According to Cogon Pardo Barangay Captain Harry Eran, a reblocking plan that was planned before may now be implemented to prevent the same incident from happening again.

No heat, less traffic at night

Citing the heat that can make a worker unproductive and less traffic in the evenings, Mandaue City Mayor Jonas Cortes is thinking of having garbage collectors do their daily rounds at night.

He also pointed out that more garbage can be collected at night with most people at home who can attend to their household wastes when the collectors arrive.

He is finalizing the plan with the Department of General Services and the Solid Waste Management Office.

This is part of the process of implementing new programs to better manage waste. Mandaue City collects an average of 460 tons a day.

The City also plans to put up exchange centers where one can get grocery goods in exchange for trash that can be recycled. Barangay Subangdaku is chosen as a pilot area for this project. An initial budget of P500,000 has been allocated.

Mandaue City plans to do its garbage collection at night to escape the daytime heat and traffic.

Typhoon Chedeng is expected to make landfall in Central and Southern Luzon on Black Saturday. Cebu may experience a rainy weekend. National Bureau of Investigation…