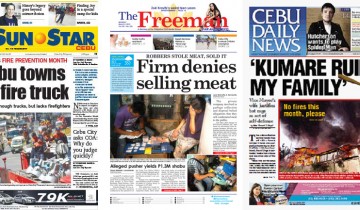 Around P1.3 million worth of illegal substance was confiscated from a mother of three, an alleged big-time drug pusher, at Sitio Buli, Barangay Duljo-Fatima, Cebu City, early morning yesterday.

According to the Commission on Audit (COA), the Cebu City Government has procured P61.2 million worth of asphalt materials allegedly in violation of existing laws.

To prevent trouble from breaking out, Talisay City Mayor Johnny V. de los Reyes wants a time limit in all disco activities in the city.

In a buy-bust operation, the Cebu City Police captured Emelyn Dingal, 49, in Barangay Duljo-Fatima, after being caught with packs of illegal substance that weighed 110 grams and would have fetched P1.298 million.

Dingal was described as a level-one drug pusher who can sell about a kilo of shabu per week.

She was cornered after handing a pack of suspected shabu to a police decoy in exchange for P2,000. Later, the police confiscated from inside her house three large packs, three medium packs and 30 small packs of suspected shabu as well as a weighing scale and P23,000 of suspect drug money.

“Tungod sa kalisod kapit na lang ta sa patalim (The times are hard. I had to do what I could to survive).” — Emelyn Dingal

COA: City did not use its asphalt batching plant

COA said the P61.2 million for Cebu City Government’s procurement of asphalt materials could not be properly validated since the transaction lacks pertinent documents, program of work, plans, inspection reports and inventory of roads/city streets where the paving and retreading took place.

In an audit report, it stated that the Cebu City Government did not use its own asphalt batching plant but instead “procured its bituminous asphalt from private entities, thus defeating the purpose of maintaining the plant and incurring unnecessary maintenance and manpower cost while being utilized.”

State auditors said the procurement of construction materials for paving and retreading of various city streets could not be validated due to absence of documents, thereby casting doubt as to the validity of the deliveries.

Cebu City Mayor Michael Rama pointed out that there was no proper audit query conducted to determine the exact status of the facility.

“With all due respect, the said COA audit observation is lacking in diligence and somewhat shows the propensity of COA to be judgmental rather than to be inquisitive first. It tends to show a seeming lack of appreciation to local government mandates and service exigencies.” — Cebu City Mayor Michael Rama

The plan for a time limit in all neighborhood dances in Talisay City came after a number of incidents involving drunk persons were reported in the police station during the weekend because of the fiesta celebration in Barangay Lagtang.

One incident involved a partygoer who was shot in Barangay Lagtang while attending the disco at 4 a.m. yesterday.

The Freeman: Developer targets to start Lapu-Lapu project by Q3