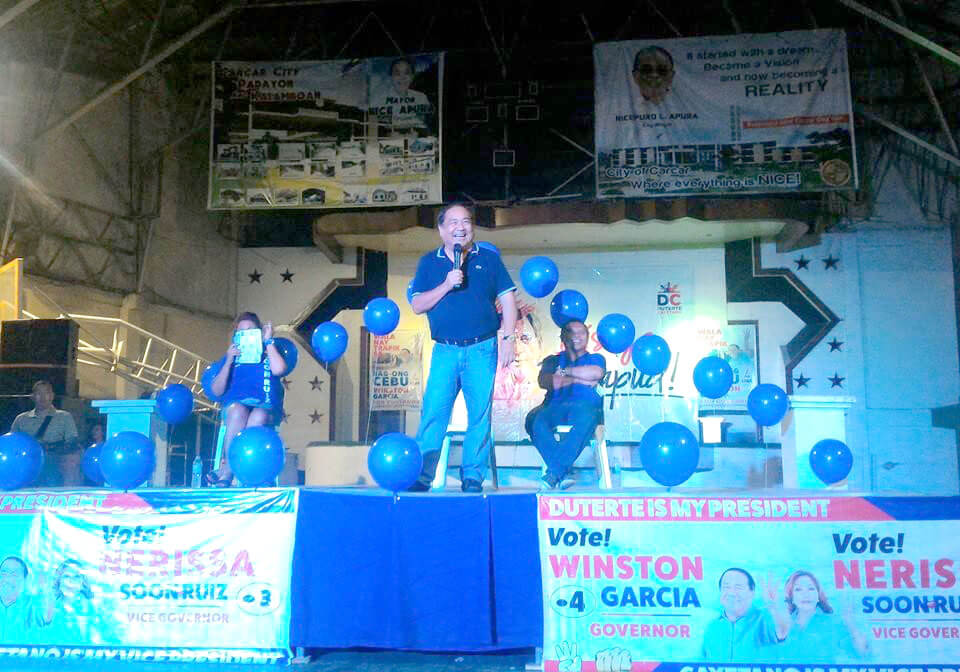 Going around Cebu province these days, tourists and non-tourists are faced with one basic problem: the absence of clean toilets.

That is something One Cebu gubernatorial candidate Winston Garcia wants to address if he is elected into office. Garcia, during a roundtable discussion with some newspaper workers, said he wants to build clean toilets throughout the province, his campaign said in a press statement.

“I will mandate that. Our toilets are dirty wherever you go. Finding clean toilets is a big problem. People don’t mind paying as long as it is clean,” Garcia said.

Winston Garcia, One Cebu’s candidate for Cebu governor, talks about his plans during a campaign outing. (Photo from Garcia’s FB page)

True enough, the stench of dirty toilets greeted tourists at the recent Suroy-Suroy tourism escapade in the Camotes group of islands, Garcia’s media group said in a statement. Provincial Tourism Officer Grace Paulino was quoted in a newsreport as admitting that this has always been a problem. The Suroy-Suroy Camotes tour was held last April 22 to 24 and was participated in by paying foreign and local tourists.

“It is unforgivable that toilets in Cebu province are dirty,” said Garcia.

He said the Province can pay for the initial cost of the project.

“Maybe we could start with the gas stations,” he said.

Garcia said he will even have a list of clean toilets in the province included in a mobile phone application to guide visitors. Garcia also shared his plans for Cebu’s tourism, such as having airports in the tourism areas of Moalboal, Camotes and Bantayan, as well as building a Cordova tourism zone that will include a 500-hectare reclamation area with a long stretch of white sand beaches facing the Hilutungan Channel. (Press Release)

This is the roundup of stories that came out in local publications today, April 26, 2016. Comelec ban hampers Capitol aid for El Nino THOSE…