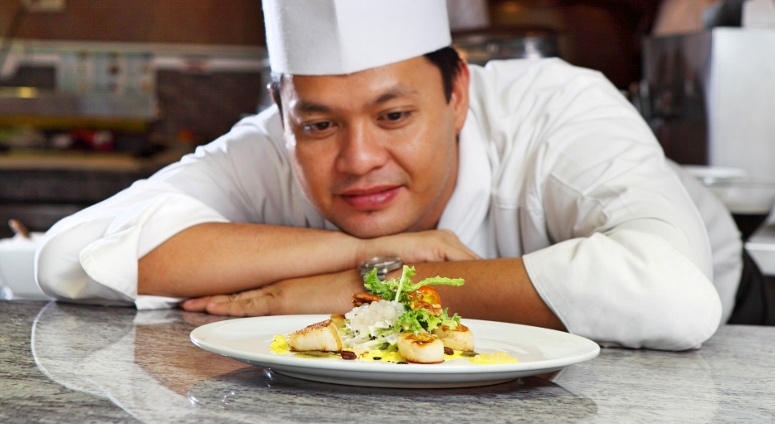 A chef who rose from the ranks now takes charge of the highly-regarded Marco Polo Plaza Cebu kitchen.

The hotel, which takes pride in being known as a leader in culinary excellence in Cebu, recently named Chef Juanito Abangan as its first Filipino executive chef. The promotion marks a major milestone for someone who discovered his love for cooking at a very young age.

Chef Juanito started with the Marco Polo Plaza Cebu kitchen in 2007 as Chef De Partie at the Pool Bar.

He later explored opportunities outside the hotel but came back in 2008 to serve as Junior Sous Chef during the opening of Blu Bar & Grill.

He imbued his cooking with the passion for great food that saw him rising from the ranks, getting promoted to Sous Chef, Senior Sous Chef, Executive Sous Chef, and finally, the hotel’s first Filipino Executive Chef.

Chef Juanito discovered his love for cooking at a very young age. He began his culinary career in fine dining restaurants as a commis. His work ethic and culinary excellence paved the way for a career in 5-star resorts and hotels.

“Through the years, I have learned the value of teamwork, passion and continuous improvement from my past mentors” he said. Chef Juanito said his learnings from previous executive chefs and general managers he worked with in the industry contributed greatly to the success he now enjoys.

Chef Juanito believes that effective communication is key when running the kitchen. He sees being a Cebuano as something that he can use to his advantage in working and communicating with his all-Filipino team of chefs. With hard work, passion and team effort, he believes that he can lead his Marco Polo team into achieving great success by continually creating wonderful dining experiences for hotel guests.

As Executive Chef, Chef Juanito oversees the hotel’s four dining venues, including the hotel’s signature restaurant – Café Marco, as well as Blu Bar & Grill, El Viento Restaurant & Pool Bar and Lobby Lounge. On top of it, he also oversees the hotel’s in-room dining and banquets and catering events ranging in size from small meetings to grandiose weddings and conventions.

4 teams from Cebu in finals of Smart’s innovation competition

Four student teams from Cebu are in the running for the country’s biggest technology competition, the SWEEP (Smart Wireless Engineering Education Program) Innovation and Excellence…

Our phones have become an integral part of our toolbox to freeze and create our most memorable and cherished memories. They have become our go-to…