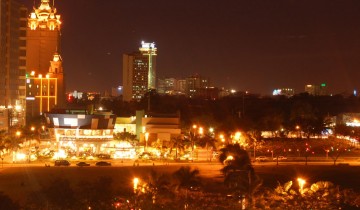 In 2019, the public will see the rise of two BPO towers, a mall and a hotel inside the 24-hectare Cebu IT Park in Lahug.

A fire went up in a reforestation project in Barangay Canangcaan, Oslob town at 2 p.m. last Sunday and spread to cover 120 hectares.

Central Visayas is asking for P108.86 billion in projects in the national budget for 2016.

More development in IT Park

Property developer Ayala Land Inc. will invest around P8 billion for a 2.2-hectare mixed-use project inside its own development, the Cebu IT Park in Lahug, Cebu City.

A night shot of the Cebu IT Park, where property developer Ayala Land, Inc. plans to put up a Central Bloc of 2 BPO towers, five-level Ayala mall, and Seda Hotel. (Creative Commons photo by George Parilla)

The project is called the Central Bloc. It will house two business process outsourcing (BPO) towers, a five-level Ayala mall, and a 214-room Seda hotel.

The new project, which broke ground on Friday, is expected to generate 17,000 jobs upon completion in 2019. About 14,000 of these jobs are expected to come from the BPO sector.

The BPO towers will accommodate local and multinational firms that wish to expand their operations in Cebu while the mall is expected to house a total of 500 local and international brands and offer a gross leasable area of 24,000 square meters.

The management said they will add two more access roads to Banilad to support the road requirements of Ayala’s existing and future projects in the Cebu IT Park.

No response to the fire?

The fire department in Oslob admitted they were not able to respond to the forest fire in Barangay Canangcaan because no one told them about it.

Authorities are now verifying reports that a 14-year-old boy may have caused the fire, which broke out in steep terrain. Residents in the area failed to stop the forest fire because of the steep terrain and their lack of water sources.

The fire destroyed around 60,000 trees of varying species, such as kakawati, robles, ipil-ipil and molave, and worth Php 285,000, according to Department of Environment and Natural Resources (DENR) 7.

It was one of the critical plantations under DENR’s National Greening Program (NGP). The nine critical NGP plantations in Central Visayas are in Oslob and Argao in Cebu; Ubay, Buenavista, Getafe, Pilar and Talibon in Bohol; and Ayungon and Bindoy in Negros Oriental.

DENR 7 director Dr. Isabelo Montejo ordered the immediate monitoring of all 20 NGP plantations in the region and setting up of community fire brigades to counter the effects of the El Niño phenomenon.

With the endorsement of the Regional Development Council (RDC) 7, Central Visayas is asking for P108.86 billion in programs and projects, including roads, in the national budget for 2016.

Cebu has the biggest budget for social development at P38.285 billion and infrastructure, at P21.858 billion.

However, the total amount does not include yet Cebu City’s infrastructure projects because these lacked an endorsement from the Cebu City Development Council.

On the fringes of Cebu City’s urban landscape are wooded trails that lead to rustic hangouts. People unfamiliar with the city might find it hard to believe that a few minutes away from the high tech enclave of BPO companies and big shopping malls are rivers, waterfalls, and other scenic spots.

The National Bureau of Investigation (NBI) 7 seized in a raid about P10 million worth of used clothing in Barangay Paknaan, Mandaue City yesterday. The…