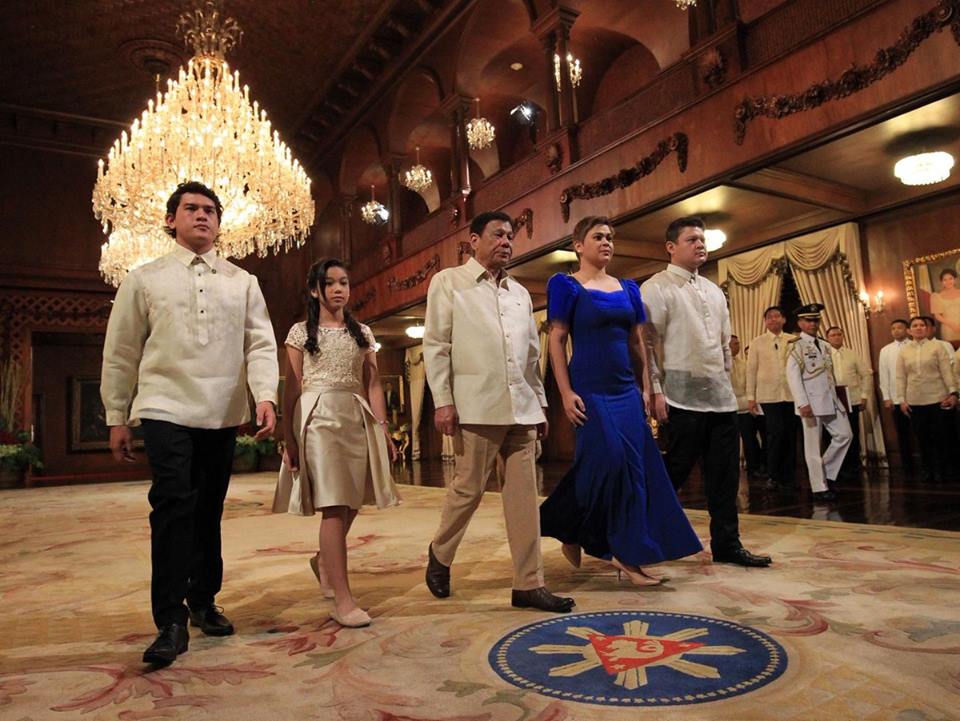 SUPPORT FOR HOUSE DUTERTE. President Rodrigo Duterte (center) with his sons and daughters during his first day in Malacanang. (Malacanang photo)

Let’s all dance to the tune of change.

Local leaders, and even the local chapters of militant groups, are echoing President Rodrigo Duterte’s call for change during his inauguration yesterday in Malacanang. Bayan-Central Visayas chairman Jaime Paglinawan said a coalition of farmers, workers, students, women, drivers and other sectors, have drafted a 15-point people’s agenda, which their counterparts in Manila presented to Duterte yesterday.

“That (reducing red tape) is precisely what I wish the president will work on. It is Congress that passes all of these laws that is very hard to work with. So now, it is a mess. We’re going to change things. We don’t care if they have clearances. Just pay your taxes.” — Cebu City Mayor Tomas Osmena.

Tomas to cut City Hall’s politicized payroll; cites ambulances having 20 personnel each as example of waste of funds

Cebu City Mayor Tomas Osmena warned employees that he will not be afraid to boot out employees caught for corruption, even if they are his appointees. Osmena said he has suspended almost 400 employees since his first year as mayor who were caught for corrupt practices. He also cited the Cebu City Medical Center as one of the most-corrupt department in City Hall, citing the numerous instances of medical supplies getting stolen.

I have the intention to bring down our payroll. It’s very bloated. Its so politicized and I don’t know what they are doing. For instance, every ambulance has 20 personnel. They can’t even fit inside the ambulance. — Mayor Tomas Osmena.

Former Cebu City mayor Mike Rama said he and his family has been hurt by accusations that he is into drugs and coddled drug lords and is asking his allies to sue the accusers for libel. During a speech in the oath-taking of Team Rama councilors, the former mayor asked his allies–especially the lawyers–to check those who accused him of being into illegal drugs.

My family has been hurt, wounded and my relatives in America has been teeling me why I am not making an issue about it. Wala gyud ko magtuo jasta akong mga paryente, wala magtuo nga mamahimo kong addict after 24 years of serving the public. Former Cebu City mayor Mike Rama.

» Sun.Star Cebu: Davide promises to be transparent in new term

» The Freeman: Courts suspend hearings in July for records disposal

» The Freeman: Davide out at detractors in oath-taking speech

» The Freeman: Pagara brothers hope to score twin victories in US card

» Orlando Carvajal: Jaguar’s generosity may have been for self-interest

» Bong Wenceslao: Robredo in for a challenging time as VP

» Cheking Seares: Duterte pulls surprise with vow to adhere to due process

More local and foreign destinations will go on sale this year at the 3rd International Travel Festival (ITF) that’s happening from July 15-17, 2016 at…

Mandaue to use traffic cameras to catch violators