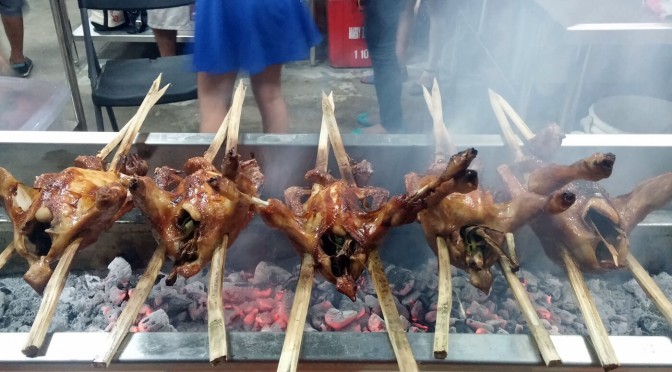 Angelo G. Carandang, store manager, said they wanted to add to the assortment of services they are currently offering SM Hypermarket customers.

Conching’s specialty, which is the roasted native chicken, sells for P280.

“We already offer grocery and fresh produce as well as appliances. Our aim is to further provide convenience to shoppers by allowing them to shop and eat in their favorite restaurants without having to worry about parking,” he added.

SM Hypermarket Cebu has put up al fresco dining spaces, 36 square meters for each restaurant, along the store’s anterior area. The restaurants can accommodate 32 people and a common dining area can seat about the same number.

Conching’s Native Chicken, which started as a small ihaw-ihaw stall in Taboan way back in 1968, is a popular food destination of locals, tourists, and even celebrities.

The restaurant’s signature dish is the native chicken, which can be roasted or prepared as tinola or stew.

Conching’s at SM Hypermarket features al fresco dining. It can seat a maximum of 32 people.

Conching’s main restaurant is near the Honda Cars Cebu Showroom along A. Soriano Avenue in Cebu City.

Well known for its seafood menu, the A-One Tinola ug Sinugba started out as a roadside eatery selling grilled items at Pier Tres in 1984. Early customers referred to it as A-One because it was located in front of a lumber store carrying this name. The name has since stuck.

A-One is known for its seafood menu, including fish soup or tinola and grilled fish.

When it comes to flavorful fish tinola and grilled seafood, locals think of A-One. It sells fresh catch from the sea and grills it to perfection. People come to A-One for its bestsellers, which include freshly grilled tuna, squid, blue marlin as well as hot fish soup locally known as tinola.

Esmeralda Paca, one of the daughters of the couple who started the small streetside barbecue stall, said her father was a fisherman and her mother a fish vendor. The inspiration for the eatery came from their livelihood means, she added.
Paca said she and her other siblings worked to grow A-One into what it is now. Early this January, they plan to open an A-One branch in Tubigon, Bohol. Aside from Zamboanga, Bohol is also A-One’s supplier of fresh seafood.

Cebu Lechon Belly started with an idea that revolutionalized the roasted pig industry. The company calls its innovation “super lechon” because it gives people what they want in a roasted pig: the belly part which is tender and boneless at the same time.

Cebu Lechon Belly came up in 2012 with roasted pork that is boneless and using only the best part of the pig.

Marlon Gochan, owner, said all the flavor goes to the belly because it is where roasters put all the spices including lemongrass. Every inch of Cebu Lechon Belly is guaranteed to be as good as all the other bites.

“I admit we had a hard time at first because we’re in Cebu, the place famous for lechon. It’s hard to compete with the favorites but what we have introduced is something that people also want,” he pointed out. Cebu Lechon Belly now has 30 branches nationwide and they’re the first Cebu-based lechon business to ever reach Manila.

The Cebu Lechon Belly branch in SM Hypermarket Cebu is one of 30 operating nationwide.

These three restaurants in Cebu now operate at SM Hypermarket Cebu, making it easier for their customers to satisfy their craving for their popular dishes. Carandang said SM Hypermarket is not just groceries, clothes, and home essentials anymore, it is also now a place where people can taste Cebu native food specialties.

Azia Suites and Residences opened just last July and is located near Gen. Maxilom Avenue (formerly Mango Avenue), along the route of the Sinulog 2015 dancing contingents.