Sto. Nino pilgrims find a place to stay in Cebu 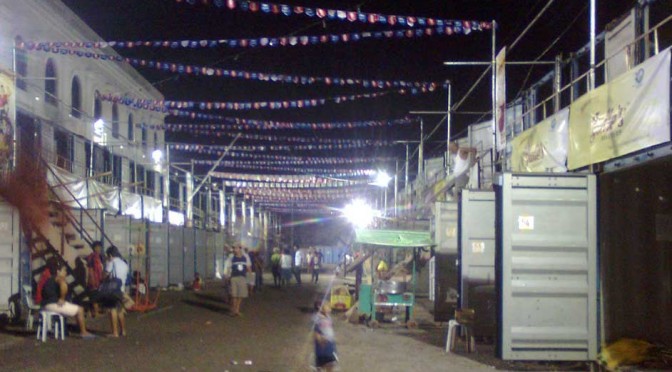 Cebu’s Fiesta Senyor or feast of the Sto. Nino draws devotees from all over, and thousands converge every January in Cebu City to fulfill a “panaad” (devotion).

There are pilgrims, however, who do not have relatives here and cannot afford to pay for rooms so the City Government puts up a “Devotee City” every Sinulog Festival to accommodate them.

“Sa una magkatag lang sila sa aseras. Delikado nya samok tan-awn (They used to sleep on the sidewalks. It was unsafe and unsightly),” said Cebu City Councilor Roberto A. Cabarrubias, in explaining why the City Government is setting aside a place for them to stay.

DEVOTEE CITY. The rows of container vans serve as temporary homes of Sto. Niño pilgrims who have nowhere else to stay in Cebu City. CLICK TO ENLARGE

The Devotee City in January 2012 will be at the open space near the ruins of the Compania Maritima building located at the city port that is accessible through Quezon Boulevard. It will have 110 container vans as living spaces, several portable toilets, and areas for showering, cooking, and washing dishes. It will run from January 13 to 15, 2012.

Cabarrubias said the vans will be cleaned and sanitized and the City Government also distributes cartons sourced from various establishments that devotees can put on the floor before their mats to keep the heat or cold out. A common complaint is that it is hot inside the vans during the day but the councilor pointed out that it is infinitely better than being out on the streets.

The 2011 Sinulog drew around 2,000 people and Cabarrubias said he expects this number to increase by around 10 percent in 2012.

A budget of P980,000 has been set aside for the running of the 2012 Devotee City; this funds the lease of the vans, food for the staff and security people assigned there, as well as other needs of the place.

Those staying at the Devotee City take care of their own provisions, though Cabarrubias said no one goes hungry because there is a constant flow of food from various sources: individuals, groups, businesses.

Devotees must show proof they are from out-of-town through bus, boat, or plane tickets so they can be accommodated, said Cabarrubias, explaining they can only accommodate residents of Danao City and farther from northern Cebu and Carcar and farther from southern Cebu. They also expect visitors from other islands in the Visayas as well as from Mindanao.

Security is one of the main considerations at the pilgrim area so to protect guests staying there, Cabarrubias said they are fencing the area and placing only one entry and exit point. Visitors will be provided ID cards and required to present these during entry. Policemen patrol the premises in pairs for three shifts within a 24-hour cycle and will be augmented by barangay tanods.

Since the Philippine Long Distance Telephone Co. (PLDT) provides free phone lines and Internet connection, Cabarrubias said he has placed a camera that streams a video feed of Devotee City activities on the City Government website.

The Department of Manpower Development and Placement (DMDP) creates a database of pilgrims who stay at the Devotee City and regularly updates this.

“Ato manang tan-awn ngano wala na kabalik. Mangutana pud ta sa kaila kung asa na ni sila,” he explained. (We also check why regular pilgrims were not able to come back. We ask about them from those who know them.)

Cebu’s Devotee City for Sto. Nino pilgrims has taken on a life of its own, and is now totally a part of every Sinulog Festival celebration like the procession and even the street dancing parade.

Devotees come here with only one thing in mind, fulfilling their devotion, yet they get a place to stay and food for the entire duration of the festival.

More than that, some get a chance to win food and goods to bring home when they leave through games and raffles especially held for them by Cebu City businesses.

Truly, said Cabarrubias, the Sto. Nino takes care of his own.

Sinulog is the grandest fiesta celebration in the Philippines. It has several religious and cultural events scheduled to start as early as December. The highlight…

1 Comment on Schedule of cultural, religious activities during Sinulog 2012 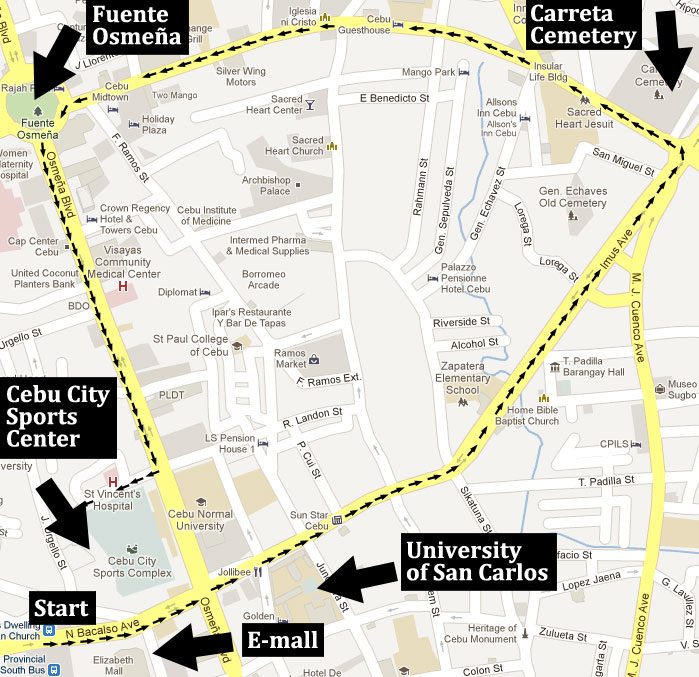 The Sinulog Carousel route for the grand parade has been unchanged for years. It starts on Natalio Bacalso Ave. near E-mall and then to the…