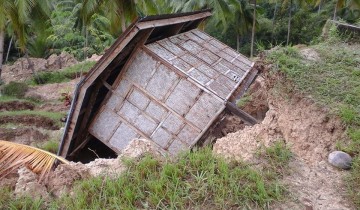 A town mayor has asked for Capitol’s help to build dikes to prevent flooding in low-lying areas. Other mayors of towns affected by Seniang also sought help in rehabilitation. The Cebu City Government, meanwhile, extended help not only to Cebu towns affected by the storm but to 2 cities in Samar.

Mayor asks Capitol: Give us dams

Davide met yesterday with mayors of towns in southern Cebu that were affected by tropical storm Seniang. When Seniang hit southern Cebu in the last days of 2014, 17 persons died, 14 of them in Ronda.

The mayors also sought the governor’s help in the rehabilitation of houses and dealing with sinkholes.

Davide said he will ask the Department of Public Works and Highways and the Cebu Provincial Engineering Office to study where they can build river dikes.

IN ARGAO. A sinkhole topples a hut after tropical storm Seniang hit the area. (Photo by Evelyn Llevado Remando)

Sun.Star Cebu also reported that as of yesterday, 148 houses were destroyed and 449 houses damaged by Seniang in Alcantara, Barili, Dumanjug, and Ronda.

The Cebu City Council yesterday approved P1.8 million as financial assistance to Dumanjug, Alcantara, Ronda, and Sibonga in Cebu, Catbalogan City in Samar and Borongan City in Eastern Samar. Each local government unit will get P300,000.

The financial assistance for Catbalogan and Boronggan will not be released yet since the resolution by the Cebu City Disaster Risk Reduction Management Council recommended only the P1.2 million in assistance to the four southern Cebu towns.

Councilor Alvin Dizon said that although he has no objections to helping the cities of Catbalogan and Borongan, there should be guidelines on when the City can send assistance to local government units outside Cebu.

“I’m surprised! Nakakatuwa naman the City of Cebu extended help to us. It’s really a big help and it shows that the city has a big and generous heart for areas affected by the typhoon.” — Catbalogan City Mayor Stephany Uy-Tan in an interview with The Freeman.

The question on what constitutes a two-thirds vote stopped the Cebu City Council from overriding yesterday the veto by Cebu City Mayor Michael Rama of an ordinance setting aside 10.6 hectares of the South Road Properties for a sports hub.

But Council presiding officer and Cebu City Vice Mayor Edgardo Labella said one more vote was needed to override the veto, citing a 2001 DILG legal opinion. Gabuya, however, disagreed and cited a 2007 legal opinion to back him up.

The council agreed seek the legal opinion of the DILG and pending that, suspend the implementation of the ordinance

SINULOG BEAT. The grandest festival in the country opens early in the morning today with a religious walk. Cebu City Mayor Michael Rama is prepared to transfer performances if bad weather hits the city on the day of the grand parade. (Photo by Lito Lapure used with permission from the Sinulog Foundation)

Sinulog activities open at 4 a.m. today with the Walk of Jesus.

If bad weather hits Cebu City during the grand parade on January 18, contingents will perform either in the City Hall block in the South Road Properties or in the Cebu Coliseum, organizers said.

“This will be if worse comes to worst. The judging for the contingents will have to be transferred.” — Cebu City Mayor Michael Rama

Rama said the venue should accommodate at least 5,000 people. The performance will be transferred only in the event that the city will be placed under Signal No. 1 by the weather bureau.

Also interesting… The Freeman editorial: Raising taxes to throw away needlessly is crazy

Business owners in Cebu are calling on local governments to streamline the annual renewal of business permits and licenses and cut down the red tape.

Filipino-Cebuano Business Club Inc. president Rey Calooy said procedures in getting and renewing permits should be standardized in all local governments.

“There is a high demand for organic food. There is money in natural farming (because the products) command a premium price. We need to maximize this opportunity.” — DA 7 Director Angel Enriquez

He said CBM will be a platform for local companies to network with local and global companies to grab opportunities when the AEC takes full affect by yearend. (Sun.Star Cebu story)

“I was hesitant to accept it. I knew that it would take up almost 100 percent of my time from the business. But I saw the sincerity and that she needed someone to help out.” — Francis Dy on being asked by CCCI president Ma. Teresa Chan to chair this year’s CBM.

Sinulog is both festive and religious. It is the biggest religious gathering in Cebu; it is also its biggest party – on the street, in…

1 Comment on Other side of Sinulog: Cebu turns into a big party zone; here’s where you should go

Since the devotion to her started in Africa, this church’s patron – the Patroness of the Rule of St. Augustine – has been depicted as…