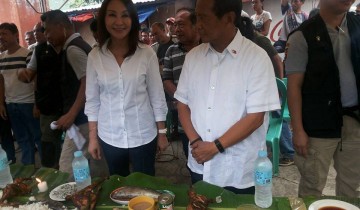 Vice President Jejomar Binay and the impact of the bridge damaged by Seniang dominate today’s news. With Sinulog fast approaching, stories on the festival are also becoming prominent including one about a “massive operation” against erring drivers as one way to deal with the traffic that comes with the event. Sinulog Foundation Executive Director Ricky Ballesteros also pledged that there won’t be an increase in the prices of Sinulog tickets.

Vice President Jejomar Binay on Sunday visited towns hit the worst by Seniang and distributed 7,500 food packs to affected families. He also gave out cash aid to the families of those who died during the storm, saying he will still see if he can extend a similar assistance to other victims.

Binay also went to the wake of the seven members of Bajenting-Faunillan family in Barangay Liboo, Ronda. The family members died when flashfloods swept their home at the height of Seniang. A two-year-old and a one-month-old child are still missing.

Stories on his visit in Cebu:

CEBU VISIT. Vice President Jejomar Binay and 3rd District Representative Gwendolyn Garcia eat in a boodle fight, a shared meal where food is placed on top of banana leaves at the center of a table, in Dumanjug town. (Photo by Mitchelle Palaubsanon of The Freeman)

For thousands of commuters in south Cebu, returning back to Metro Cebu today for work or classes will be slow and difficult. Travel in the south has been complicated by the collapse of the Dumlog Bridge in Sibonga at the height of tropical Seniang five days ago.

A temporary road in Barangays Lindogon and Simala that can accommodate trucks and buses has been opened starting Sunday but only from 11 p.m. to 3 a.m. Since it is not open in the morning, bus passengers will have to get off at one end of the bridge, cross to the other side on foot or by motorcycle and take another bus there.

“We are trying our best to find another path,” said Cebu Provincial Information Officer Ethel Natera.

Classes resume today for all but three schools in Southern Cebu that sustained damages during tropical storm Seniang.

A landslide has rendered the way to the Calagasan National High School in Argao impassable, while classrooms were damaged in two Pinamungajan elementary schools – Tupas and Lut-old – after trees fell on them. The Department of Education (DepEd) has granted the request of Argao to suspend classes for one week in Calagasan. (The Freeman: Longer break for 3 schools)

In Ronda, which was badly hit by Seniang, the mayor wants to know why the Department of Social Welfare and Development (DSWD) has failed to extend help to storm survivors. Not a single food pack has arrived for Seniang survivors in Ronda, the mayor said, adding he expected the DSWD to help calamity victims.

“There is not even a single family food pack that arrived from DSWD to alleviate the suffering of my people. Where are the DSWD officials now?” — Ronda Mayor Mariano Blanco III. (Sun.Star Cebu: Mayor asks: Where’s DSWD’s help?)

On the business front, Cebu’s premier business organization looks back at 2014 while a Cebu Bankers Club official dispenses sound advice for local banks.

2014 another banner year for CCCI

When it comes to meeting goals, 2014 was another banner year of the Cebu Chamber of Commerce and Industry (CCCI). CCCI president Ma. Teresa Chan said the chamber has come to represent the voice of the business community. (Sun.Star Cebu: CCCI now ‘important voice’)

“Foreign banks are interested to operate and open branches here. The implication of that for local banks is either you merge with bigger (local) banks if you’re quite small or you can merge with foreign banks (…) If you’re small and you don’t have the technology, merge with them,” — Cebu Bankers Club president Gino Gonzales told smaller local banks. (Sun.Star Cebu: Merge with other banks to stay competitive: officer)