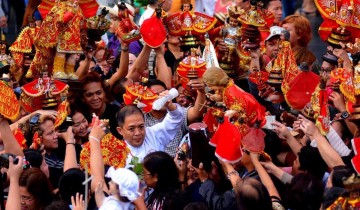 The Sinulog grand parade will focus on its religious roots as it marks its 35th year this 2015. The festival was officially launched yesterday with a parade that started at the Basilica del Sto. Niño. Previous winner and crowd favorite Tribu Lingganay from Alang-Alang town in Leyte province will join the grand parade again after skipping last year when it was devastated by Super typhoon Yolanda.

Meanwhile, sparks flew at City Hall with Cebu City Mayor Michael Rama threatening to sue the City Council over the deferral of the conversion of City Hall’s foreign loan for the South Road Properties (SRP) into a domestic one.

The Sinulog Grand Parade will highlight the festival’s religious significance as it marks the 35th year. This year’s theme is “Sto. Nino: Hope of the People” and organizers want to emphasize the religious component of the festival.

The festival was launched yesterday with a parade from the Basilica del Sto. Niño to Fuente Osmeña and the Cebu City Sports Center (CCSC).

“This is not just a cultural and historical event, this is a religious happening.” — Sinulog Foundation Inc. executive director Ricky Ballesteros.

Ballesteros said the festival is held on the 450th year commemoration of the finding of the Santo Niño de Cebu image and the 50th anniversary of the designation of what was then the San Agustin Church as Basilica Minore.

The stage at the CCSC, where contingents will perform their respective routines, is also patterned after the façade of the Basilica del Sto. Niño.

RELIGIOUS FOCUS. This year’s Sinulog Grand Parade will highlight the religious foundation of the festival.

Tribu Lingganay from Alang-Alang town in Leyte will be returning this Sinulog after skipping last year when Super typhoon Yolanda devastated their community.
Alang-Alang won in the free interpretation category in 2012 and 2013.

Cebu Daily News reported that 600 performers have been practicing since October for the Sinulog, even as typhoons Quennie, Ruby, and Seniang hit their community.

“We do not want to fail the Sinulog spectators. We wanted to make sure that we will be giving a good show.” — Alang-Alang contingent coordinator Kent Jefflord Guillermo.

Get Sinulog 2015 Guide on your phone!

The Department of Public Works and Highways (DPWH) installed yesterday the steel decks of a temporary bridge in Barangay Dumlog in Sibonga. DPWH 7 Director Ador Canlas said the installation might take five days but his agency will try to do it faster.

DPWH hopes the steel bridge will be passable before the important Sinulog events: the religious procession on January 17 and the grand parade on January 18.

The 18-meter approach to the Dumlog bridge, which links Argao and Sibonga, collapsed during a flash flood at the height of tropical storm Seniang.

The temporary bridge will have the 20 tons of capacity, the same capacity as the original span.

HONORING THE POPE. Inmates of the Cebu provincial jail dance to honor and thank Pope Francis for visiting the Philippines. (Photo from the Cebu Provincial Government Facebook Page)

More than 2,000 inmates at the Cebu provincial jail danced yesterday as prayer offering and thanksgiving to Pope Francis for visiting the Philippines. They danced to a Gregorian chant and the song “We Are All God’s Children.”

Cebu City Mayor Michael Rama criticized the Cebu City Council for asking him to submit a request for the passage of a resolution to authorize the mayor to negotiate with the Japan International Cooperation Agency (JICA) and the Bangko Sentral ng Pilipinas for the conversion of City Hall’s foreign loan for the South Road Properties (SRP) into a domestic one.

Rama said the councilors already knew about his plan and there was no need for him to file a request.

In 1995, JICA lent Cebu City 12.315 billion yen to develop the 300-hectare SRP. Rama wants to convert the yen loan into a domestic one to save on interest and foreign exchange losses.

NO NEED FOR REQUEST. Mayor Michael Rama says the councilors already knew about his plan and there is no need for him to file a request. (Photo from Mayor Rama’s Facebook Page)

“He wants to keep on filing, then let him file a case. He can do what he wants. Bahala siya.” — Councilor Margarita Osmeña

Councilor Sisinio Andales says a request from the mayor is required as part of protocol and procedure. Osmeña and Andales said they are in favor of restructuring City Hall has to follow procedures for transparency and accountability, The Freeman reported.

“But if he’s going to sue us. He can file case or whatever he likes. We are willing to face him. But as I said, we cannot take a shortcut, rather follow what is proper.” — Councilor Sisinio Andales as quoted by The Freeman

From just P500 a day as take home pay, Ronel Diapana now earns P900 after signing up with GrabTaxi, an app that allows commuters to hail taxis using their phones. Diapana told The Freeman that with the app, he can book 5 to 10 passengers during rush hours. The difficulty in getting a cab during rush hours is pushing more commuters to use apps like GrabTaxi.

“These groups will be an extension of CCCI in the far-flung areas in Cebu. We are going to help them become legitimate and advocacy-driven business groups and not just a mere social club.” — CCCI president Ma. Teresa Chan

An old Volkswagen camper van serves as the cashier’s section, oil barrels are turned into seats, car tools decorate the walls, while a gas pump…