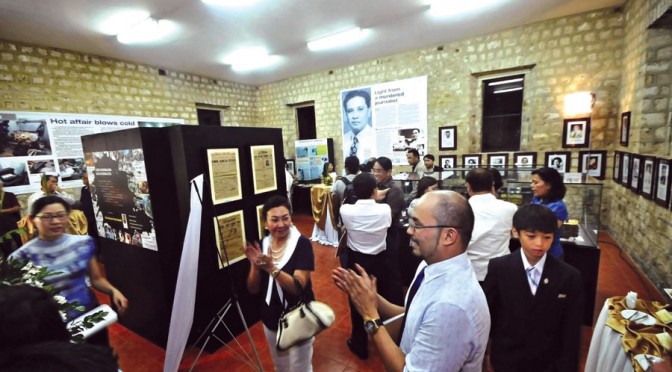 The Cebu Journalism and Journalists (CJJ) Gallery officially opened on September 24, 2010 to showcase the vibrant journalism in Cebu. It is the first community media museum gallery in the country.

OPENING. Guests view displays in the gallery during its opening. The Cebu Journalism and Journalists Gallery is the first community media museum gallery in the country. (SUN.STAR CEBU PHOTO)

Last March 11, 2010, the CCPC en banc approved the memorandum of agreement (MOA) between the Province of Cebu, represented by Garcia, and the CCPC, represented by its president, Dr. Pureza Oñate, to use this space in the Museo Sugbo for the exhibit for 25 years, free of charge. The contract is renewable for another 25 years.

The gallery contains photo frames with captions of pre-war and post-war journalists of Cebu with captions on their contributions to Cebu journalism. It also contains equipment like a Minerva letterpress, an ink knife, radio microphones and a Royal Quick Deluxe typewriter.

NEWSFLASH FROM THE PAST. Antonio Tormis Jr. takes photographs of a display focusing on his father, the editor and columnist Antonio Abad Tormis of The Republic News, inside the Cebu Journalism and Journalists Gallery. Tormis was gunned down on July 3, 1961, following his pursuit of stories about local government corruption. (SUN.STAR PHOTO)

Play the video below to listen to one of the gallery’s curators.

(This article is part of a project on Cebu tourism supported by Smart Communications, Inc., the Philippines’ telecommunications leader)

(This article was written by Mayette Tabada for the CJJ Media Gallery and is reprinted here with permission) For generations, men slaved over heated metal…

Battle of Mactan: history and myth

This spot is revered by Mactan Island residents more than any other place. A marker says it was on that site that a man who…