Cebu records hottest day in 2015; it will get even hotter: weather specialist warns 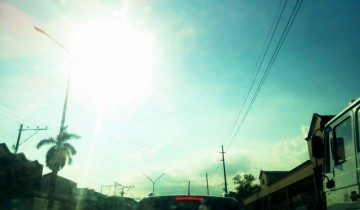 Cebu recorded today, May 21, its highest temperature for the year, with the weather station in Mactan logging 35.3 degrees Celsius at 2:30 p.m. That reading is the highest in the province in 2015, engineer Al Quiblat of the Philippine Atmospheric, Geophysical and Astronomical Services Administration Mactan Island station told MyCebu.ph.

In the days ahead, temperatures will go even higher because of the prevailing weak El Niño, Quiblat warned.

SCORCHING. Cebu recorded 35.3 degress Celsius today, the hottest since the start of the year, according to PAG-ASA Mactan.

In areas of the city with a dense concentration of buildings, it would be even hotter because of the heat island effect, Quiblat said. It typically adds 2 degrees to the temperature.

Highest in Cebu on record

The prevailing temperatures are higher than that of a typical summer without an El Niño, which ranges from 26 degrees Celsius to a high of 33 degrees Celsius.

The weather specialist warned temperatures could rise even higher because of the weak El Niño. The highest recorded in Cebu was 37 degrees on May 31, 1981, when El Niño was also in effect.

Quiblat said that based on the projections released by Pag-asa last May 6, 2015, there is a chance that the El Niño would be in effect and even strengthen into a “moderate” one later in the year.

He said that although it is hard to project, there is a possibility Cebu will again hit the 37 degrees Celsius reading later in the year.

To make the most of the many opportunities opening up as a consequence of the Association of Southeast Asian Nations (ASEAN) integration, Cebu Business Month or CBM 2015 schedule of activities will focus on establishing networks of local and global interconnections.

A year into her term as president, Ma. Teresa B. Chan reported that the Cebu Chamber of Commerce and Industry (CCCI) improved the productivity and broadened business ties of Cebu’s entrepreneurs. Cebu’s leading business organization conducted seminars, workshops, and trainings on entrepreneurship, human resource development, financial management, and other topics crucial to business growth and development from the start of her term on May 16, 2014, Chan said.