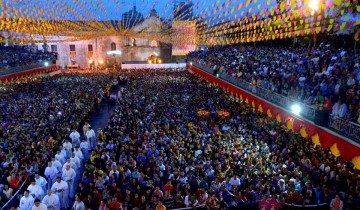 Expect heavy traffic in Cebu City starting at noon today for this afternoon’s Sinulog 2015 launching parade. Early yesterday morning, Cebu saw the “biggest and most attended Walk with Jesus,” which surprised church officials who expected attendance to be affected by the upcoming visit of Pope Francis.

In Mandaue, meanwhile, traffic officials said they have been called out by the public works department for allowing tricycles on national highways. They will discuss with drivers and operators possible route changes when tricycles are barred from national highways.

Both lanes of Osmeña Blvd. will be closed to vehicles this afternoon for the Sinulog launching parade that will start at the Basilica del Sto. Niño until Fuente-Osmeña. Traffic enforcers will close the roads by noon until the last contingent enters the Cebu City Sports Center.

The launch will start with a mass at the basilica at 2 p.m. to be followed by the parade at 3 p.m.

Drivers should follow traffic advisories and take alternate routes to ease traffic, said Citom Operations Chief Jonathan Tumulak. He said enforcers will be deployed along the route to guide drivers and communters.

“Let’s all be patient and keep cool to avoid trouble on the road.” — Citom Operations Chief Jonathan Tumulak

HUGE TURNOUT. Yesterday mornings Walk With Jesus and mass was attended by 57,000 devotees.

Thursday morning’s Walk with Jesus procession was the biggest so far since Fr. Jonas Mejares became rector of the Basilica del Sto. Niño de Cebu. He said it was the “most attended religious opening salvo” he attended.

The “Walk with Jesus” procession is a penitential walk while also serving as the opening of the religious activities of the annual Fiesta Señor.

Sr. Supt. Conrad Capa, officer-in-charge of the Cebu City Police Office, said 27,000 people joined the procession. He said 29,000 devotees were already in the basilica adding up to 56,000 devotees.

Get Sinulog 2015 Guide on your phone!

BANNED FROM NATIONAL HIGHWAYS. Tricycles like these will soon be banned from the national highways in Mandaue City. (Flickr photo by Gregory Perez under Creative Commons License)

Ermac said Mandaue City has been called out by the Department of Public Works and Highways (DPWH) for allowing tricycles on national highways. These include M.L. Quezon St., M.C. Briones St., Hernan Cortes St., A.S. Fortuna St. and Plaridel St.

A 2007 memorandum by the Department of Interior and Local Government banned tricycles and pedicabs on “national highways utilized by four-wheel vehicles greater than four tons and where normal speed exceeds 40 kilometers per hour.”

Ermac said they will change routes of jeepneys and as soon as the routes have been finalized, tricycles will be limited to interior roads.

DPWH to finish temporary steel bridge in Dumlog before Sinulog

If things go as planned, the Department of Public Works and Highways (DPWH) 7 will be able to install today the rest of the materials needed for the steel bridge to temporarily connect Dumlog, Sibonga to Argao.

But DPWH 7 maintenance division chief Elvis Calunod said that if materials and the rest of the equipment will not arrive today, the temporary bridge will only have one lane. Dumlog Bridge, which connects Sibonga and Argao, collapsed during tropical storm Seniang.

September to be tourism month in Cebu City

The Cebu City Tourism Council (CCTC) will declare September as Tourism Month. The city will hold shopping festivals that will offer bargains similar to the annual Black Friday sale in the US.

CCTC will also launch next week a new tourism campaign called Lakbay Lingaw or Fun Travel to showcase the various aspects of the city’s tourism from shopping to history and culture and eco-tourism.

“Bohol, Palawan and Camarines Sur are doing a lot to promote their respective destinations and if we don’t come up with coordinated efforts and fail to align our directions we will lose our spot as prime tourism destination.” — Cebu City Tourism Council chairperson Tetta Baad

The Sinulog grand parade will focus on its religious roots as it marks its 35th year this 2015. The festival was officially launched yesterday with…

Sinulog is both festive and religious. It is the biggest religious gathering in Cebu; it is also its biggest party – on the street, in…

1 Comment on Other side of Sinulog: Cebu turns into a big party zone; here’s where you should go
facebookinstagram
Loading Comments...