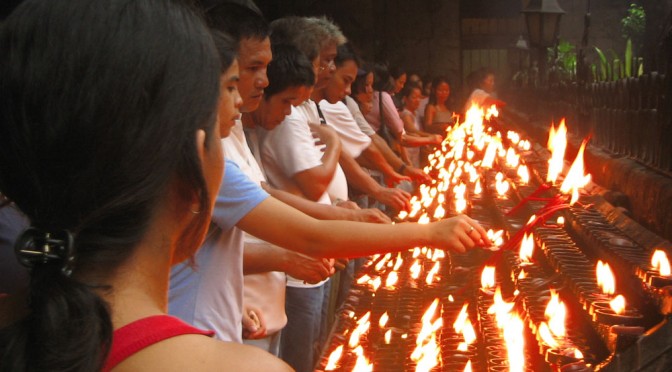 A typical afternoon at the Basilica del Sto. Nino church.

Cebu is an architectural feast of Spanish period churches in the styles of late Baroque, neoclassical, Greco-Roman, and Gothic or a combination of their elements.

The Augustinians came with Spanish conqueror Miguel Lopez de Legazpi to the Philippines through Cebu in 1565 and zealously went about converting people to Christianity.

Proof of their fervour is the churches of coral slabs and ornate retablos or altars, which were as much fortresses as they were places of worship, that can be found all throughout Cebu.

Although the Spaniards started building churches in Cebu in the mid to late 16th century, these were made of native materials like wood and nipa and did not survive the ravages of time and elements.

The oldest church in the island, the Basilica del Sto. Nino, was founded in 1565 but the current structure is of its 1735 construction. The church buildings built before this time were destroyed.

Below is a listing of churches built by the Spaniards in Cebu City:

The basilica blends Muslim, Romanesque, and neo-classical influences and houses the Santo Niño image, which is revered and venerated by devout Cebuano Catholics and central to the celebration of the Sinulog Festival every January. It is believed to be the same icon given by Portuguese explorer Ferdinand Magellan to Rajah Humabon’s wife, Hara Amihan, during the couple’s baptism and conversion to Christianity in 1521.

Formerly called San Agustin Church, the basilica was founded on the spot where the Santo Niño icon was discovered preserved in a burned wooden box by Legazpi’s soldiers by Augustinian priest Fr. Andres de Urdaneta in 1565. The first church structure was put up in 1566 fashioned from earth, hardwood, and nipa

Also inside the church is a museum that displays artifacts belonging to the Augustinians.

A block away from the basilica is the Cebu Metropolitan Cathedral, ecclesiastical seat of the Archdiocese of Cebu. Established as a diocese on August 14, 1595, Cebu was elevated into a metropolitan archdiocese on April 28, 1934.

The structure is cruciform and has thick and squat walls, and shows baroque-rococo influences in the bas reliefs of floral motifs and two griffins facing each other from the opposite ends of its trefoil-shaped pediment.

Work on the Cebu Metropolitan Cathedral began in 1689 but it was only the seventh construction attempt that was successfully completed in 1909 under Bishop Juan Bautista Gorordo, the first Filipino bishop in Cebu. The structure was damaged during US air raids in the Philippines in 1944 and only its facade, walls, and belfry remain intact.

Located along the main highway, the church of Pardo (a Cebu City barangay) is different in form from other Cebu churches built during the Spanish period. Where other churches are rectangular and topped by triangular pediments, widths longer than their heights when viewed from the front, the Santo Tomas de Villanueva Parish Church rises from the ground up, an imposing fortress.

Its Byzantine influences can be seen in the domed roofs of the towers and semi-circular headed windows and doors.

Construction of the current structure started in 1880 and followed the plans of Spanish engineer-architect Domingo Escondrillas.

Unlike other Cebu churches with their bell towers beside them, its belfry rises from the middle of its facade and is flanked by two towers that are not as high.

Other churches were built after the Spaniards were forced out of the Philippines in 1898 and now form part of Cebu’s historical heritage. These include:

Named after its patron “Our Lady of the Holy Rosary,” the Sto. Rosario Church is one of the busiest in Cebu City.

It holds almost hourly masses on weekdays and weekends, with the earliest service starting at 5 a.m. and the latest at 7 p.m.

Construction of this church on P. del Rosario St. was completed on August 22, 1933. It is located adjacent to the main campus of the University of San Carlos (USC) in downtown Cebu.

The structure underwent its third renovation in 2008 in time for its 75th founding celebration. An image of the church’s patron was added to its facade during the renovation.

The church is a 15-minute ride by cab from Ayala Center Cebu. It is also accessible by jeepney from most points in Cebu City; just board one that plies the Osmena Boulevard route and disembark at the unloading area nearest the Cebu City Central School.

Erected in the 1950’s, the Asilo dela Milagrosa Church is considered a local heritage site. Its lancet windows are of stained glass and hint of Gothic influence. Beside it is a garden plaza and within its compound is a charity house for orphans and senior citizens run by the Daughters of Charity of St. Vincent de Paul.

The church is located along Gorordo Avenue, and may be reached through any public transport bound for Lahug. The chapel is of walking distance from Ayala Center Cebu.

The Matilda L. Bradford Memorial Church was constructed in 1912 in Cebu City through the generosity of Mrs. Dwight H. Day who dedicated it in memory of her mother.

Its completion in 1913 marked an important milestone in the growth of Protestantism in Cebu. Located along Osmena Boulevard or what used to be known as Jones Avenue, the structure is the oldest evangelical church in Cebu City.

The church is walking distance from the Fuente Osmena rotunda. It is 15-30 minutes by cab from Cebu’s big malls like Ayala Center Cebu and SM City Cebu. It is also accessible by jeepney from various points in Cebu City. Look for a jeep with “Jones” printed on its route signboard.

Our Lady of Guadalupe Parish Church

The Vatican’s Congregation for Divine Worship and Discipline of the Sacraments in a pontifical decree dated May 9, 2006, declared Our Lady of Guadalupe de Cebu as the patroness of Cebu.

The church is located in Cebu City’s biggest barangay, which is Guadalupe.

It is a few minutes by cab from Fuente Osmeña and located close to the end of the route of Guadalupe jeepneys.

Built from the contributions of its mostly Chinese churchgoers, the Sacred Heart Church was completed in time to celebrate its first mass on Christmas Eve of 1960.

The Sacred Heart Parish-Jesuit, founded in 1952, made up the church’s community. The parish was originally dedicated to the “Our Lady Queen of China” and was established upon the request of Chinese-Cebuano Catholics who asked for a Jesuit priest to minister to their pastoral needs.

It was Fr. Miguel Pardinas, a Mexican priest expelled from China, who organized the parish that once used the ground floor of the Cebu Metropolitan Cathedral convent as a chapel for mass services.

The Sacred Heart Church is located along D. Jakosalem St. near where it intersects with General Maxilom Avenue, which used to be known as Mango Avenue. Taxi drivers know where it is and a trip to the church from the downtown and uptown areas would cost around 100 pesos.

If you want to go there by jeepney, board one that passes by General Maxilom or Mango Avenue and stop at the unloading area nearest the Iglesia Ni Kristo Church. The church is a short walk from the General Maxilom and D. Jakosalem St. junction.

A popular pilgrimage destination of Marian devotees in Cebu is Mary’s shrine in the village of Simala in Sibonga. The shrine is located inside an…