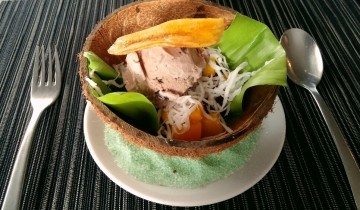 Balbacua turns into slow cooked oxtail stew topped with ginger flakes, dinuguan comes in a quiche topped with chicharon and crispy kangkong, while paella is wrapped in palm leaves shaped into a diamond container that Cebuanos call puso.

If you’re wondering what Cebu’s comfort or street food would be like turned into fine dining fare, then Feria Restaurant at Radisson Blu Cebu has the answer for you.

Feria provided a preview of the four-course dinner menu it will serve during the Cebu Chamber of Commerce and Industry (CCCI) Grand Chamber Awards and Fellowship Night that will be held at the hotel’s Sta. Maria Grand Ballroom this June 30. The awards is one of the highlights of the ongoing Cebu Business Month (CMB) 2015 celebration.

Radisson Blu Cebu director for sales and marketing Ann Olalo said CCCI asked for a different take on Cebuano cuisine to stay true to the CBM 2015 theme of a “Glocalized Cebu.”

Rising to the challenge, Feria executive chef Roberto Kunitz and his culinary team went out and sampled Cebu street food to determine the taste of original Cebuano fare.

“Cebu is a melting pot of culture, flavor, colors and different colonial influences. Most of the Cebu dishes we tasted were flavorful and urban; it was difficult to combine all those in a plated dinner,” added Kunitz, citing he and his team came up with dishes that are local but of modern approach.

STARTERS. The Island Platter contains the colorful fare of the island’s bounty.

Magellan’s Stew is balbacua with a twist, cooked slow the traditional way but with oxtail dumpling topped with ginger flakes.

The main dish is a selection of all-time Cebuano favorites: adobo, pork, chicken and chorizo barbecues, crispy pork belly arranged around the puso paella as centerpiece.

The 4-course menu ends on a sweet note with local tablea ice cream on a rice cake (bibingka) bed and topped with diced mango, shredded buko and banana chips. Dessert is fittingly served on a coconut shell.

BALBACUA WITH A TWIST. Magellan’s Stew is balbacua with a twist, cooked slow the traditional way but with oxtail dumpling topped with ginger flakes.

Food is one of the four Fs that will be the highlight of the Grand Chamber Awards, said awards committee chair Beverly Dayanan. The other three are Fashion, Furniture, and Fabulous Prizes.

Cebu is acknowledged as the Furniture Capital of the Philippines and those who attend the awards night will be treated to a showcase of furniture and design, she added.

According to Dayanan, top manufacturers and designers in Cebu will be tasked with providing the dinner furniture and designing the table settings. These include Finale Furniture and Home Accessories and Luisa Home.

At the same time, attendees will enjoy the prizes to be raffled off during the awards night, said Dayanan. One major prize will be a P750,000 discount to a condominium unit at the Bamboo Bay Community in Mandaue City.

A ticket to the Grand Chamber Awards costs P1,250 and can be bought at the CCCI office or at Radisson Blu Cebu.

Update: Port Restaurant has postponed its July promo. We just received this announcement from assistant manager Tom Pitogo. Here’s his statement: Please be advised that…

On its second year in the Philippines, Red Bull Thre3style gives 18 local DJs three chances to rock crowds with their originality in song choices,…