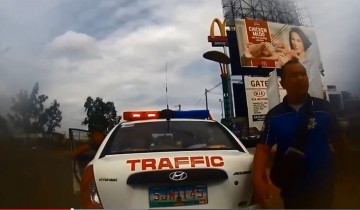 The Traffic Enforcement Agency of Mandaue (TEAM) is investigating 2 traffic enforcers accused of extorting money from a foreigner who was caught making a u-turn on a No U-Turn section of the North Reclamation Area.

Radio station dyAB broke the story earlier today. In an interview with the station, TEAM Chief Edwin Ermac said they are investigating the 2 enforcers. Ermac was also reported to have verbally reprimanded the 2 because the video showed them taking too long a time to deal with the infraction instead of just immediately issuing a citation. (Video and screengrabs of the video available below)

The foreigner and his Filipina girlfriend took a U-Turn at the intersection near S&R, despite a No U-Turn sign. He said in a text commentary edited into the video “But this is Cebu, nobody usually takes any notice.”

He then pointed how the enforcers ignored: 2 tricycles that shouldn’t be on the highway, motorcycle drivers with no helmets on, trucks and pick-ups “illegally loaded” with passengers, including people standing in the book.

He said on the video that he asked for a citation ticket (which has a P200 fine) but the enforcers pressured his girlfriend to pay them P2,000, instead. He said he was then asked to get into the police car and sit on the driver’s seat with the other officer was on the passenger’s seat.

While he was there, the other officer allegedly approached the girlfriend to pressure her to pay P2,000. He said they were then surrounded by street kids and when his girlfriend handed the money, the police officer allegedly instructed her to make sure the kids don’t see it.

We have reached out to the Mandaue City Government for comment but have not gotten any response from the Public Information Office.

Here are screengrabs of the video uploaded to YouTube.

Instead of giving a citation ticket, two traffic enforcers from Mandaue City allegedly extorted money from a foreigner. This was caught on video that was…

Charges have been filed against an Australian national, his underage girlfriend and parents involved in trafficking and pornographic activities of children in the municipality of…