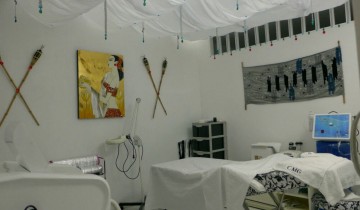 With little funfare, the Calayan Medical Group opened in Cebu last week and made available some aesthetic and wellness as well as dermatology services.

The company started operations at Oakridge Business Park in a limited capacity as a way of testing the market and correcting kinks in its operations, said Lalen Calayan, who is overseeing the operations in Cebu.

In a month or so, she added, the plan is to already operate full-blast and this involves making available all possible services, including body treatments, injectables, laser and light treatments, stem cell therapies, and cosmetic surgeries.

According to Lalen, the Calayan Medical Group is a family-owned company operated by a family of doctors spanning three generations.

“We’re trying to change our image into one that’s really professional. We want to highlight that we also do reconstructive, not just plastic surgery,” she said, citing that their surgeons are among the best in the country but she couldn’t name them because medical ethics prevent them from advertising themselves.

The Calayan Surgicentre Corp. in Manila is a household name in the cosmetic surgery industry, counting top Philippine celebrities among its endorsers.

Lalen said her grandparents are doctors and started the business and many of their children and grandchildren followed in their footsteps. For Lalen, though, the interest is in the operations and not the medical side of the business.

TREATMENT ROOM. One of the treatment rooms in the Calayan Medical Group in Cebu.

She added that the Calayan Medical Group’s plastic and reconstructive surgeons are from the Philippine General Hospital (PGH) and will come over to Cebu to do surgeries, in charge of the stem cell therapies is a former president of the Philippine Medical Association (PMA), and dermatological services will be handled by a resident dermatologist and two visiting dermatologists.

Certified estheticians will be in charge of aesthetic and wellness services like facials, peels, and body treatments.

One of Calayan Medical Group’s estheticians is Selina Sevilla, a 1990s singer who was among the first beneficiaries of the Calayan Surgicenter Foundation.

Sevilla said she was inspired by what the Calayan foundation is doing and studied to become an esthetician and become part of the business.

CHANGING IMAGE. Lalen Calayan, who overseeing the operations in Cebu, stresses they also do “reconstructive, not just plastic surgery.”

Lalen believes there is a market for Calayan’s services in Cebu but the rates take into consideration the value for money characteristic of Cebuanos.

“The prices (for our services here) will be reasonable,” she said, adding it will be cheaper than in Manila.

As part of its opening promotions, the Calayan Medical Group is offering facial services for only P688 until June 8, 2015.

Having been invited to try out any of the company’s aesthetic and wellness services during its soft opening last May 8, 2015, I picked out the ultima biodynamic facial and it was the ultimate in skin pampering.

It was a thorough and relaxing process that lasted close to two hours and involved cleaning, exfoliating, and nourishing the skin. When it came to removing whiteheads and blackheads, the process was surprisingly pain-free.

EGYPTIAN ROOM. The medical group’s Egyptian room in Cebu. Figuring prominently is the image of Cleopatra, which they say is the epitome of beauty.

Since the Calayan Medical Group believes in being thorough and there are a limited number of beds, Lalen advised potential customers to schedule appointments to ensure they would be accommodated.

Online promotions and word of mouth referrals through social networks helped a community in Aloguinsan build its eco-tourism project into what it is now: a sustainable project that has become a benchmark for other places embarking on a similar program.

An even bigger ballroom with sophisticated sound system, more seating and music choices for Blu Bar and Grill, and upgrades to the five-star hotel’s 101…