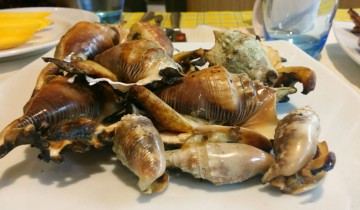 More than 60 mostly local Cebuano dishes are featured on top of the regular buffet spread of Marco Polo Plaza Cebu’s Cafe Marco up to January 21, 2015.

Cafe Marco is holding Sugbusog 2015 to feature Pagkaong Inato, well-loved local recipes, in a five-star restaurant setting and amid the festive atmosphere of the Sinulog Festival 2015.

The boiled cardaba (kind of banana) and kamote (sweet potato) that came with spicy ginamos and green mango with hipon were just too good to resist. I ended up having seconds.

From January 9 to 21, as Cebuanos celebrate the month-long Sinulog Festival in honor of the Señor Sto. Niño de Cebu, the buffet dishes at Cafe Marco reflect your typical Cebuano fiesta fare.

A very typical Cebuano dish is the adobong mais kan-on (corn grits), as Cebu is probably among a very few places in the Visayas that serve it.

Kan-on mais or corn grits is a favorite among many Cebuanos.

As she explained the Sugbusog concept, a restaurant staff in a typical Filipino kimona and long skirt came by carrying an ice bucket and offered us ice candy. It was too good an opportunity to pass up having a favorite childhood snack.

The humba is a favorite local pork dish.

What really excited me were those native desserts that I love so much. There’s puto paired with sikwate (hot choco drink made from cacao beans) and mango, polvoron, linusak, biko, bingka with salted egg, masareal, and saging minatamis. I had to have a little of everything.

At the trolley section, there’s balut #18 with salt and pinakurat, which I lacked the courage to try. The popular street food taho finds its place in a five-star restaurant.

All these and more for the net price of P1,099 for the lunch buffet and P1,395 for the dinner buffet in Sugbusog 2015 at Cafe Marco. It’s truly an iconic culinary journey.

(Disclosure: Marco Polo Plaza Cebu is a partner of our start-up InnoPub Media. They are a sponsor of our Cebu Guide and we were the ones who created their app.)

Pope Francis arrived to a massive Filipino welcome yesterday. People lined up the streets to catch a glimpse of him as he rode on his…

Party your heart out for free in two major Sinulog Festival 2015 events – Life Dance and Sinulog Invasion. MyCebu.ph, in partnership with Smart Communications,…