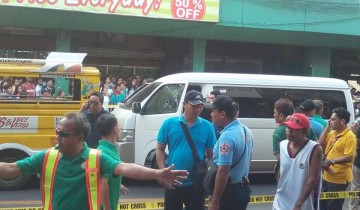 Businessman Jaime Blas Villaceran was killed in an ambush at the intersection of Colon St. and Osmeña Blvd. past 7 a.m. yesterday, shortly after he dropped of his two daughters at school. He was 36.

Villaceran was driving a Toyota Hi-Ace Grandia and was about to stop for a red light when two men on a motorcycle approached the van. The passenger then shot at him. Police said Villaceran died of multiple gunshot wounds in different parts of his body.

“He is in our watch list on illegal drugs. I cannot divulge what his level is with due respect to his grieving family.” — Supt. Romeo Santander, according to Sun.Star Cebu

Santander said Villaceran had been in the drugs watch list for a long time although he had never been arrested. He lived in Barangay Lorega-San Miguel, Cebu City.

Sun.Star Cebu reported that Villaceran was said to have sold pork and chicharon and operated a lending firm.

COLON AMBUSH. Businessman Jaime Blas Villaceran was killed in an ambush at the intersection of Colon St. and Osmeña Blvd. past 7 a.m. yesterday. (Photo posted on Facebook by FB user Rik Rik Onartsipac)

Cebu City Mayor Michael Rama ordered the CCPO to conduct a stringent investigation on the killing and to explain why there were no police officers in the area.

“How did it happen? I would like to make a very clear position sa ilaha (to the police). Look for the culprit. Di man na mahimong ingnon drug involvement ra (They can’t just say drugs were involved). It’s not an excuse. There is a crime. Look for the culprit.” — Cebu City Mayor Michael Rama, according to Sun.Star Cebu

Criticisms will not stop Cebu City Mayor Michael Rama from removing the center island on Cardinal Rosales Ave. to Gov. Cuenco Ave., from the Ayala intersection to under the flyover, to ease the traffic gridlock in the area.

Trees on the island will be earth-balled and transferred to the Cebu City-owned lot at the North Reclamation Area, Sun.Star Cebu reported.

“I have to address the traffic problem in that area now because if I don’t, the situation will be worse in the future… So to those who are opposing, let me ask… what is your alternative?” — Mayor Michael Rama

The center island will be replaced with steel railings that can be removed as needed. Read: Ka Bino Guerrero’s open letter to Mayor Rama about the plan.

De los Reyes told more than a thousand supporters gathered for this speech at the Tabunok Public Market that despite not getting the support of members of the City Council, which is dominated by Alayon, he was able to do more than his predecessors.

The slashing of the budget was among the key issues de los Reyes raised against the council during his State of the City Address.

Vice Mayor Romeo Villarante, a former ally, also denied they were being obstructionists. He did not attend the SOCA but listened to it on the radio. Villarente said what happened was not a state of the city report but a miting de avance or political gathering.

Central Visayas will see drier weather ahead and an average temperature of 32 degrees Celsius, said PAG-ASA Visayas Director Oscar Tabada. This is because of the El Niño weather phenomenon, which is expected to be in effect in the region until the middle of next year.

“Let’s stop talking about who owns it, it belongs to the people of Cebu, not the Province, not the City, it’s for everybody.” — Cebu Governor Hilario Davide III

» Turnover of Bantay Radyo to coop identified with Garcias not a problem, says Gov. Davide

» Online freelance work on the rise

» Unit rentals next step for Azon Residences in Lapu-Lapu City

There’s a delicacy that’s bubbling in Cebu. Tuslob buwa is basically puso (rice cooked in woven coconut leaves wrapping) dipped into a sauce simmering away in a frying pan, hence the name tuslob (to dip) and buwa (bubbles) or more accurately, the froth that is formed when the soup of pig’s brain with liver and spices simmers in a frying pan until it is reduced to a thick sauce.