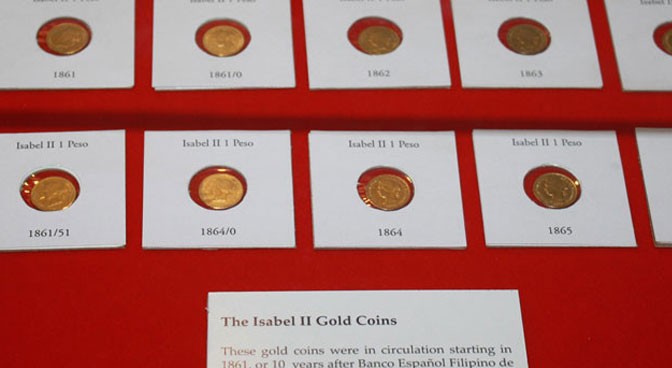 Ever wondered how and when banking started in the Philippines? The oldest bank in the country, Bank of the Philippine Islands (BPI), tells the story through its newly opened museum in Cebu City.

On display at the museum are gold coins that started circulation in 1861, 10 years after the El Banco Español Filipino de Isabel II that we know today as BPI was established.

The museum was launched last September 5 at the BPI Cebu Main building, itself a piece of history, on the occasion of the bank’s 160th anniversary.

BPI president Aurelio Montinola III said the museum symbolizes the partnership between BPI and Cebu, where the bank opened its third branch in 1924 after Iloilo and Zamboanga.

“Cebu has a long history with BPI, and the building is quite historic,” he said, to explain why the picked Cebu as site of the museum. Bank officials said they saw it fit to share with Cebuanos valuable memorabilia that are deemed significant contributions to the country’s banking history.

According to Montinola, it will be up to Cebu bank officials to decide the museum hours.

First banknotes issued not only in the Philippines but throughout Southeast Asia.

The museum also carries the first ever Philippine banknotes issued by BPI on May 1, 1852. These were the first banknotes issued not only in the country but even throughout Southeast Asia, and they could be redeemed for gold or silver Mexican coins.

Also on exhibit are a collection of coins of varying denominations from the last 50 years of Spanish rule: 10 cents, 20 cents, 25 cents, 50 cents, 5 pesos.

* Coins issued during the reign of King Ferdinand VII counterstamped with “Y II” for Isabel II, his daughter and the only female monarch of Spain in modern times.

Cebu Capitol consultant on museum affairs Jojo Bersales explains the significance of the memorabilia on display at the museum during its launching last week.

* Handwritten and leather-bound bank journal of 1855. The escribientes or writing clerks who wrote on this journal had to be trained to do the task in the accepted script.

* Government-issued coins from 1903 to 1908 that were designed by Melecio Figueroa; they were the signature coins of the American colonial period.

Then there’s the book that details the bank’s purchase of the corner lot where the building now stands along Magallanes and P. Burgos streets from the Augustinian friars for only P65,610.

Another part of the collection is the original plans for the building drafted by famous Filipino architect Juan Marcos Arellano, who is known for his work on Manila’s Metropolitan Theater, National Museum of the Philippines, Jones Bridge over the Pasig River, and the Cebu Provincial Capitol.

Cebuano artists also have a gallery space in the museum. Currently on exhibit until October 5 are the works of noted Cebuano painters led by Romulo Galicano. The paintings are available for public viewing.

Bantayan Island, known for its crystal-clear waters and long stretch of powdery white sand, is considered one of the tropical attractions of the Philippines. It…