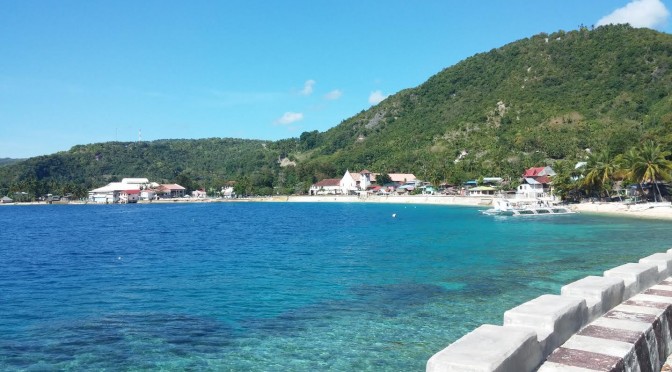 If you’re planning a Cebu trip during the Holy Week break and feel that the holiday island of Bantayan will be too crowded, you might want to consider Boljoon and its neighboring towns in your travel itinerary.

It is not difficult to see why. Boljoon sits, like a postcard picture, on a narrow strip of land between the towering green mountainsides and bright blue seas.

Travelers come across Boljoon when the coastal road makes a sharp turn along a colossal promontory that hides the town from view. Boljoanons consider this natural rock formation one of the town’s landmarks and call it Ili Rock.

Boljoon sits, like a postcard picture, on a narrow strip of land between the mountain and the sea.

I’ve been to Boljoon several times but I’m never tired of the sight that greets me when our vehicle completes that bend in the road. From that spot some distance away from the town center, Boljoon is laid out in a picturesque marriage of land, sea, and mountain.

The town is also a jump-off point for travel to the nearby towns of Oslob with its whale shark watching attraction as well as Samboan and Santander, which are the last two towns south of Cebu island.

This southeastern town was a prime target of Moro attacks in the early 17th up to the 19th century possibly in retaliation to Spain’s attempt to conquer and subjugate Mindanao, according to Paul Gerschwiler in his book “Bolhoon: A Cultural Sketch”.

He said one destructive raid that occurred in 1782 reduced the town to ashes – its houses and church burned – and prompted a Spanish priest assigned to the parish in 1802 to organize a proper defense system against the Moros.

The Patrocinio de Maria Church in Boljoon, completed in 1841, served both as place of worship and fortress during the Moro sieges.

The priest’s name was Fr. Julian Bermejo and he was behind many of the Spanish colonial structures that have become major Boljoon travel attractions.

Farther away from the town center, there are 19th century houses, an old spring called Baño sa Poblacion, and baluartes (watchtowers).

For more information about the town and its many attractions, we have a mobile web guide to the town as boljoon.myguide.ph.

When it comes to accommodations, the town has a choice of seaside resorts and inns as well mountain retreats.

Many of these places are just by the sea or near it. They are affordable and easily accessed from the coastal road that runs through Boljoon.

Club Fort Med is nestled between the mountain and the sea. It is a combination of fine white sand, lush gardens, and quaint cottages on a hectare of seaside land. There is also the Granada beach house, which is an eight-bedroom rustic property set atop a cliff with a 180-degree view of Boljoon’s seas.

Since the beach is located about a kilometer from the main road and reached through a narrow winding road, it is secluded and very private.

Noordzee Hostel offers both budget rooms that appeal to backpackers. On its rooftop is the Noordzee Restobar which serves Dutch cuisine.

Palanas Farm and Resort distinguishes itself by its location, which is not by the seaboard but in a tranquil valley of the rural town. Getting to this mountain retreat is through a well-paved mountain road. For a list of more places to stay in Boljoon and what they have to offer, go to boljoon.myguide.ph.