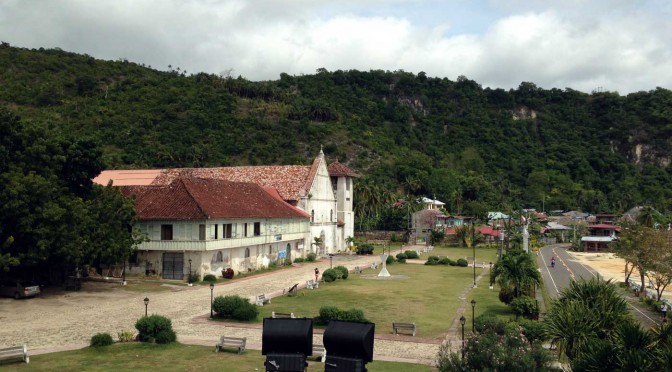 Aside from being picturesque and postcard-perfect, historic is also another word that locals and even historians use to describe the southwestern town of Boljoon in Cebu.

Other than the quaint picture it presents as it sits on a narrow strip of land between the placid blue sea and tall mountain ridges, the settlement of Boljoon also had an important role to play in the olden days.

Here in this rural town began a strong and proper coastal defense against piratical attacks by marauders from Mindanao and it was organized during the early 19th century by a Spanish priest hailed in the south as “El Parroco Capitan.”

His name was Fr. Julian Bermejo and he became the parish priest of Boljoon in October of 1802 hearing stories from early settlers about the brutality of these raids. The defenseless settlements would see their people getting killed or taken captive and their houses burned to the ground.

Fr. Bermejo’s system involves a series of watchtowers and stone walls and buildings throughout the south that serve as lookout and refuge during the sieges.

In Boljoon, these centuries-old fortifications have been mostly preserved and are open to visitors. A walk around the the Parish Complex where these buildings are located is like stepping back to a colorful and turbulent period of the town’s past.

WORSHIP, REFUGE. Construction of the Nuestra Señora del Patrocinio Church was started a year after slave traders destroyed the old one in 1782. The imposing edifice, with its thick stone walls made of coral slabs and high windows, served a dual purpose: as place of worship and refuge for the people during the pirate sieges. (Photo by Max Limpag)

A central structure to the Parish Complex is the Nuestra Señora del Patrocinio Church and it was started a year after slave traders destroyed the old one in 1782. It was, however, completed only in 1814 during the tenure of Fr. Bermejo as parish priest, according to the Cebu Archdiocese’s book “Balaanong Bahandi.”

The imposing edifice, with its thick stone walls made of coral slabs and high windows, served a dual purpose: as place of worship and refuge for the people during the pirate sieges, said Boljoon heritage and tourism officer Ronald Villanueva.

About 90 percent of the Patrocinio de Maria Church is of the original construction, and it has preserved its choir loft and pipe organ although the latter does not work anymore.

In keeping with the period’s trend, the church’s ceiling was painted with religious art in the 1920s to 1930s not by a well-known artist but by a local one known as Mariano Villareal.

Villanueva said it is the only existing fortress church with an almost intact enclosure, as only the sea-facing side of the rectangular fort that fenced it in had been destroyed. It was demolished in the 1900s to make way for the coastal road, he added.

The quadrangle fort that protected the church and other structures within the Parish Complex came with bulwarks at the corners. It remains mostly intact and is one of town attractions. Only the wall facing the sea is missing as it was demolished in the 20th century to make way for the coastal road, explained Villanueva. The portals at the side and back are also largely undamaged.

The Parish Complex is located right at the heart of Boljoon just beside the road where the buses make their stop. The structures within it were central to the running of what was then the pueblo of Boljoon during Spanish colonial times.

ANTIQUE CHAIR. This antique furniture can be found inside the Boljoon rectory. (Photo by Max Limpag)

The rectory is probably the oldest and biggest remaining residential building from Spanish colonial times in Boljoon. It is located beside and connected to the church and shaped like an L in accordance with the tradition of the period.

It is among Cebu’s biggest rectories and used to host top members of the clergy who were regular visitors to Boljoon during Spanish times, explained Villanueva.

Boljoon’s rectory, called kumbento by the locals, was completed in 1847 under the leadership of Fr. Bermejo. It is an example of a typical balay na bato, a Spanish improvement on the post and beam nipa house of the natives.

The rectory’s ground level, which used to serve as bodega or storage as was common in typical Spanish-colonial residential building, now houses a museum displaying the town’s ecclesiastical and liturgical artifacts. It is open from Tuesday to Sunday, 8 a.m. to 4 p.m. Entrance fees are P20 for students, P25 for other locals, and P50 for foreigners.

A wide grand staircase with ornately carved posts lead up to the second floor which serves as the building’s living space. An antique collector many years ago offered to buy the staircase for half a million pesos.

Worth a visit is the inner courtyard between the rectory and the church which has the mountain as a backdrop. Displayed on the convent wall beside the church are pictures of old Boljoon people, events, and places.

Between the church and the edge of the road is a plaza that serves as perfect vantage point for viewing the church, Ili Rock, and the town cove. In Spanish colonial times, the plaza was the focal point for religious activities and festivities. It is still used today as a starting point for processions and similar events.

Boljoon’s bell tower is unique in its plainness, said Gerschwiler, adding the structure “does not look like a well-designed belfry of the early 19th century.”

The belfry, which is shorter than the church’s facade pediment, may be considered a professional mismatch with the church.

One explanation for this, according to Gerschwiler, is it was built around the same time as the first stone church that was razed to the ground during the pirate raid on what was then the settlement of Boljoon in 1782.

It served as both a watchtower or lookout and belfry.

WATCHTOWER. When it was completed in 1808, the El Gran Baluarte’s ground floor was used as storeroom for weapons and ammunition and held a prison cell. The upper level served as a defense station armed with cannons. (Photo by Max Limpag)

One of the fortifications constructed by Fr. Bermejo within the complex is a two-level blockhouse facing the sea that now serves as a bell tower. In Fr. Bermejo’s days, said Gerschwiler, this served as a watchtower and bulwark.

The structure, which the town now calls El Gran Baluarte as it is the biggest watchtower built in Cebu, played a central role in the defense system of fortresses put up by Fr. Bermejo to deter pirate attacks.

Back in 1808, when it was completed, the ground floor was used as storeroom for weapons and ammunition and held a prison cell. The upper level served as a defense station armed with cannons.

Inside this bulwark turned belfry, visitors can still make out prisoner markings on the walls: Spanish galleons and even a pagoda with smoke coming out of it.

PRISON ART.A drawing of a Spanish galleon by one of the prisoners jailed in the El Gran Baluarte.

This served as the first Christian burial ground in Boljoon, probably constructed together with the first stone church in the 1760s. The cemetery gates are made of cut coral stones with a symmetrical gateway. It has an arched opening with a three-layer pediment decorated by finials on the two lower layers and a stone relief of a skeleton on the top layer.

The ancestors of many Boljoon residents are buried in the cemetery.

It now serves as meeting place for the various religious groups of the parish. It is not a typical Spanish colonial building, bearing instead American construction influences.

Although neither within nor a part of the Parish Complex, this coastal park is located close enough to be grouped together with Parish Complex attractions. Plaza Bermejo, which is across the road from the church, is not among Spanish colonial or American era structures. Nevertheless, it was created in tribute to one of the town’s great Spanish period personalities – Fr. Julian Bermejo.

Fr. Bermejo was responsible for putting up a defense concept against the Moros who used to pillage the town and abduct villagers. His system involved communication among a stretch of watchtowers over a distance of 96 kilometers, from Santander in the south to Carcar in the north, using flags and Budyong shells.

This plaza named after him is located along the Boljoon coast and is a good place to take a stroll or just relax with family and friends.

Get a comprehensive guide to Boljoon by downloading the “Boljoon Guide” mobile app.

If you want a place where you can drink coffee and do some work or business on the side, then Cafe Namoo is not for…

From food to dry goods, Carcar delicacies and specialties are created with the Carcaranon values of hard work and creativity. Take for example the Carcar…