More than just a beach paradise, Bantayan is buwad heaven

More than just a beach destination, Bantayan Island is also known for its delicacy – buwad or dried fish. From the popular danggit or dried rabbitfish to dried squid and even such exotic products as fish tocino, Bantayan has a wide range of these popular pasalubong items.

The best place to find dried fish is at the Dried Fish and Vegetable Market in Barangay Suba in the town of Bantayan, one of the island’s three towns. The two other municipalities are Santa Fe and Madridejos.

The market displays various types of dried fish or buwad and is popular among tourists who buy them for pasalubong. The danggit and squid are some of the best sellers. Another type is the fish tapa or the filefish’s meat, that compared to the ordinary buwad, is shaped into circles and flavored. The fish tocino is tender and sweet. These are often consumed as snacks or pulutan or to go with drinks.

From the sea to the dried fish market, the process of making buwad is laborious, and a vital part of the process is the role played by the “mamukyaray.”

A mamukyaray slits the fish open, takes out its guts, soaks it in saltwater before smothering it in salt for drying on a “kaping”: a contraption made of quadrangle nylon screen wire, and dried for 4 to 6 hours under the sun, depending on the weather.

One of the suppliers of dried fish on the island and in other parts of the country are the residents of Botigues Island, located southwest of Bantayan Island. It is an island barangay of the Municipality of Bantayan. Anabelle and Cingzon Saransan’s buwad business for 20 plus years supported their sons from finishing their college degrees, the eldest is now a seafarer and the second one is a Criminology graduate.

“We started our business in Bohol with just boneless danggit until we continued it here in Botigues. Then, with only P7,000 as our capital and managing it properly, we were able to make the business thrive,” Anabelle Saransan said.

Elsa Brufal, the 48-year-old mamukyaray of the Saransan’s buwad business for 15 years, and her fisherman husband made their daughters graduate from college through their earnings making dried fish. One daughter now is a public school teacher and the other is a Business Administration graduate who works in the city. Elsa has since stopped being a mamukyaray. Her daughters are now supporting them and have asked them to stop working.

Before the pandemic, Saransan’s buwad business was smooth sailing and had big revenues. However, throughout the pandemic’s peak last year, it underwent a significant downfall, a price drop of products due to limited buyers because tourists were not yet permitted to travel to the island.

It had also gotten to a point when their fishermen stopped working for them because of the small pay for they also bought the fish at a cheaper amount than pre-pandemic days. There is also a price reduction in Taboan Public Market in Cebu, where they supply and sell their products.

Fortunately, a couple of months later, everything started gradually moving back to normal, including their business. With the aid of social media and technology, it became easier for them to reach their buyers and market their products across the country.

“With God’s help, we were able to survive and cope despite the crisis,” Anabelle said.

Glistening white sands, deep azure waters, and palm tree-fringed shoreline, a paradise that is 5-6 hours off from the clamorous and stressful city, Bantayan Island, on the northern coast of Cebu, certainly never steps out from the limelight. After going around the island and experiencing the must-do activities such as cliff jumping, diving, island hopping, skydiving, road trips, and to name a few, it has been a tradition of every Filipinos to buy “pasalubong” for buddies and relatives. Of course, the island has something for the tourists to take with them after a well-deserved tropical rest, the popular buwad delicacy.

A trip will never be complete without a pasalubong. If you are planning to travel or go back to the island for a beach break, you must include buying buwad in the Dried Fish Market in your itinerary. 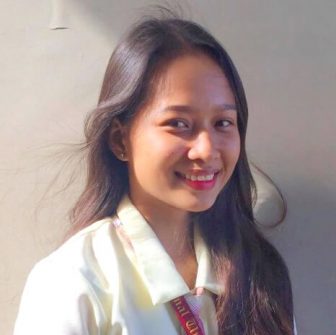 Maria Janica L. Diongzon is an InnoPub intern and an incoming 4th-year student at Cebu Normal University taking up Bachelor of Arts in Communication Major in Journalism. She resides in Bantayan Island, where she enjoys being at the beach and chasing sunsets. Janica has been writing since her 10th grade. She loves poetry and feature stories.