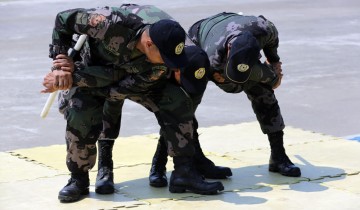 The Cebu City Police Office (CCPO) is asking the Cebu City Government for P116.2 million to fund security preparations for two international events that will be held in Cebu in the next few months.

Seventy families living in Inayawan landfill, meanwhile, were advised to transfer from what Cebu City officials deem as a danger zone.

Saying that equipment and mobility of the city’s police force will be “very important” in preparation for the International Eucharistic Congress and the Asia Pacific Economic Cooperation (APEC) Summit, the CCPO is asking the City Government for P116.2 million.

“The CCPO is in dire need of support from the local government unit since the equipment being issued by the Philippine National Police national office is very minimal and not able to cope with the logistical requirements of this police office.” — CCPO officer-in-charge Marciano Batiancela Jr.

Councilor Dave Tumulak, chairperson of the City’s Peace and Order Program, said the items will be reviewed to confirm whether these can be charged to the P400.5-million budget of the City this year for peace and order.

SECURITY. The Cebu City Police Office says equipment and mobility will be “very important” in preparation for the International Eucharistic Congress and the Asia Pacific Economic Cooperation Summit that will be held in Cebu in the coming months. (Creative Commons Photo by the US Defense Department)

The Cebu City Government is investigating the loss of 10 stubs of community tax certificates (CTC) worth about P50,000. Ten City Hall employees will face an investigation, according to City Treasurer Diwa Cuevas, who said they will not take the incident lightly to prevent it from happening again.

Cuevas said the stubs were lost in January but it was discovered only recently by one of the City Treasurer’s Office’s liquidating officers. Two employees have been reported to the Waterfront Police Station, she said.

“I want them to know that this office means business. Kung makasala sila, they have to answer for it.” — Cebu City Treasurer Diwa Cuevas, as quoted by Sun.Star Cebu

A pile of risks face families living in Inayawan landfill

Because 70 families living in Inayawan landfill are facing the risks of fire, trash slide, storm surge and poor sanitation, they will have to go.

The recommendation is based on the result of the inspection conducted by the disaster team last month after Inayawan Barangay Captain Lutherlee “Lot-Lot” Ignacio-Soon requested them to assess the area.

“It’s really risky for residents there. The pile of garbage is really high. There is also the risk of methane buildup that can cause combustion especially with the summer heat.” — Councilor Dave Tumulak, head of the Cebu City Disaster Risk Reduction and Management Council (CCDRRMC)

“People should not live there. It’s inhuman for society to allow that to continue. It’s hazardous to health and poses danger to life and limb.” — Jade Ponce, head of the Solid Waste Management Board (SWMB)

For several long-time residents, though, they didn’t feel their lives were in danger at all.

A Korean firm’s unsolicited proposal to develop the landfill as a P3.5 billion commercial mixed-use project at no cost to the city is being reviewed by a joint-venture selection team in City Hall.

Cebu Daily News: Libel rap against Nalzaro to get a full-blown trial

“Well, sometimes you win, sometimes you lose. It’s one of the hazards of the profession. But it’s not the end of the fight yet. There’s still a very long way to go.” — Bobby Nalzaro in a text message to Cebu Daily News

“While the Internet has proven to be a powerful and effective tool in the house-hunting process, there is still a largely untapped group of homebuyers who prefer to look for property the old-fashioned way. Often they still prefer picking up the phone and calling a licensed real estate broker than searching online.” — Lamudi Philippines statement on “Dial 4 Home” initiative

The Freeman: Hospitality sector upbeat despite rise of condotels

More than P5 billion worth of projects were approved and endorsed by the Cebu City Development Council. Several National Government agencies want to implement these…