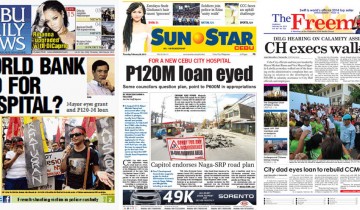 With the hope of decongesting Natalio Bacalso Ave., the Cebu Provincial Development Council (PDC) endorsed the proposal to study the opening of an alternative road.

Yesterday, the Cebu Provincial Development Council endorsed a proposal by the Minglanilla town council to study the opening of the old Philippine Railways as an alternative road from Naga to Cebu City.

The proposal sought to fund and to conduct a study on the feasibility of building a road on what used to be the Philippine Railways tracks, which ran parallel to Natalio Bacalso Ave. It was located along the Minglanilla shoreline, about a kilometer away from the main highway. To the south, the track used to stretch all the way to Argao town.

According to Minglanilla Mayor Elanito Peña, there is a great need for an alternative road since the national highway from Naga to Talisay is seeing heavy traffic and bottlenecks in some areas.

Cebu City to get P120-million loan for CCMC construction; loan to pave way for WB grant

The Cebu City Government’s executive department is looking at availing itself a P120-million loan from the Land Bank of the Philippines (LBP) for the construction of the new Cebu City Medical Center (CCMC).

The amount is only about 10 percent of the total estimated cost of the project, which ranges from P1.2 billion to P1.5 billion.

But the loan will pave the way for the City Government to avail itself of a grant from the World Bank’s Support for Strategic Local Development and Investment Project, according to Councilor Noel Wenceslao in a proposed resolution filed by before the City Council yesterday.

Sun.Star Cebu: Filinvest turns over to owners units in One Oasis Kasambagan

Sun.Star Cebu: Organization to work with GK on ‘social tourism’

The Freeman: Cebu as “second home” gets additional boost

For allegedly raping three girls—his two stepsisters aged six and seven, and their cousin aged three—a 17-year-old boy was taken into custody by the police….