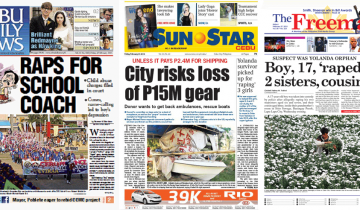 For allegedly raping three girls—his two stepsisters aged six and seven, and their cousin aged three—a 17-year-old boy was taken into custody by the police.

Police say 7 men were involved in the Feb. 20 shooting at a fastfood chain in Tabunok, Talisay City that killed German national Heinrich Haffner and injured 2 other foreign nationals.

Three suspects have been arrested. Supt. Rex Derilo, a member of Special Investigation Task Group (SITG) Haffner, said they are after four more suspects, including a certain Dexci Gomonte, also known as Tata.

Gomonte was one of two gunmen caught by the food chain’s security camera going after Haffner, police said.

Police picked up the boy and turned him over to the City Social Welfare Services after the parents and grandmother of the girls sought their help last Wednesday.

The minor is a fourth year high school student who would help babysit the three girls and sell mangoes at a stall rented by the family at the public market in Barangay Poblacion. They lived in the same house and slept in the same room.

The boy hails from Tacloban City in Leyte Province. He denied molesting the three girls.

“He might face a complaint for statutory rape but it depends now on the court, considering he is a minor,” –Senior Insp. Judith Besas, chief of the Lapu-Lapu City Police Office Women and Children’s Protection Desk.

Bacalso alleged called a pupil “baboy” (pig) and “bayot” (gay) in front of his teammates during basketball practice starting when the boy was in grade 4. The boy is now 15 years old.

“He would hurl invectives and insult me and I was very scared and intimidated by his acts and humiliating words. Cuss words like bogo (moron), bayot (gay) were uttered even at my slightest infraction.” — complaint-affidavit of the boy

Bacalso will have to face trial in a case of violation of Republic Act 7610 or the special protection law against child abuse, exploitation and discrimination.

He maintained his innocence.

”Of course I’m nervous because I’ve never faced anything like this. But I’m trying to look at it with a positive light. If you haven’t done anything wrong, then there’s nothing to be afraid of. The only thing I’m wary of is that I don’t have the finances to fight this case.” — Thaddeus Bacalso

The Freeman: CHED: Strict imposition of rules vs schools wanting to raise fees

Cebu Daily News: ‘Tech-driven entrepreneurship should be taught in school’

The Freeman: Group to set up enchanted farm in Cebu

The Freeman: SM Group to expand operations in rural areas With the hope of decongesting Natalio Bacalso Ave., the Cebu Provincial Development Council (PDC) endorsed the proposal to study the opening of an alternative road….