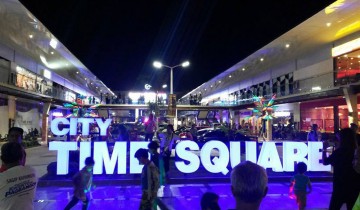 The Department of Public Works and Highways (DPWH) 7 announced that the concreting in A.S. Fortuna Street will be completed on May 26.

Expecting rise of local and foreign tourists in Bantayan Island and of workers going home to their provinces during Holy Week, the Cebu Provincial Police Office (CPPO) will set up measures to heighten security during that period.

E-Bingo Club robbery an inside job?

The robbers had locked the seven employees of the club—the security guard, two cashiers, gaming head and three attendants—inside the comfort room. One of the robbers carried a .45 pistol while another carried a KG9 pistol.

Then they fled in the direction of Barangay Subangdaku.

The police received a call for help at 2:14 p.m. Because the robbery looked thoroughly planned, they are not discounting the possibility that someone working inside the bingo place may be involved with the robbers.

The CPPO will deploy 120 police personnel in Bantayan Island during the Holy Week due to the increase in the number of tourists going there.

They are also bracing for traffic problems with workers expected to go home to their provinces during the period. Traffic problems may also come in the form of some other towns having activities along the highway during the Holy Week.

Since February 15 last year, commuters and motorists have endured the traffic caused by the ongoing road concreting along A.S. Fortuna Street.

But it wouldn’t be long, as DPWH 7 announced that the concreting in A.S. Fortuna Street will finish on May 26.

“Our construction has been delayed because our work during the day is sometimes being cut due to the heavy volume of vehicles passing by.” — DPWH 7 Project Inspector engineer Reymond Catalunia

Another cause for the delay is the movement of pipes owned by the Metropolitan Cebu Water District (MCWD) to safer ground to ensure that water supply in Cebu City and some parts of Mandaue City is not cut off.

The Freeman: Money behind killing of high school student?

A 51-YEAR-OLD businesswoman who is a a casino financier was robbed at gunpoint by five men inside her house in Barangay Bankal, Lapu-Lapu City on…