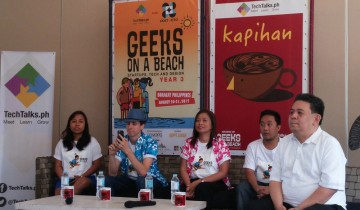 That is among the “ambitious” goals of a Philippine Startup Roadmap that’s currently being formulated by the Department of Science and Technology (DOST) under the lead of the Information and Communications Technology Office (ICTO).

“We would like to establish a framework for the development of startups…The various sectors in the (Philippine startup) ecosystem believe it is possible to achieve these goals,” said Frederick Amores, director of the DOST-ICTO Visayas Cluster 1 field operation office.

There was a debate over suggestions to propose higher targets but a consensus was reached on “more realistic” figures, he added.

STARTUP ECOSYSTEM. Frederick Amores, director of the DOST-ICTO Visayas Cluster 1 field operation office, says that under the 2018 goals of the Philippine Startup Roadmap, government will be able to foster 1,250 startup founders that will lead to the generation of 8,500 high-skilled jobs.

To achieve its goal to create around 500 startups in three years, Amores said they would need funding of US$200 million and are looking at the private sector to help them out.

According to Amores, under the 2018 goals of a Philippine Startup Roadmap, government will be able to create no less than 1,250 startup founders that will lead to the generation of 8,500 high-skilled jobs.

“This will all depend on the cogs of the ecosystem working together,” he added, citing that events like Geeks on a Beach play a significant role in shaping the country’s startup community.

The third installment of Geeks on a Beach or GOAB 3 will happen on August 20-21, 2015 at the Boracay Crown Regency Resort and Convention Center, said Techtalks.ph founder Tina Amper. Techtalks in organizing the event in collaboration with Sym.ph and other parties.

GEEKS ON A BEACH 3. (From right) Frederick Amores, iSkwelahan.com founder Keith Lumanog, TechTalks.ph founder Tina Amper, Dave Overton of Sym.ph and Dulce Lada of TechTalks.ph during the launching of Geeks On A Beach 3.

DOST-ICTO supports GOAB 3 because it can help with the department’s targets for Philippine startups, added Amores.

Aside from promoting technopreneurship, GOAB 3 will help generate leads for tech startups and introduce them to possible venture capitalists and angel investors.

DOST places the tentative number of startups in the country at 100. Amores said the more immediate objective is to define what a startup is and vet the current numbers against this definition.

“When we give figures, it will be based on this definition. We will then be able to come up with a complete inventory in the next few months,” he cited.

Staying in means basking in the view of urban Cebu’s multi-colored lights at night from your spacious home at The Penthouses of Woodcrest Residences. Weekends are fitness days spent at the second floor gym.

Since condominium living can be tight and presents a problem when you have visitors, AboitizLand, Inc. introduces the “transformative living concept” in its Persimmon Studios units at Persimmon Plus along MJ Cuenco Ave.