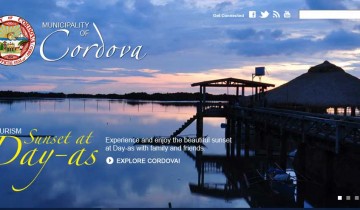 Good news greeted Cebuanos on the first day of 2015 with the groundbreaking of the 3rd Mactan-Cebu Bridge that will link the town of Cordova to Cebu City.

Cordova Mayor Adelino Sitoy said he wants the structure named after the Sto. Nino in honor of Cebu’s protector whose image symbolizes the start of Christianization in the Far East over four centuries ago. (CDN story: Cordova mayor suggests calling 3rd Mactan bridge after Sto. Niño)

The groundbreaking of the Sto. Nino Bridge on Shell Island was held on Thursday, New Year’s Day, which coincided with Cordova’s 102nd anniversary as a town that’s independent from Lapu-Lapu City.

Present during the event were Cordova, Cebu City, and Cebu Provincial officials as well as representatives of the Metro Pacific Tollways Corp. (MPTC), which will fund the P17 billion project. MPTC is an investment group identified with businessman Manuel V. Pangilinan. (Sun.Star Cebu story: Proponents of the P17-B third bridge eyeing middle of 2015 to start construction)

Cordova and Cebu City officials intend to start the 3rd Mactan-Cebu bridge by the middle of 2015.

In other news, several areas in Cebu City and Metro Cebu are experiencing low pressure to no water from 8 a.m to 4 p.m. today, January 2.

The Metro Cebu Water District (MCWD) expects about 5,000 households to be affected by the ongoing work connecting its pipes to a bulk water supply system in Carmen town that will allow it to increase production by 18,000 cubic meters per day.

CUT OFF. Capitol and DPWH will build a temporary steel bridge in Dumlog, Sibonga. (Photo by Dario Gil published in the Cebu Provincial Government Facebook Page)

In coordination with the Cebu Provincial Government, the Department of Public Works and Highways hopes to build and complete a temporary steel bridge in Dumlog, Sibonga before the Sinulog Festival celebration on January 17-18, 2015.

The temporary span will be able to accommodate passenger buses and dump trucks and constructed on the site where the Dumlog Bridge collapsed. The bridge is a vital link in the Cebu coastal highway that traverses and serves the southern towns. (Sun.Star Cebu: Steel bridge ready ‘before Sinulog’ )

Sibonga and two other towns, Ronda and Alcantara, were severely affected by tropical storm Seniang as it made a two-day sweep of the Visayas from December 29-30, 2014. The Cebu City Government said it will be extending assistance to these towns.

The towns will receive P300,000 each from Cebu City. The cash aid will be taken from the P10-million quick response fund of the Cebu City Disaster Risk Reduction Management Council (CCDRRMC). (Sun.Star Cebu: Cebu City Hall extends assistance to 3 towns affected by Seniang )

Although storm warnings were given out a day before Seniang made landfall in south Cebu, these didn’t reach high-risk communities. A Cebu Capitol official said the advisories for pre-emptive evacuation did not reach trickle down to the barangays. (Cebu Daily News: Order to evacuate high-risk areas ‘didn’t reach some barangays’)

We stumbled upon Bella’s Bites Soups and Salads along a line of clothing shops in Marina Mall, Lapu-Lapu City. Doubling as a cafe and restaurant,…