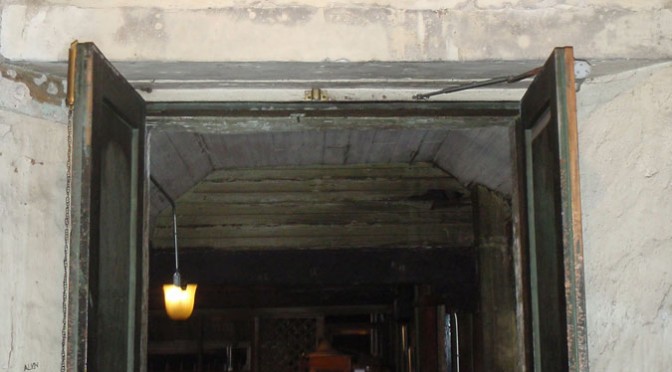 In the hustle and bustle of Cebu City are houses so old, they’ve stood for about 300 years.

One of these structures is located between Calle Zulueta and the narrow side street of Binakayan in downtown Parian, the old Chinese district of Cebu.

It’s a two-storey house of cut coral stone walls, tugas hardwood floors and posts, and terracotta roof connected on its second floor by a walkway to a smaller house believed to have once functioned as the kitchen or an azotea.

Fr. William Repetti, S.J., a seismologist and archivist of the Jesuits, identified this old structure as the “Jesuit House of 1730” and pictures of his visit hang on its walls today. Repetti noted the existence of the house in his book published in 1936.

Jaime Sy, who owns the house and who operates Ho Tong Hardware within the compound, said they bought it from the Alvarez family (owner of Montebello Villa Hotel) who had it since the late 19th century. Don Jose Alvarez, the family patriarch, at one time leased the house to Governor Sergio Osmeña who used it as a meeting place for Cebu’s elite.

The relief plaque bearing the date “Año 1730” on the inside wall above the Jesuit house's entrance door.

A towering fence hides the house from street view and many people, despite the streamer that hangs on the gate with the words “Welcome To The Jesuit House of 1730,” probably pass by the area ignorant of the historical treasure inside. This concrete enclosure rests on the original fence of coral stones that Sy described as even older than the house.

The Jesuit house is now accessible along Zulueta Street where visitors have to pass through the hardware store before reaching the smaller of the connected structures. Wooden stairs lead up to the livable space on the second floor of the house annex that still retains its original wood reliefs and tugas posts and floorboards but already with galvanized iron roofing and renovated walls.

This smaller structure is a bipartite building, the lower storey is of coral while the upper portion is wood.

Sy said a possible explanation for why this structure was built separately but close to the main house and connected to it at the second level through a wooden bridge is that it could have functioned as a kitchen.

“They wanted the kitchen outside of the house in case of fire,” added Sy.

Fr. Rene Javellana, a Jesuit priest, historian, and professor, wrote in a 1989 essay that the smaller house probably served as an azotea or recreation area.

Sy pointed out to us during a guided tour of the Jesuit house a relief plaque bearing the date “Año 1730” on the inside wall above the main house’s entrance door. He said the house served as the residence of the second highest official of the Jesuit society in the Philippines, and it is where other priests of the order or deacons going to or coming from other provinces for missions were received.

Historians say the Jesuits were indeed in possession of the house until 1768 when they were expelled from the Philippines following their suppression in Europe.

Sy believes the Jesuit house is even older than the Yap-Sandiego ancestral home because its second level, like the ground floor, is still made of coral stones. He said stories have it that after an earthquake destroyed a lot of houses and killed many people, the Spanish government decreed that the second level of homes should be made of wood.

The main Jesuit house still retains its original walls of cut coral from the ground to the second floor and terracotta roof. Click on picture to view larger image.

Like churches built during the Spanish period, the main house from the ground to the second floor is made of cut coral. Huge uncut timber serves as posts and supports a heavy terracotta roof, and big planks of tugas wood lined side by side form the floor. These features as well as the corbels that support the ceiling are of the original construction but much, too, has been changed.

The house divisions are much more modern and not how they would have looked in the 18th century, and the presence of disjointed smaller corbels indicates the ceiling is much higher today than when it was first built.

The original staircase, described by Fr. Repetti as having a newel post and decorated with intricate carvings or motifs similar to the Basilica Minore del Sto. Niño monastery, is also gone. It is said the Alvarez family brought the banister and post with them when they left and used these on a house they had built in Bohol.

The original entrance to the property is through a narrow road called Binakayan near Colon but it has been closed off to protect the monograms of Jesus, Mary, and Joseph on the gate’s lintel.

It is widely believed that a tower stood beside the house. Fr. Repetti included a reproduction of an old painting of the house attached to what is believed to be a watchtower for seafaring raiders in his book Pictorial Records and Traces of the Society of Jesus in the Philippines and Guam prior to 1768.

A framed drawing of that badly damaged painting also hangs on the Jesuit house wall.

Historians also argue over the exact year of the house’s construction. Some say the date on the relief plaque was not 1730 but 1750, pointing out the third number from the left resembled “5” more than “3”.

The Sys do not anymore live on the house but have kept it as a repository of antique furniture and other items they’ve collected over the years. Jaime Sy said he intends to preserve it as a testament to Cebu’s rich cultural heritage.

There is no charge for a house visit but prior permission from the Sy family is needed. The Jesuit House of 1730 is a few steps away from the obelisk that marks the start of Colon Street at its northern end. It’s across the Heritage Monument of Cebu built right on the old Parian plaza. Taxi drivers may not be familiar with the Jesuit house so just say you want to go to the Parian fire station, which is 10-15 minutes away from Fuente Osmena.

The room was pitch black, and eerie music was playing from somewhere. We can’t go back so we must push on. A few meters away,…

Nothing compares to the danggit (salted dried fish) produced in Cebu, and the Taboan market is the cheapest source of this specialty food in Cebu…