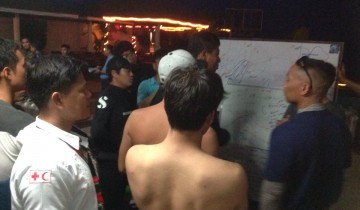 Two of the 3 Korean divers who went missing after diving in Mactan Island have been found alive more than 80 kilometers away in Camotes Island. A coast guard official said the divers were carried away by strong current when they went diving in bad weather in Punta Engaño.

SEARCH. Divers plot their search plan for Korean divers who went missing. Two have been found in Camotes Island. (Photo by Fritz Menguito)

Twelve employees in Cebu who were retrenched by television network GMA 7 yesterday filed a case for illegal retrenchment against the broadcast company. The 4 reporters, 1 desk editor, 3 cameramen, 3 video editors and 1 senior TV crew filed the complaint against GMA chief executive officer Felipe Gozon, Cebu station manager Ann Marie Tan, and program manager Suzanne Salva-Alueta.
They questioned the selection of employees to be let go and the computation of their separation benefits.

“We just want to know if the management had legitimate grounds to remove us. There are questions of law which we want to raise, and after contemplating about this for months, we decided to pursue a case against GMA 7.” — veteran broadcast journalist Jun Veliganio, as quoted in Cebu Daily News.

“If we, who were treated unjustly, do nothing because of fear, what will happen to other laborers? We’re filing this case not just for ourselves, but for all workers.” — Veliganio added to Cebu Daily News.

A call center agent was shot dead before dawn yesterday in the IT Park in Barangay Apas, Cebu City. Deogracias Guda III, 21, died after being shot in the chest.

Police said they are looking into a personal grudge as motive in the killing of Guda, who was reported to be a native of Lipa City in Batangas. The shooting was captured on security camera but the Philippine Daily Inquirer quoted a police official as saying the CCTV video did not capture a clear image of the shooter’s face nor of the plate number of his motorcycle.

LOSING A FATHER. One of the lasts posts on the Facebook page of Deogracias Guda III, who was shot dead in the IT Park.

The Cebu City Government ordered the removal yesterday of another billboard advertising a scheduled concert in Cebu by Vice Ganda. Cebu City Anti-Indecency Board (CCAIB) chairperson Lucelle Mercado, who is also the city administrator, said they have been receiving complaints against the billboards, which showed Vice Ganda surrounded by half-naked men.

“The mayor ordered its removal because he received numerous complaints, which he forwarded to me.” — CCAIB chairperson Lucelle Mercado, as quoted in Sun.Star Cebu

“Police power na na sya when you talk about customs, public policy especially on the element of morality, the state has to come in before minds, especially children, can be destroyed.” — Cebu City Mayor Michael Rama, according to Cebu Daily News

» Families of mb Kim Nirvana-B sinking victims to receive P200,000 each as compensation

» No one, not even VIPS, will be spared from MERS CoV screening at the Mactan airport, says quarantine official

Missing Korean diver Heo Seung Yung was found dead on the shores of a coastal village in San Francisco, Camotes Islands at 5 a.m. on…

Xiaomi has made available its Mi products in retail stores across the Philippines, including in Cebu. The company said the offline availability of their products…