19 Samboan attractions that make it a top Cebu destination 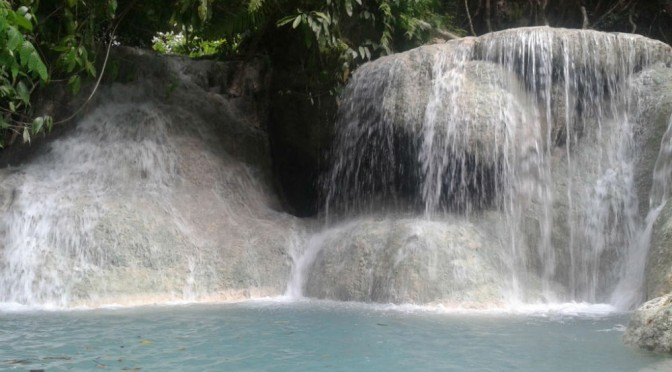 With several waterfalls thriving in the hills and forested areas of Samboan, no doubt a journey to this humble town begins and ends with a splash.

It’s not always about the quantity, of course, but talk about flowing waters — from loud, shallow currents to inviting hushed cascades — it’s on these God-given gifts that Samboan’s strength as a travel destination rests.

The fourth of the five-tier Aguinid Falls in Samboan, Cebu.

Complementing these natural wonders are heritage structures that can magically transport visitors to colonial times. As one of Cebu’s oldest settlement grounds, Samboan plays host to various heritage sites echoing its glorious past.

Water abounds in Samboan, and it’s something one can not only drink but experience.

Fresh, salty, brackish, easy-flowing, challenging, buried in the woods or stretched by the roadside, water is ubiquitous in this resource-laden town.

Here’s a list of Samboan attractions – from waterfalls and other nature spots to heritage monuments – that makes a visit to this town a worthwhile experience. For a handy, mobile guide to travel in the town, with details on getting to its different attractions, download the Samboan Guide at Google Play.

In fact, what greets a weary traveler from an energy-draining ride from the metro is water, specifically the waters of Aguinid Falls in Barangay Tangbo, conveniently situated 200 meters from the national highway.

First of the five tiers of Aguinid Falls.

Aguinid Falls is composed of five different tiers along the Tangbo River, with each level having a unique cascade. One can only reach the other falls by passing and climbing the limestone paths of the flowing waters up to the highest level.

This is why Aguinid is described as the kind of falls that get a visitor really wet, with its shallow waterbeds that also serve as the only pathway up, rocky terrain, and fast-flowing waters.

Going up the falls to the water source, according to a hotel and travel magazine, is like climbing Rapunzel’s long, long hair

The tallest waterfall in Samboan, if not the whole of Cebu, is the one in Barangay Suba. Da-o Falls is a 90 feet vertical drop of water in lush surroundings of endemic and other tree and plant species.

It’s a long trek on a narrow and winding trail to Da-o Falls but the sight of the cascade that flows unbroken from a very high point set amid an untouched environment is quite breathtaking.

The journey to Da-o begins with a walk on a hill followed by a trek that traverses the riverside. The way is not very easy, especially as it involves a steep ascent along a narrow walkway by the slopes holding on to makeshift bamboo railings.

Da-o Falls require endurance and those with fear of heights may find the way difficult.

The flowing water of Da-o drops into a wide pool that’s perfect for a dip on a hot and humid day.

Just a 10-minute ride from Tangbo, which hosts Aguinid Falls, is the Barangay of Bonbon. It is in Bonbon that the Hidden Falls is located. The journey to the cascade requires a 15-minute walk along a difficult terrain and a stream crossing.

The fifth or highest level of the five-tier Aguinid Falls in Samboan, Cebu.

The path down to the 47 feet-tall waterfalls is narrow and slippery and located alongside a cliff. Like the other falls of Samboan, the one in Bonbon has kept its pristine and unspoiled beauty.

A product of wordplay, the name Candayvic is coined from “Kang Inday Marivic,” the falls being named after the wife of the town’s incumbent mayor.

Candayvic is perched on a hill in Cañorong, a barangay adjacent to Suba. Since the area is remote, it can be reached by motorcycles for hire for a fare of P20. Visitors who plan to visit Candayvic should bring food and water supplies as there are no stores in the vicinity.

Aside from its much deeper dive spots, Candayvic serves another very important purpose: it’s the source of the water that flows down all the way to the 90-foot Da-o Falls.

The Samboan coast with its unobstructed view of Tañon Strait and Negros Island.

It’s not clear how the waterfall got its name, but Balay’g Sawa – which means “python’s nest” – is another beautiful waterform in Samboan where visitors can plunge into the cool and clean water.

Balay’g Sawa is nestled in the woody portions of Sitio Calin-ay in Barangay Poblacion. It’s small but its lagoon is wide and perfect for a swim.

To make the way to Balay’g Sawa more accessible, the town of Samboan has recently placed makeshift railings to facilitate going up and down the slopes leading to the area.

This waterfall is located in the boundary of Tangbo and Bonbon so they called it Tabon after the first syllables of the barangays’ names. Like the others, getting to this cascade also requires a ride on a motorcycle for hire or what the locals call habal-habal and a trek along a footpath in the woods.

The town is also home to several other waterfalls with still undeveloped pathways, making a trip to these natural marvels quite a challenge. These include the mini-falls in the barangays of Calatagan (Kang Minggay), Jumangpas (Trabon), and Cambigong (Kanciahan). A journey to these places requires a guide and will be quite an adventure in itself.

There’s no better proof to Samboan’s effort to protect and preserve its marine resources than the Colase Marine Sanctuary in Barangay Colase. It is being managed by the municipality in partnership with a fisherfolk organization.

Diving and snorkeling activities are allowed at Colase for a certain fee.

Aside from Colase, other coastal barangays in Samboan include San Sebastian (Bato), Dalahikan, Tangbo, Bonbon, Suba and Poblacion.

A restored watchtower and belfry at the Samboan town center. It has the best views of the town and surrounding islands.

Within the town center, there is a lagoon that is about a hectare wide and up to three meters deep. It is named Ponong, after the sitio in Barangay Poblacion where it is located.

More lagoon than lake, the water in Ponong is brackish. What makes it interesting, according to locals, is the way the manolong bird dives into its waters to escape hunters.

In Barangay Calatagan, there is a cold water spring that’s perfect for a dip on a hot sunny day. The main mode of transport to the spring is the ubiquitous motorcycles for hire or habal-habal in the town. Habal-habal drivers are familiar with the area and can take visitors to the spring for a fee.

Samboan’s natural wonders are not limited to water forms, they take the shape of mountains and caves as well.

The Escala de Jacob is a set of stone steps that provide coastal residents access to the Samboan Church in olden times.

In fact, the highest peak in Southern Cebu is located in Samboan. It’s called Mt. Bartolina.

The mountain sits on Barangays Bulangsuran in Samboan and Barangay Canang in Oslob. One can see both sides of the narrow island of Cebu, Bohol Strait on the east and Tañon Strait on the west, from the apex of Mt. Bartolina.

The way is not for the fainthearted but it is possible to scale the mountaintop within 15 minutes using a motorcycle-for-hire or what locals call habal-habal. Be warned though that the motorcycle path sometimes narrows to foot-wide trails alongside sheer drops.

Spelunking is also a top to-do list in the town. Like its waterfalls, the way to the town’s unspoiled caves can sometimes border on the difficult to the challenging. Many of the town’s caves are rarely explored natural marvels.

Two of these caverns – Kang Berol and Kang Nancia – are located in Barangay Calatagan. One will have to crawl to get inside the caves since the entrance is quite small but their interiors are huge and host bats, small snakes, and streams.

In Jumangpas, getting to Kang Porning is a short 10-minute walk from the main road.

Samboan also boasts of a rich and colorful past and nowhere is this best seen than in the town center where centuries-old Spanish structures dating back to colonial times still stand.

During Spanish times, the central unit of the settlement of Samboan was built on a plateau about 65 meters above sea level.

Within this perch, Spanish authorities constructed the church, municipal hall, rectory and plaza.

Of these buildings that were central to Spanish administration of the towns, the church still remains and continues to be used today. Construction of the St. Michael Archangel Church dates back to 1842 under the stewardship of Fr. Romualdo Avila.

The Cebu Archdiocese book Balaanong Bahandi said the church, made of hardwood and coral stones, underwent reconstruction in 1915 but it wasn’t clear what alterations were carried out in the structure.

To make it easy for parishioners from the coastal communities to go to church, Fr. Torebio Gerzon had a staircase built on the side of the hill leading to the church in 1878. These steps number 147 and are made of manunggol stones. The stairway is still the best path down to the town’s coastal area.

Made from cut coral stones, the tower is three storeys high and was used in olden times to watch out for and give warning of incoming pirate raiders.

The best views of the seas, surrounding islands, and picturesque town plaza are from the campanario’s vantage point.

Still within the town center is the Samboan Museum with its galleries that display the paintings of local artists as well as stoneware and pottery, wooden implements and tools, religious artifacts and ceramics.

Found at the national highway in the center of the town, the monument pays tribute to the many volunteers who fought for freedom during the war.

Old walls of coral stones can be found in Barangay Basak and San Sebastian. The stone walls or old stone structures are located just near the San Sebastian Parish Church. This may be the reason why this barangay is popularly known as “Bato,” meaning “stone.”

In Basak, locals believe the stone structure is what remains of the old cemetery fence since a graveyard used to exist on the other side of the wall.

To get a handy guide to the town, download the Samboan mobile app guide at Google Play.

Ipanema Selfeet Sunday is happening this October 12 in Cebu. Take an #ipanemaselfeet, upload to Facebook or Instagram, and not only do you get a…

With the number of Cebuanos who dine out growing fast, the Max’s Group, Inc. believes the Cebu market is ready for its upscale American restaurant…